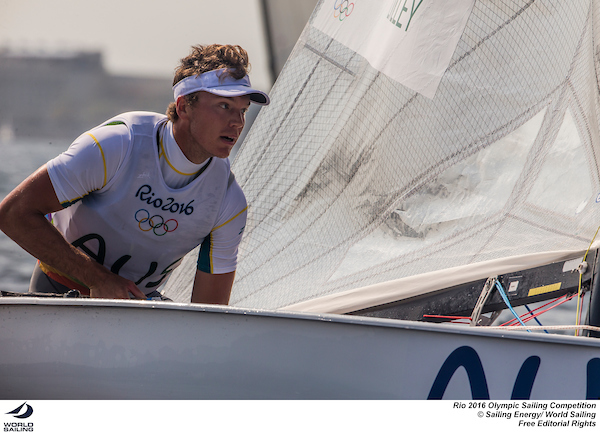 What a difference a day makes! Yesterday the Finn sailors at Rio 2016 complained of farcical conditions where the wind died or was impossible to read as it came straight down off Sugarloaf Mountain.

Today they were on the Niterol course which is the furthest offshore. The wind was blowing 20 to 25 knots from the west and the sea state was massive, according to Jonas Hogh-Christensen of Denmark who recorded a DNF in the final race of the day when he pulled a ring out of his sail. The sail was made by his father's company, so he has limited recourse in that department.

After a poor first race yesterday when he finished 17th in the 23 boat fleet, pre-event hot favourite Giles Scott (GBR) has put together an impressive scoreline in the shifty conditions, adding 3,2,1 to his scorecard. With the drop in effect, he moves to the lead on six points, five clear of Slovenian Vasilij Zbogar and seven ahead of Alican Kaynar (TUR).

These three have established a break on the following pack, with only a 13 point spread between Jorge Zarif (BRA) in fourth and Australian Jake Lilley in 15th.

Four sailors later requested redress after heading to a wrong set of windmark marks, which were laid nearby.

In the first race of the day Scott had to do it the hard way, working through the fleet after being sixth at the top mark to finish second. In the final race he led all the way, leaving the fleet well in his wake.

Compared with Tuesday, Scott was more upbeat about his day. “Much better than yesterday. It was incredibly windy, top end that we would be in, 20-25 knots, big seas, which made for really full on racing, but to come away with a second and a first is a lot more pleasing than my day yesterday for sure.”

“It couldn’t have been more different today. It was a big change in racing and approach and fortunately for me it came good today. The reason we race such long series is to do away with those particularly fickle races and tricky conditions.”

After a poor start to his first Olympics, he said it was important not to panic. “Going into the week you knew the difficult course would be Sugarloaf and if you get that southerly condition it is incredible tricky. I think I could have read too much into it, but it was nice to get into it today and have some different conditions and get away from the thoughts of yesterday. One of the things to remember is that the conditions inside the bay and outside were very different. Racing was a bit more predicable.”

One of the other pre-regatta favourites who has struggled so far is Pieter-Jan Postma (NED), but he says he thinks he could be back “in the game.”

“It was a bit better than yesterday. I had a 12th and a fourth. I was near the front in the first one, but I was struggling a bit with speed but also with placing. You need to be in the shift, and in the gust. With the last race I was in the game. I need to build on that.”

“The results are all over the place. It is hard but it doesn’t matter if it’s hard, as if it’s hard, it’s challenging and that’s good.”

“But it was windy. Big waves. I even sailed three to one today. Most did I think. A tough day.”

As we are seeing in the other classes, every sailor is having bad days and most Gold medals will be won with relatively high scores. With only four races sailed so far, effectively any of the current top 20 can make the medal race and any of the top 15 can win a medal.