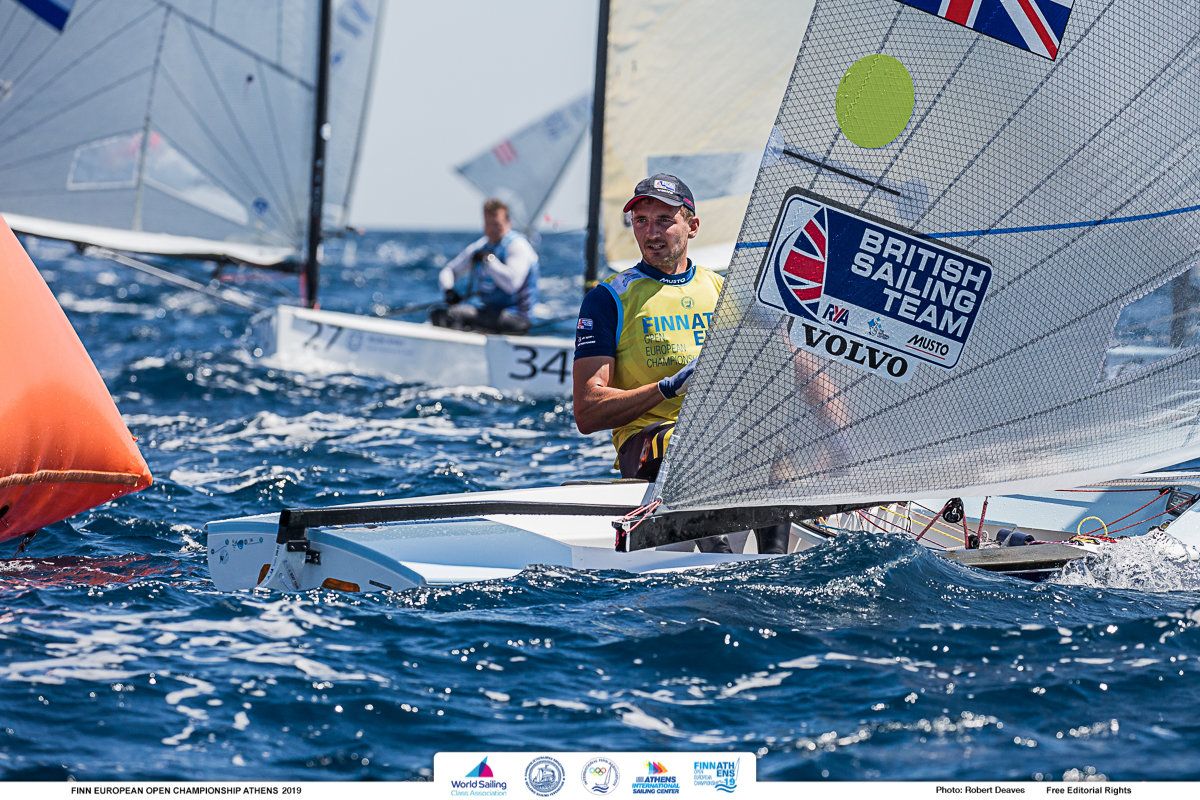 The Finn Europeans in Athens got back on track on Thursday with three more races completed. After losing the overall lead following the opening race, Giles Scott ended the day with a 15-point lead over Hungarian world champion Zsombor Berecz. Andy Maloney, from New Zealand drops one place to third, despite winning the opening race. The other race wins went to Nils Theuninck, from Switzerland and Josip Olujic, from Croatia.

The battle to win the four places in Tokyo took a new turn today with only Norway still among the top four nations from yesterday that haven’t already qualified. A great day from Jorge Zarif moves him up to 10th and second nation, just one point behind Anders Pedersen from Norway, while a fantastic performance from Nils Theuninck puts Switzerland in third, with USA fourth.

With three races scheduled it was with a feeling of déjà vue that the fleet was held on shore again with too little wind on the race course. As the wind increased and the fleet was released they managed three races in a range of conditions. The first race started in 7-9 knots. Oscar was raised at the top mark and the wind continued to increase to 12-14 knots over the afternoon before dropping in the middle of the final race to around 5 knots.

James Skulczuk, from Britain, was fastest to the top mark in Race 6, leading round from Arkadiy Kistanov from Russia and Theuninck. Kistanov took the lead downwind and held it until the second top mark, when Maloney came through to lead into the finish. Kisanov took second and Zarif recovered to take third. Regatta leader, Scott, recovered from the second half of the fleet at the top mark, to cross in 14th, and briefly lost the overall lead to Maloney.

Race 7 started in great conditions, with 12-14 knots, nice waves and brilliant blue skies. After placing fourth in the first race, Theuninck rounded the top mark in the lead and flew downwind to open up a huge gap on the fleet. He never looked threatened, while the pack behind him including Luwen Shen, from China, Ed Wright from Britain, Zarif and Scott were chasing hard. Zarif eventually crossed second with Scott third.

The wind was clearly dropping as the fleet started Race 8, and the course was reduced in size at each mark. Wright was the early leader from Joan Cardona, of Spain, and Max Salminen, from Sweden. The second beat was crucial with lots of pressure changes in the dying breeze causing many place changes. Berecz emerged ahead to lead downwind, but Olujic got the final advantage to lead the fleet across the line from Berecz and Scott.

Zarif said, “I had two pretty good races with a second and a third. The last one was pretty bad when the wind completely died. It’s not an excuse, as I made my discard, but I had a good day, because in a championship like this the scores are super high and if you can make top 12 average you are in a good position to make the medal race.”

“I think I sailed really bad the first two days, but I was still just six points behind fourth place. Everyone has had at least one terrible race, so there is still a lot to play for tomorrow and let’s see if I can make it.”

It has been an up and down week for Cardona, and he is now struggling to be the one to qualify Spain for Tokyo 2020.

“It was not a very good day for me. Yesterday I got a black flag so today it was like I couldn’t discard any bad race. I had a 40th so not the best result and I dropped a bit in the overall, but everything is still open and hoping for better results tomorrow.”

“The conditions were good except the last race when the wind dropped a lot. But conditions were nice and I enjoyed it a lot. It’s my first Olympic qualifier so I am just learning lots of things and trying to improve a bit every day.”

The star performance of the day was undoubtedly Theuninck. The defending U23 European Champion is now leading the U23 championship from Cardona and Finland’s Oskari Muhonen.

“It was really tiring, because the first two races were hard on the upwinds and hard on the downwinds, and long races, so I am really tired right now but also really happy with the day as well.”

“The first two went really well with a fourth and a first and then the last about 13th so it was quite a consistent day.”

“This regatta is the most important of the year. I managed to get back in the game after a not so good first two days. I guess tomorrow, I will try and do the same and see where I end up. It’s been a pretty good year with fifth in Miami and 12th in Palma. So some good results. This regatta didn’t go so well until today, so I am happy that my results are improving.”

“In the last race the wind was dying and I came around the top mark in the top 20 and the it was free pumping, even though conditions were really light, so I just pumped as hard as I could to catch up the front pack. And I managed to gain some places. I missed a few opportunities to get some more but it was a bit intense, a bit stressful and nerve wracking, but it was OK.”

There will be plenty more stress to come with a maximum of three races left to sail. The points are generally high and also quite close, so there is still everything to play for. The top three overall are starting to show signs of pulling away, with a 30-point gap on the fleet, but the medal race split and the Tokyo 2020 qualification is still incredibly tight.

There are two more races in the opening series scheduled on Friday, before the medal race and the final race for the rest on Saturday.

Racing is scheduled to start at 13.30, with live tracking available through YouTube and SailRacer on the event website 2019.finneuropeans.org.