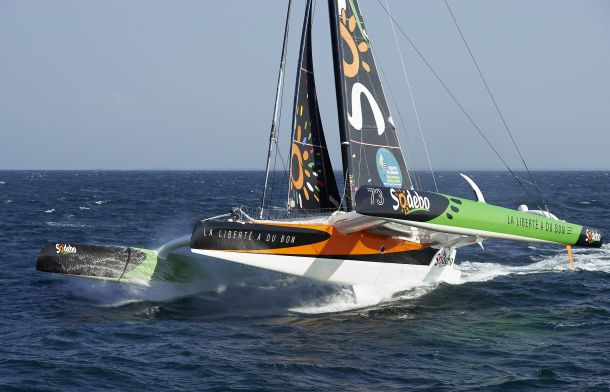 Two of the fastest racing machines in sailing are currently lighting up the top of the leaderboard in The Transat bakerly as they rampage across the Atlantic just a few miles apart.

After two full days of racing in the 3,050-mile classic from Plymouth to New York, the leading pair of Ultimes, Macif skippered by Francois Gabart and Sodebo skippered by Thomas Coville, are thrashing along at average speeds of over 30 knots.

The two giant trimarans are being pushed to the limit and have already covered more than 1,100 nautical miles since the start on Monday afternoon. But most of that distance has been eaten up by miles to the south, leaving the “miles-to-go” figure to the Big Apple still up around 2,500.

This afternoon the two giants were about 30 miles apart about 550 miles west, south-west of the southern tip of Portugal, with Sodebo marginally ahead in terms of distance to the finish by virtue of its more northerly position. Current routing models suggests these two could finish in five days time and will sail a course downwind to the south of the Azores.

About 400 miles north of them, the leading boats in the IMOCA 60 monohull fleet and the Multi50 trimarans are now heading out into the Atlantic after turning to starboard off Cape Finisterre. For these skippers conditions are manageable at present, but in all their minds is an appointment with strong headwinds and big seas that will hit them on Friday morning.

A complex area of low pressure is heading their way and there are predictions of winds gusting in excess of 40 knots in what promises to be a truly authentic Transat ordeal. Jean-Pierre Dick, who is lying in third place in the IMOCA fleet on board St Michel-Virbac, reckons tackling this depression will be critical to the outcome of the race.

“On the weather files, I see a snarling depression arriving in two days,” said Dick succinctly. “We'll have to make a crucial choice to bypass these very strong winds (40 knots in the forecast or more). This will be very physical and strategic: the key point of the race.”

A little further east, Paul Meilhat on SMA in fourth place, and 135 miles behind the IMOCA leader Vincent Riou on PRB, was assessing the same weather feature. Meilhat had a bad start to the race but is happy with his performance to date, having done little in the build-up because his boat was being re-fitted.

“Since the wind came in, it's been going well,” he said. “I have not had a lot of sailing with my boat before the race, so it suits me well. We got up to 30-35 knots at Cape Finisterre with great seas amid all the shipping lanes. Now it’s a case of how to negotiate this Azorean depression: I'll look at what others are doing, but overall, I do not intend to confront 50 knots.”

Like the Ultimes, the Multi50 race features a duel for the lead following the abandonment by Erwan Le Roux with float damage on FenêtréA Cardinal on Tuesday evening. In his place the remaining four boats are being led by Lalou Roucayrol on Arkema and Gilles Lamirè on French tech Rennes St Malo who are reaching along at 20 knots about 25 miles apart, 300 miles due west of Porto.

While they will face the same headwinds as the IMOCAs, more than 400 miles north of them, the third-placed entry in the class, Pierre Antoine on board Olmix is hoping to surf on favourable winds on the northern edge of the same system.

Olmix is the oldest Multi50 in the fleet and is currently the most northerly boat taking part in the race, but her skipper is happy with his choice.

“For now, I only have 15-20 knots from the south-west, but it will build,” he said on the satellite phone earlier today. “It's a little wetter and colder than in the south, but it is an interesting option to be in the north. The boat is going well and the skipper too. It's nice to see that everyone does not follow the same road… We will see how it turns out in the Azores.”

In the Class40 monohulls, meanwhile, the race to the west has begun with all the skippers turning hard-right mid-way across the Bay of Biscay. With nine of the 10 starters still racing after the retirement of Maxime Sorel aboard VandB following a collision with a container ship, the lead is being disputed by Britain’s Phil Sharp on Imerys and Thibaut Vauchel-Camus on Solidaires en Peloton-Arsep who is loving the fast sailing conditions.

“Life on board is very good,” the French skipper reported. “It’s a little bit cold and wet, but it’s good. I just gybed west and the boat is going well. Everything onboard is ok, I’ve had no breakages, I feel good and I’m eating well – it’s all ok.”

“We’ve had about 20 to 22 knots today, we’ve been sailing very fast downwind with one reef. I really like these conditions.”

The pair are only three miles apart in terms of distance to the finish and are heading into lighter winds before conditions ramp up later on Friday.

The class rankings at 1600 BST – updated every four hours.