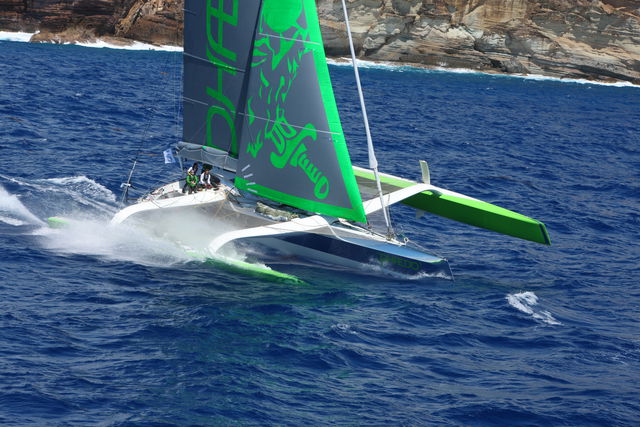 Hang on to your hats – a jaw dropping giant trimaran will make its New Zealand race debut in the PIC Coastal Classic Auckland to Russell yacht race this Friday 20 October.

The MOD70 – just one of seven built in the world – has recently arrived in the country and will participate in a series of events in the Pacific.

Now dubbed Beau Geste by its new owner and skipper, Hong Kong sailor Karl Kwok, the vessel was formerly called Phaedo, one of seven trimarans built to race and chase records around the world.

It will be the second giant multihull to race in Auckland when it joins Simon Hull’s Frank Racing (formerly Team Vodafone).

While Frank Racing currently holds a remarkable number of records, including the overall record for the Coastal Classic, the 70 footer, being ten feet bigger, is on paper destined to take some of them away, but the crew will need to get to grips with multihull sailing first.

Brady says that for Beau Geste Racing, which also owns two grand prix keelboats competing internationally, the step up to the speed and scale of a multihull is a significant one, and they had their first taste of what it meant on the 4,000mile delivery from Hawaii to Auckland.

“It’s the first trimaran we’ve had,” says Gavin Brady. “That means initially our sailing will be about safety. We are very aware of the machine we have got and what is at stake if we make an error. Once we can sail it safely, then we will learn how to push it and get more performance.”

The duo may be joined by Team Australia early in 2018, which Brady says will really put the heat on because three giant multihulls will be very compelling to other skippers racing similar boats overseas.

“There is a big difference between breaking records by yourself, compared with racing a boat next to you. There is a balance between pushing the boat hard, and being safe out there. It certainly raises some eyebrows.”

Frank Racing set the current Coastal record of 5 hours and 13 minutes two years ago, and despite the success of that year’s run, considers there is still plenty of opportunity to improve on the time.

Following the PIC Coastal Classic, Frank and Beau Geste will take part in events with Royal Akarana Yacht Club and Bay of Islands Sailing Week. MOD Beau Geste will travel to Hong Kong with Team Australia, then meet Frank Racing in New Caledonia for the Round Noumea Race, where the three boats will head to Queensland for Hamilton Island Race Week, and return to New Zealand for the start of the summer season and the 2018 PIC Coastal Classic.

Brady says that the multihull world is a very close one. “Simon is a great help,” he says of Auckland based Frank Sailing skipper Simon Hull.  “The multihull way is that you work together and help each other. If you have a problem out there on the water, you rely on each other. Everyone tries hard and there is a lot of communication between the teams.”

Beau Geste is currently berthed at Silo Marina in Auckland waiting for new livery to be a applied in the next spell of fine weather. The crew will fly to Auckland and begin a sailing programme the week before the great race.

The PIC Coastal Classic starts on the morning of Friday 20 October. Sponsored by PIC Insurance Brokers for five years, it is New Zealand’s biggest yacht race and one of the biggest of its type in the world. The race starts off Devonport Wharf in Auckland and finishes off Russell Wharf in the Bay of Islands. Supporting sponsors are 36° Brokers, B&G, Zhik, Railblaza, Doyle Stratis, Yachting NZ and Mount Gay Rum, creating a family of sponsors that help deliver this great race each year since 1984.