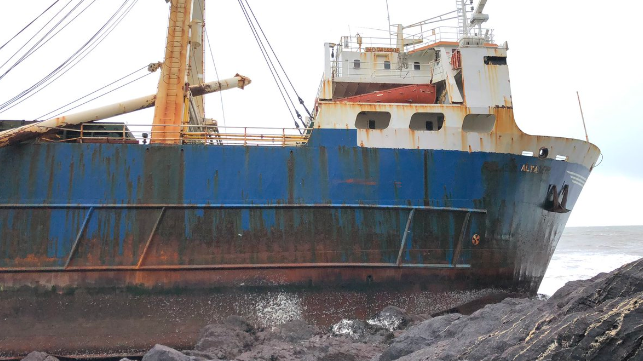 It may not rival the legendary Flying Dutchman, but the MV Alta is a ghost ship all the same.

The 77-metre “ghost” cargo ship made headlines around the world when it ran aground on rocks off Ireland’s south coast last weekend after drifting around the Atlantic for more than a year without crew or passengers on board.

The cargo vessel’s bizarre odyssey came to an end during high seas caused by Storm Dennis when it ran aground near Ballycotton, a fishing village in County Cork, overlooking the Celtic Sea.

Unlike the mythical ghost ships of ocean lore, there is no real mystery around why the Alta, built in 1976, was abandoned. The story began in September 2018 when it became disabled in the mid-Atlantic en route from Greece to Haiti.

The 10 crew members spent 20 days on board as it floated 2,220 kilometres southeast of Bermuda, before they were taken off by the crew of a U.S. Coast Guard cutter. The coast guard said at the time it was working with the ship’s owner to arrange a tug back to shore but the ship’s subsequent movements are unknown.

It is believed the Alta was hijacked twice in the process of being salvaged and came on the radar again in August 2019 when a British Royal Navy ice-patrol ship found it drifting in the mid-Atlantic.

While definitely newsworthy, the abandoned ship’s voyage to Ireland is not entirely without precedent as we see from today’s spooky list of Five Real Life Ghost Ships…

Read the full story at the Free Press, including accounts of the five greatest mysteries, from the Marie Celeste to the Jiang Seng, which was discovered drifting off the Queensland coast in 2006.