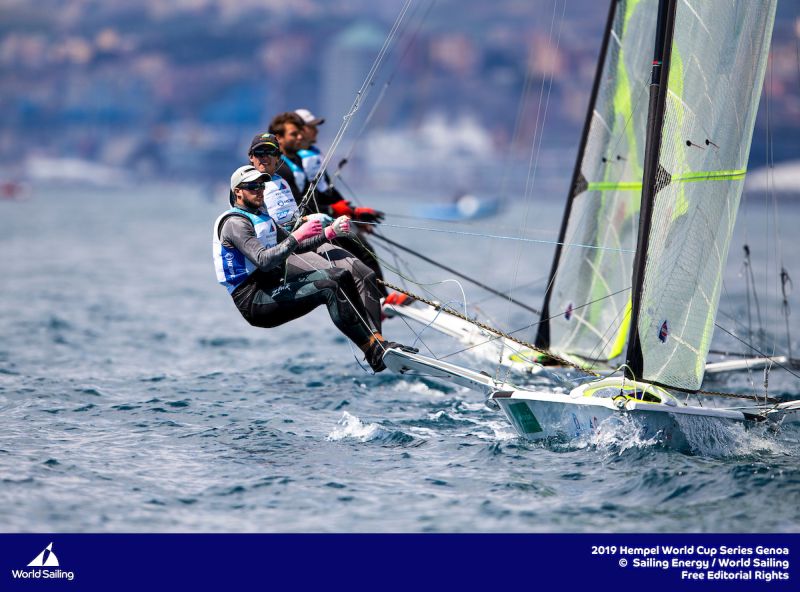 David and Lachy Gilmour in the 49er at Genoa. Photo Sailing Energy/World Sailing.

Germany’s Tim Fischer and Fabian Graf got off to a perfect start in the Men’s Skiff – 49er as the first ever Hempel World Cup Series event in Italy commenced in Genoa with racing in the 49er, 49erFX and Nacra 17.

In a split 65-boat 49er pack, the Germans won both of the day’s races in the blue fleet and were the standout performers across the three Olympic events on the water. Meanwhile, in the yellow fleet, New Zealand’s Isaac McHardie and William McKenzie picked up a race win and a second to occupy the second podium spot in the early stages of the event.

Following racing, World Sailing President Kim Andersen joined the Mayor of Genoa, President of FIV and other local officials in the famous Piazza De Ferrari to officially open the event.

Speaking at the ceremony, Andersen said, “To host the World Cup in Genoa, an iconic sailing city, is a very special feeling. The capital of Italy may be Rome, but Genoa is truly a sailing capital. And as we know, the port of Genoa is one of the biggest and most important, not to mention beautiful, in the Mediterranean, and has been for centuries.

“I would like to thank all you for being here this evening and showing your support for what will be a truly wonderful celebration of sailing.”

Genoa was bathed in sunshine throughout Monday and light winds, varying from 5-12 knots meant that sailors had to think about every move methodically in each race.

Germany’s 49er squad has been excelling recently. At Hempel World Cup Series Miami, four German teams made it to the Medal Race and Erik Heil and Thomas Ploessel (GER) made it to the top step of the podium.

Fischer and Graf finished seventh in Miami and got off to a superb start in Genoa with a pair of victories. Tokyo 2020 is approaching fast and with many teams qualification events coming up, everyone is aiming to peak.

“We [the German 49er team] just keeping push each other,” explained Graf on their recent success, “and we are trying to be better than our team mates. We train a lot and have some good coaching. There are a lot of talented guys in this team and we just want to beat each other.”

When national squads are formed, it can be said that the ethos is to develop as a squad and achieve good, collective results. Whilst this is evident with the German team, Graf demonstrates a hunger to be the best within the squad and knows what he has to do to ensure both he and Fischer are at Tokyo 2020.

“We have three competitions,” he explained about the German Tokyo 2020 selection process. “The 2019 Worlds, the 2020 Worlds after that and then Princesa Sofia. So we just have to try and be the best team. The guys who achieve the most points from that will get the spot. We have an internal scoring system.

And does he fancy his chances? “For sure,” he smiled, “We are the youngsters. We feel no pressure at all. We just try to be good, like today, do it our own way and in the end we’ll see if it’s good for us or if we have to try again in 2024.”

Their compatriots, McHardie and McKenzie, continue to fly the Kiwi flag at the top of the leaderboard following a first and a second in the yellow fleet and Australian brothers David and Lachy Gilmour are in third.

Sweden’s Gross and Klinga top the 49erFX leaderboard on four points after a third and a first in the blue fleet. Fellow blue fleet racers, Martine Grael and Kahena Kunze (BRA), sailed their way to a second and a sixth which positions them in second. Helene Naess and Marie Rønningen (NOR) took the remaining blue fleet race win.

Wins in the yellow fleet went to Stephanie Roble and Margaret Shea (USA) and Tanja Frank and Lorena Abicht (AUT).

The qualifying series in the 49er, 49erFX and Nacra 17 continues on Tuesday at 11:00. The Men’s and Women’s 470, Laser, Laser Radial and the Finn will also start their opening series.