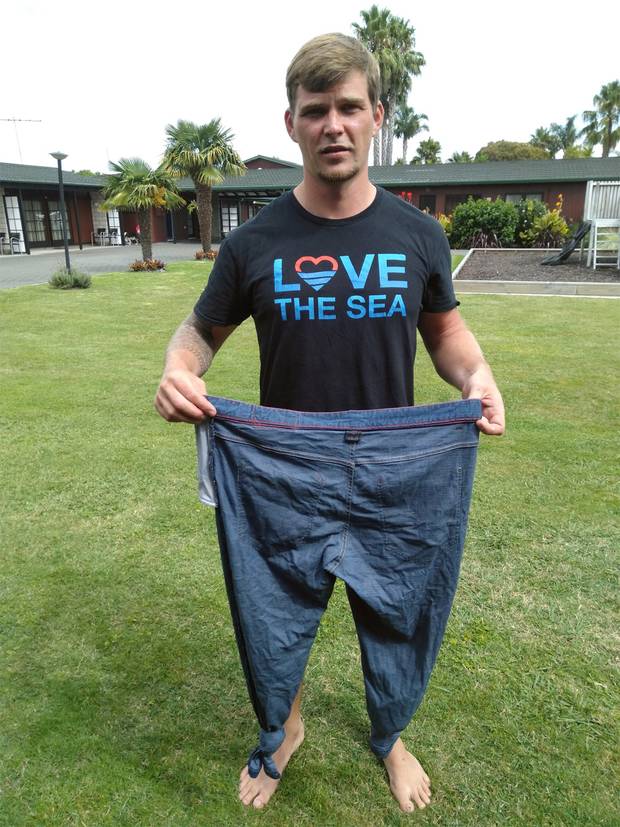 Arne Murke used these jeans as a makeshift life jacket using a technique of the navy seals. Photo NZ Herald.

A German tourist owes his life to a pair of jeans he used as a makeshift lifejacket while lost at sea for over three hours off the Gisborne coast.

Arne Murke was knocked from a 12-metre yacht while sailing with his brother, Helge, about 28km from Tolaga Bay on March 6.

The Murke brothers from northern Germany had taken a commission to deliver the yacht, Wahoo, from Auckland to Brazil.

But while sailing south down the New Zealand coastline in rough conditions at about 2pm, a loose mainsheet caused the boom to “unexpectedly” swing and knock Arne overboard, tangling his arm in a rope.

“I was dragged next to the boat for one or two seconds down in the water, but then the rope got loose luckily, and I was floating in the water not wearing any life jacket. Just my t-shirt, my jeans, that was all,” Arne told the Herald on Sunday.

“My brother started directly to get me but the swell was like three metres. He threw a life jacket with a rope overboard. I couldn't reach that, it was already too far away. Then I think the motor exploded.

“Luckily, I knew the trick with the jeans. Without the jeans I wouldn't be here today, they were really the thing that saved me. “

Murke's quick thinking saw him transform his jeans into a life-saving buoyancy aide; using a technique employed by Navy Seals.

“I saw it many years ago and I always thought if I ever go overboard without a life jacket I'm going to do that,” he said.

“I took a deep breath, took out my jeans, made knots at the end of the legs and inflated the jeans; pull it over water and get air inside and then push it under water – I had like an improvised life vest.”

Arne, 30, had been holidaying and working in New Zealand vineyards prior to setting sail on Wahoo.

He said the yacht delivery job to South America was undertaken with an aim to raise money for his 10-month old daughter, who lives with his girlfriend in the Philippines.

“While I was in the water I was just thinking, I can't leave my daughter behind without a father. That was the biggest motivation,” he said.

Read the full story at the NZ Herald.