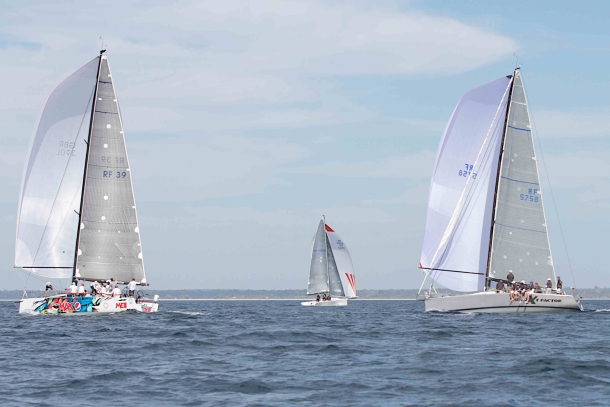 A pivotal moment as both yachts change spinnakers

Noted for its fickle wind conditions at this time of year, Geographe Bay turned it on for the second successive day, with beautifully moderate conditions for a perfect day’s sailing.

Peter Chappell’s new lightweight The Cadillac showed her downwind potential, rounding the second last mark about 200 metres behind The Next Factor and MEII.  By the last mark of the course that deficit had been converted into a 300 metre lead. The wily Chappell sailed well below the other two and slowly worked up alongside them, but the pivotal moment came when MEII changed to her conventional kite.  Signalling the move by setting up the pole some time earlier gave The Next Factor the opportunity to quietly set up for a similar move.  While the two of them were engrossed in trimming their sails, The Cadillac slipped past and drew right away. The Next Factor, which had trailed ME II by a few boat lengths, found a way past on the final leg to narrowly claim bragging rights at the finish.

In the end, the performance of these three in the middle of the fleet was of little significance. Black Betty sailed a well judged race to claim first place, followed by Alan Stein’s Dirty Deeds and Calm, which once again took line honours after an uncharacteristically ordinary start.

YWA President Denys Pearce was prominent with second and third placings, while both Just Cruisin and Lithium scored firsts. The leader board in this very popular division is now very cramped and handicapping has been superb.  Just 15 seconds separated Just Cruisin and y and Large in the first race while Paul King’s Obi-Wan was only 11 seconds back in third.

Don Brooker’s Beneteau Sense 50 Dorade was too good in the jib and main fleet and claimed first and fastest.  Jean-Philippe Hanriot’s little French Kiss was next, with the crew communicating in rapid-fire French. Janet Hornbuckle finished second over the line and third on handicap.

Organisers have planned the regatta to avoid the infamous noonday lull. The first two days of racing began at 1:30pm, by which time the afternoon breeze had kicked in, while day 3 is set down to start at 9:30am, hopefully finishing before the breeze drops out.