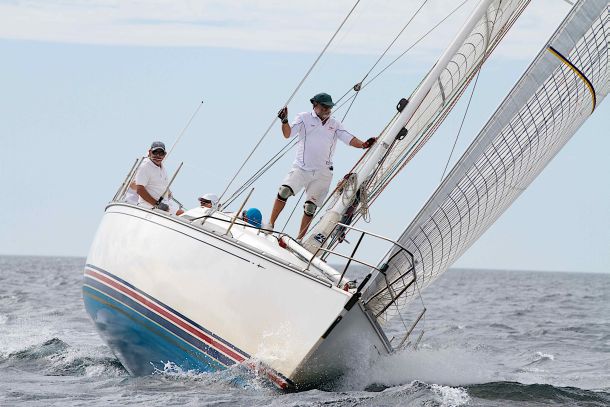 Most fleets will have to wait until the results of the final race to determine the final series winners for each division at Geographe Bay Race Week 2015. Results in most divisions remain remarkably close so we can expect some fireworks in the last race as skippers try to get to the top.

Division 1 IRC has been close throughout the week and with one race to go, single points separate Calm (on 16), The Next Factor (17) and Black Betty (18). Early leader Black Betty elected to go left in the first leg of the second last race of the series and watched helplessly as those who opted for the right picked up big lifts. By the top mark she was fifth to round but in a remarkable comeback, she finished just five seconds behind sister ship Dirty Deeds.

Division 2 IRC seems to have boiled down to a two boat race with Tony Carter’s First 40 Just Cruisin’ leading Graeme Monkhouse’s J122 Lithium by two points. Third placed Deckchairs Overboard is three points behind Lithium and still has an outside chance.

In Division 2 Performance Handicap, Neil Harrison’s Deckchairs Overboard leads on 16 points, from Just Cruisin’ and the Foundation 36 By & Large, sailed by Denys Pearce, equal on 18 points.

Division 3 Cruising Fleet sees Gordon & Di Dunbar’s Spritzig 2 sharing the lead with Rod Turner’s Nexus with Fidra a point away in third. Their tussle in the final race should be interesting.

The Sense 50 Dorade posted another win in the second last passage race and heads the table by three points over French Kiss – the most comfortable position for any fleet leader.

Weather for the final race on Friday morning is forecast to be light and south easterly.