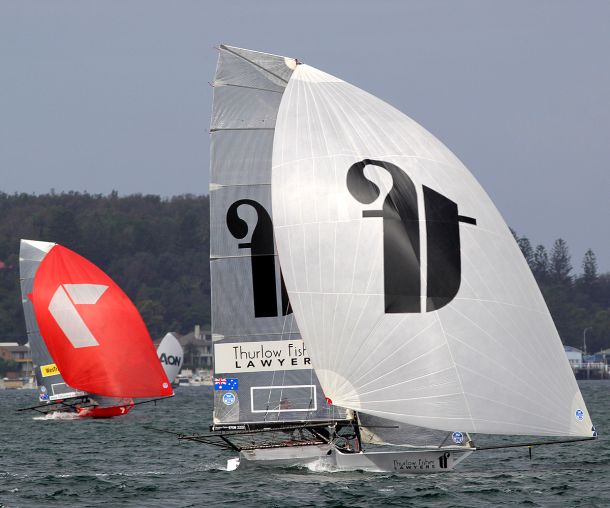 Thurlow Fisher Lawyers broke the previous Gotta Love It 7 domination to win Race 5 of the 2015 JJ Giltinan 18ft Skiff Championship on Sydney Harbour today. Sailing a four lap windward-return course, Thurlow Fisher Lawyers (Michael coxon, Trent Barnabas, Dave O’Connor) won the start at the pin end of the line and sailed brilliantly in the light ENE breeze to lead the bunched fleet behind her by 50s. The lead got out to 2m10s at the halfway mark before a freshening breeze over the final lap of the course saw the margin reduced to 52s at the finish.

Defening champion Gotta Love It 7 (Seve Jarvin, Sam Newton, Scott Babbage) crossed in second place, 1m20s ahead of the third placed USA skiff Harken (Howie Hamlin, Dan Phillips, Skip McCormack), and will retain the title if the team can finish in the first eleven placings in either of the weekend’s races.

After a series of #2 sail NE races, today saw all teams go with their big rigs. Thurlow Fisher Lawyers held a big lead at the bottom mark the first time and things could have been disasterous when sheet hand Dave O’Connor went overboard as the skiff rounded the buoy. Apart from this one incident, the Thurlow team were immaculate and were never in any serious doubt of victory.

For the previously unbeaten Gotta Love It 7 team it was a race they would prefer to forget. They couldn’t match the Thurlow Fisher Lawyers team’s boat speed up the first windward leg and were buried deep in the pack on the first spinnaker run. Trailing in eighth palce at the bottom mark the first time, Team Seven were still more than 2m behind the leader after two laps.

As the breeze freshened, naturally the time margin decreased and Gotta Love It 7 got back to 52s behind the winner but Thurlow Fisher Lawyers was just too good on the day.

The championship continues on Saturday with the last race on Sunday 22 February. The club’s regular ferry will follow the racing, leaving Double Bay Wharf, alongside the clubhouse.