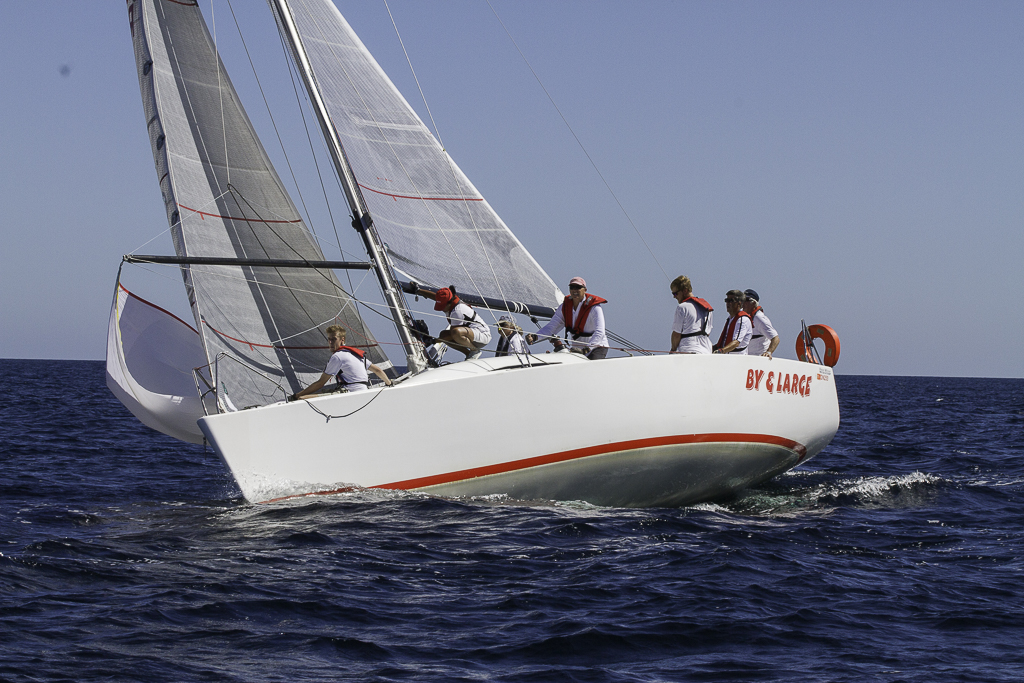 Denys Pearce’s Bakewell-White 36 completed the regatta with a worst placing of second to convincingly tie up the IRC title. Photo Bernie Kaaks.

A blustery start to the Iberia Race, the feeder race from Fremantle to Busselton for Geographe Bay Race Week, began on a Friday evening in the face of a strong wind warning from the Bureau. Winds were predominantly easterly, keep waters relatively flat and making for some super fast times. By noon on Saturday, all yachts had finished the race. By comparison with last year, by Saturday evening the leaders were just approaching the Bunbury turn mark with more than 20 miles to go. Anthony Kirke’s Farr40 Enterprise snapped a stay and lost her rig in the early stages of the race and returned to Fremantle.

In Busselton, M32 catamarans began their Geographe Bay Championship match racing series. It was scheduled as a three day event, but strong winds early in the day caused postponements on both the first two days. It was exciting viewing though, with several capsizes, until the final day. The breeze over the Bay shut down completely. A thick sea fog drifted across the course, preceding a prolonged period of heavy rain. The race committee battled on to eventually complete a full round robin, but abandoned any attempt at finals in the conditions. David Gilmour claimed first place, with Matt Jerwood’s Redline Racing Team as runners up.

The winds causing mayhem on the M32 course did not do the monohull fleets any favours either. There were a number of minor incidents where crews discovered that bits of a boat are a lot more robust than bits of a body. The strong winds of the first two days of Race Week might have provided lots of adrenalin pumping excitement, but it came at a cost!

By contrast, Monday’s conditions were forgettable. The passenger liner Queen Mary 2 arrived overnight and made an imposing sight at anchor north of the township of Busselton, but even that attraction evaporated when a heavy sea mist completely hid her from view. Following the mist came rain. Torrents of it, and freezing cold. Mercifully, the race committee shortened the course which at least allowed a result to be calculated. Had yachts been forced to sail the full distance, the time limit would have beaten them all.

The remainder of the regatta was sailed in perfect conditions. Bright sunshine, light but steady breezes and flat water made for good competition and enjoyable sailing. “We had a terrific regatta,” enthused Barry Brown. “It probably helped that we had our boat sorted out and going really well, but the wide range of wind conditions made it really enjoyable.” He might have been even more effusive in his comments, had he realised that his yacht finished second in the overall points score for his division.

Prizes for the podium finishers in each division received widespread acclaim. A pack of Fermoy Wines, together with cash prizes donated by UK Sails, Boats on Line and Port Geographe Marina put smiles on a lot of faces.

Denys Pearce’s Bakewell-White Foundation36 had to drop a second placing to blitz the IRC fleet with a near-perfect score of 6 points. Laurie Flynne’s Beneteau 34.7 Dynamic was second with 12 points while Ian Hewitt finished third in the Mumm30 Red Fever.

Premier Cruising results varied widely from day to day so the result was in doubt right to the last race. Michael Peel sailed a brilliant final race in Secret Mens Business for a first and fastest, but it was not enough to prevent the Flying Tiger from Albany, Michael Cameron’s Easy Tiger, from winning the Division’s overall trophy with the loss of 22 points. Two Busselton yachts shared the minor placings. Barry Brown’s Electric Tram was second with 25 points and Ken Waller was third with 29 points.

In the cruising fleet the action was no less frantic, though the fleet was slightly smaller. Ross McLaren’s Beneteau44.7 French Kiss V, with a second place in the last race,topped the leader board with a score of 12, two points clear of Peter Sim’s Fidra. Jon Birch was third in Crews Control. The stand out yacht in the fleet was David Clifton’s Thirsty Work, which took line honours in every race but finished fifth overall on handicap results.

Not as popular this year was the Jib and Main fleet – Division 5, which attracted just four entries. Results were close for the whole week, with Tony Mills’ Lady Liza trading places with Gary Griffiths’ Heaven Can Wait. Lady Liza finally topped the table with a third in the final race to finish just a single point clear of Heaven Can Wait.

The consensus at the bar was an enthusiastic endorsement of the program and the end of a most enjoyable week in one of the prettiest corners of our beautiful country.

Full results are available at http://www.rpyc.com.au/sailing/regattas/2-page/538-gbrw-2017.