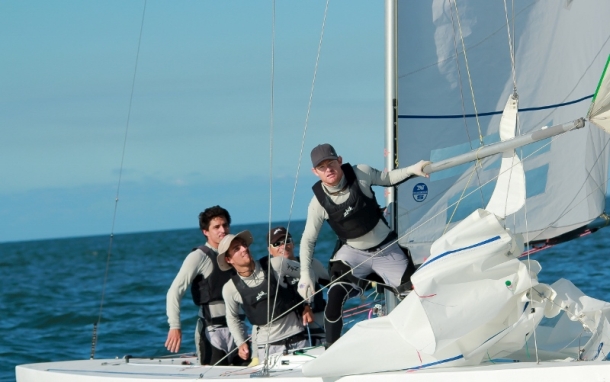 Gen XY are the hot team at the moment in the lead up to next month’s Marinepool Etchells Australasian Winter Championship after winning last weekend’s Brisbane Fleet Etchells Championship being conducted by Royal Queensland Yacht Squadron.

The local team finished on seven points while Melbourne’s Chris Hampton and Pittwater’s Jill Connell fought it out for second and third place. “Chris had a great regatta, probably one the better he has had recently. He has had a consistent team for a while which I think has started to pay off for him,” Chew said.

Gen XY didn’t quite have the regatta all their way. Hampton kept them focused as he and his team of Ben Morrison-Jack and Ian Walker kept their scorecard in the top four for all six races. Connell, a relative newcomer to the class and racing with Wade Morgan and Peter Merrington, also showed superb form to take out a first and a second place.

“In Race 4 on Sunday we had to almost let Jill win to make sure we beat Chris. We covered Chris and lost out to Jill because of that,” Chew added.

He is now ready for a light Mooloolaba event which looks like it could be on the cards for 19th year of the winter regatta. “We have had windy winters for the last few years; generally medium to heavy wind and we have also had some very light ones. We have been lucky not to have them recently, but the team are now ready if we have one this year,” Chew said.

The defending Australasian champion and two-time winner of the annual event, has voiced his wariness of two other strong 2015 title contenders.

Cameron Miles is the top of his list after Miles beat Chew twice this year; once in the Australian Championships in Adelaide and the second time in the NSW Championships in Sydney. “I really want to get one back on him,“ Chew chuckled.

The other one is Hong Kong’s Mark Thornburrow with Malcolm Page in the middle. “Last time he was in Mooloolaba he beat us too.”

While a third Australasians trophy would be a welcome addition to the Gen XY trophy cabinet, Chew is being coy about his expectations of achieving another title. “Two was considered impossible this time a year ago, and people now are talking up three. I will be happy if we are up in the mix and fighting for it,” Chew added.

Chew plans for his team to have two weekend training sessions at Mooloolaba before the Australasians start on June 4.

The Notice of Race and online entry to the Marinepool Etchells Australasian Winter Championship, being conducted by Mooloolaba Yacht Club from June 4 to 7, are available from www.mooloolabaetchells.com.