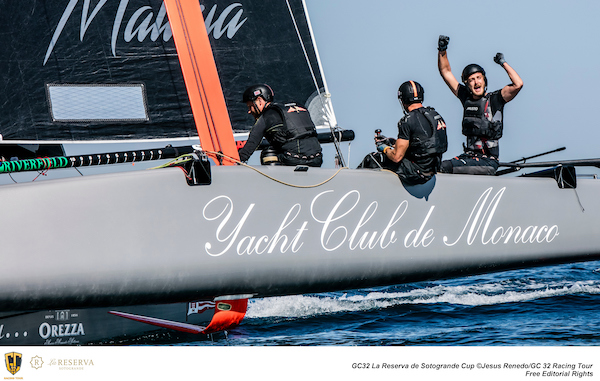 Lighter winds on day two of the GC32 La Reserva de Sotogrande Cup opened the door of opportunity, and the two owner/drivers in the fleet wasted no time in seizing their advantage.

It was an afternoon of soft southerly breeze blowing from the northern tip of Africa a few miles across the Strait of Gibraltar. The 4 to 6 knots of wind made the reaching start more critical than usual, although in the final of the four races held today, the two owner/drivers took very different approaches. One group was fighting hard for the windward end of the start line near the committee boat, and Pierre Casiraghi was locked in a match race with ARMIN STROM as he steered Malizia – Yacht Club de Monaco aggressively every time Flavio Marazzi tried to gain the windward advantage.

Meanwhile Mamma Aiuto! was battling for a good gap at the congested leeward end of the start line, but skipper Naofumi Kamei pulled the trigger at just the right time as he steered the Japanese boat into an early lead around the first turning mark. Kamei held his nerve and led for most of the race but when the Japanese chose the more popular right-hand side of the final windward leg, Casiraghi fancied his chances out to the left, for reasons that one of Malizia’s professional crew explained: “We thought there was a tide line out on the left,” said America’s Cup veteran Alister Richardson. “It seemed to be pushing us up on that side of the course.” Whatever it was, it pushed Malizia just ahead of Mamma Aiuto! in a close cross before the final turning mark and Casiraghi looked understandably happy to have won his first race of the event in southern Spain.

After a tough day in Thursday’s big breeze that resulted in Manuel Weiller being thrown around the front of the boat during a hard deceleration and injuring his knee, the crew of Mamma Aiuto! were much happier on day two, according to Martin Kirketerp. “After yesterday we said let’s just have a clean day, keep it simple, stay out of trouble, and we ended up with two second places from today’s races,” said the 2008 49er Olympic Champion. “We could have won that final race, but there’s no use crying about that, we’re pretty happy with how the day has gone.”

Early on, it looked like NORAUTO was going to prove just as dominant as the French crew had on day one, when Adam Minoprio had taken the winner’s gun in all five races. The French won the first two heats of the day but came unstuck when trying to pull an aggressive pre-start move on Team ENGIE while jostling for position at the leeward end of the line in race eight. ENGIE moved forward and nailed the start, taking an early lead while NORAUTO was banished to the back of the class. ENGIE skipper Sébastien Rogues high-fived his crew as they crossed the finish line in first place, while NORAUTO could only manage sixth, unable to find a way through the fleet in the lighter breezes.

While NORAUTO is no longer invincible, the French team are still the most consistent by far, sitting on 17 points at the halfway stage of the competition. ENGIE’s race win has lifted the team to second overall, although tied for points with Team Tilt who had a less satisfactory day but are still very much in the hunt. In fact there’s very little to choose between five teams right now, with second-placed ENGIE on 35 points and sixth-placed ARMIN STROM just six points back on 41 points.

Even with her two second places today, Mamma Aiuto! is still last by some way after missing a number of races on day one following the man overboard incident on Thursday. But the Japanese crew can sense real progress after a good outing. “We are working on a list of things that we have to improve and that we are improving bit by bit every time we go sailing,” said Kirketerp. It is still early days for Mamma Aiuto! and early days in the world of high-speed foiling. Minoprio’s two years of training with Luna Rossa for the America’s Cup is part of the reason for NORAUTO’s dominance, but today the owner/drivers showed that in the lighter conditions they can mix it with the best of the professional racing world.

On Saturday the breeze looks set to be stronger, around 10 to 12 knots from the east, a direction which could produce some waves after two days of flat-water racing. The GC32 La Reserva de Sotogrande Cup is promising to be one of the biggest all-round tests of the whole 2016 season. Saturday's racing begins at 1300 CET.