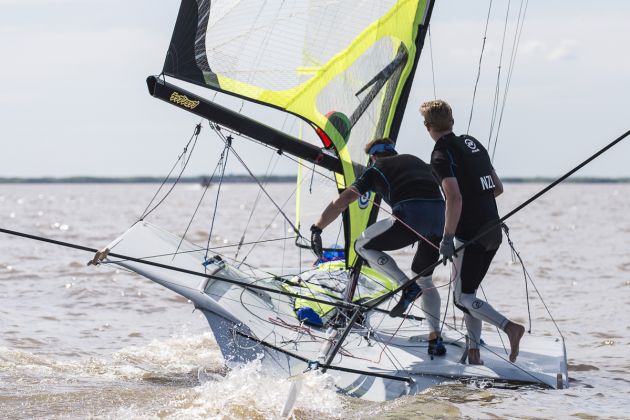 Buenos Aires, Argentina. Day two of the 2015 49er and 49er FX World Championship. Day one proved challenging for most teams out on the waters off San Isidro. Many sailors noted the brown tint to the water makes it extremely difficult to read wind patterns. Even though most sailors were able to train and compete in the recent South Americans, no one boat seemed to figure out conditions without having one very inconsistent finish.

The women's fleet sat on shore with an hour postponement before heading out to a light 8-6 knot breeze that slowly died. Races were attempted on a patchy ENE course, but the first race was abandoned on the second leg due to absolutely no pressure to be had course wide. FX sailors all felt the angst and pangs of boredom as they waited roughly an hour and a half for a steadier, yet still very light, southerly to build and only produce one race for the day.

Spanish duo, Tamara  Echegoyen and Berta Betanzos, finished first in today's only race noted they both thought it was a light, but fair race. Tamara mentioned, “I think they had to wait to get a fair race. If they kept the first race going, it would not have been fair. It's also unfair for the people who were racing the whole time, but the wind kept dropping so much, and we still had half of the upwind, and all of the downwind left, and it would change a lot so it was not fair. So it was good they waited, that's what we think!”

All three Danish boats currently sit in 1st, 4th, and 6th respectively. Nielson/Olsen lead the charge in 1st, followed by Conti/Clapcich in 2nd, and France's Steyaert/Compan rounding out third. Countries breaking the top twenty mark that are not currently qualified for Rio are as follows: Norway (9th & 13th), USA (10th), Ireland (12th), and Canada (16th). Argentina, Japan, Croatia, and one other USA boat all sit just single points behind one another in the top 25. These countries all are chomping at the bit and will be sure the ones to watch moving forward.

The ladies were all in lower spirits with the lack of wind and long wait times from today, but they will have tomorrow afternoon to end their qualifying round in hopefully more breeze and less lag time.

The men's 49er fleet was also in postponement from midday on until about 3:30pm. The breeze at this stage was less variable than the morning and stayed ESE ranging from 8-12 knots.

Taking charge in the fleet are the Lange brothers, Yago and Klaus who climbed the leaderboard with intense consistency today placing 2nd and 3rd in both races. Staying top three in both races gave these boys the edge to jump from yesterday's 7th into 1st. We can argue that local knowledge just might have given the boys the edge today as we see them sitting ahead of favorites Burling/Tuke, but it's the country qualifying spot they are surely after more than the coveted title. German team Heil/Ploessel claimed a win in the first race of the day pushing ahead into 5th, while Croatian team Kostoc/Cupac remain sitting in 3rd even with a BFD, which they were definitely glad to throw out. Argentina, Germany, Croatia, and Poland all sit tightly in the top ten, while two Swedish teams and one other German team round out in the top twenty of teams looking to qualify their country. Japan and Belgium sit in the top 25, but again, by mere single points keeping them there.

The scores are tight and conditions are extremely variable from day to day. The men's 49er fleet will start tomorrow morning ending their qualifying round. If the leaderboard stays similar to its current state we will definitely see the above mentioned countries taking one step closer to Rio.

Other than varying conditions, varying physical states have been seen across both 49er and 49er FX fleets. Many sailors have fallen ill with stomach and gastrointestinal issues resulting in weaker physical performances. Recent thunderstorms and some capsizing into the less than desirable looking brown water have been targeted as the culprits for this mystery sickness that seems to be catching up with sailors as the days progress. Sailors from non-South American countries seem to be affected the most as the water consumed into their systems just may not be as cleanly as predicted…

A report from the Australian Sailing Team:

Racing in the afternoon after a delay and in a light sea breeze, only two races were completed in the 49er fleet with Olympic gold medallists Nathan Outteridge (NSW) and Iain Jensen (NSW) moving up the results ladder into overall 18th after posting a seventh and 17th.

Queenslanders Joel Turner and Lewis Brake were the best performing Australian crew of the day with the pair winning the first race, followed by a fourth. This saw them jump up from 57th into 23rd with one more day of qualifying to go.

After two days and a total of five races in the qualifying series all Australian crews are within the top-30 Gold fleet cut with Australian Sailing Team’s David Gilmour (WA) and Rhys Mara (VIC) following in 27th and Victorians Will and Sam Phillips are ranked 28th.

In addition to the unusual light wind conditions and a downgraded forecast for the next few days, sailors and organisers are facing the challenge of multiple sick cases across the fleet as Nathan Outteridge explains:

“We woke up to a massive thunderstorm today and a pressure system set anywhere between and three and 33 knots and as our weather guy said, ‘this was not a going to be a good day for racing’. So we were actually quite fortunate to have a couple of hours of consistent breeze this afternoon and to get two races in. It’s this pressure system that’s driving the weather and we’re expecting less than five knots again tomorrow. And the forecast for the next few days looks like we won’t get any sea breezes.

“Our results weren’t too bad but it wasn’t a good day for us after Gooby (Iain) last night came down with the local sickness that everyone seems to be getting here. We left him at home all-day and brought him down just in time for the sailing. We’re hoping he will recover and be OK tomorrow, but it was a tough day for him and a good effort to make it on to the water and for us to get some racing in.”

Asked about the source he added: “We don’t really know why everyone is getting sick, but at least a third of the fleet has come down with stomach pains, diarrhoea and vomiting. Few of the Aussies had it before the event started and Gooby has it now in the middle of the event, which is not ideal for us, but sometimes you have to push through these things.”

“Obviously the water here isn’t very clean and with the thunderstorms and lots of rain there’s a lot of crap that’s being pushed on to the racecourse and we’re subject to this. It’s like sailing in Rio and you have to take the right precautions. In Rio everyone knows it’s dirty and takes precautions accordingly and looks after themselves, whereas here everyone gets told it’s just muddy water, but there’s a lot of filth in there as well. And it’s mostly people who are not from South America who are sick and who are usually not exposed to this so we just need to be really careful for the rest of the week.”

There’s one more day of qualifying on Wednesday with the fleet splitting into Gold and Silver fleet from Thursday (local time).

“We’ve one more day of qualifying and we’re looking for some keepers to secure Gold Fleet because right now we’re at the edge of Gold Fleet and it would be pretty disappointing to not make the top-30 cut. But we won’t think about that and hope that Gooby gets a good night sleep and is good to sail tomorrow. That will increase our chances massively of surging forward,” Nathan Outteridge said.

Scheduled in the morning session, the 49erFX only got one race in bringing the overall races to four after two regatta days. Australian Sailing Squad’s Tess Lloyd (VIC) and Caitlin Elks (WA) posted a 16th and are ranked 21st.

“We started the day with pouring rain and the wind a bit all over the place and we got held on shore for about an hour. When we got out there we had nice moderate breeze, started racing but unfortunately half way through the race it glassed out and the race was abandoned. That was unfortunate as we had split from the fleet and where in the top three,” Caitlin Elks said about the conditions.

“We sat around waiting for wind for a few hours before we got to race again in a light breeze. We lost a few places and ended with a mid-fleet finish. The fleet is still pretty tights on points and we’re looking forward to seeing how it evolves over the last day of qualifying. Currently today’s result is our drop, but obviously we don’t want to do worse and definitely need to improve on that tomorrow and ensure we get into the top-22 Gold Fleet and move up the ranks.”