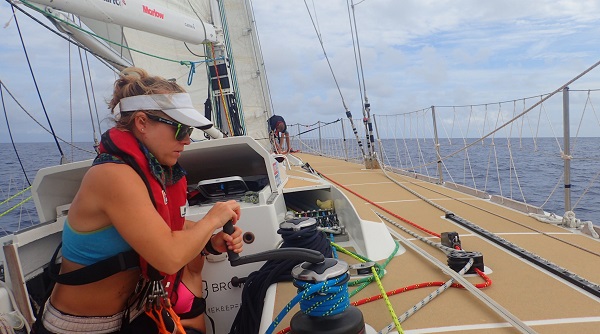 Garmin is holding a narrow 8 nautical mile lead over ClipperTelemed+ in the final 650 NMs of the race to New York on Day 6 of the LMAX Exchange – RACE of THE AMERICAS.

The crews are focused on constant trimming of spinnakers and boat speed as they head downwind in the steady Atlantic Trade Winds. Many of the yachts remain within close AIS (Automatic Identification System) range of each other, making for an ultra-competitive contest.

Visit Seattle is holding on to its third-place position with closest rival GREAT Britain some 50 NMs behind in fourth, just ahead of Da Nang – Viet Nam in fifth.

The yachts will start the Ocean Sprint section of the course today, aiming for the two extra bonus points on offer for completing the time trial the quickest.

A tropical low pressure system is forecast to pass over the fleet tomorrow afternoon local time, bringing sustained winds of around 50 knots, and gusts of 60 to 70 knots predicted by Simon Rowell, the Clipper Race’s Meteorologist.

The front and how the crews weather the storm could likely decide the final leaderboard positions.

Ash Skett, Skipper of Garmin, said his team had been kept on its toes with variable wind direction and strengths to maintain its lead.

“With ClipperTelemed+ putting in some impressive distances and closing the gap, for us it's all about boat speed and focus, a lot can happen in the remaining 700NM of this race.

“Tomorrow we will begin preparations for a visit from Colin. Colin is a tropical revolving storm and he will be arriving from the Gulf of Mexico in a furious mood. Storm force winds are the least that we can expect when he's overhead on Tuesday, but at least they should mostly give us a shove in the right direction. At our current speed, I'm hoping we can squeeze ahead of it before the worst hits,” Ash added.

“What has made it even more enjoyable is that both LMAX Exchange and Derry~Londonderry~Doire have been within AIS contact all day.

“I suspect what has been enjoyable for us has made it far less so for them. With the distances involved and the speed we are currently making, all it will take to go from last to fourth is a favourable squall cloud. With all that's separating us from New York being 700 NMs or so and a band of strong weather travelling north east from the Gulf of Mexico, the race isn't over yet,” Max added.

In his daily weather forecast, Meteorologist Simon Rowell added that in between now and TS Colin hitting, the teams should see the classic signs of an incoming low.

“The wind should gradually veer south then south west and increase, and there should be clouds coming in from the west, getting lower and darker as the front itself approaches.  The northern boats may actually get on the north side of this system. It’s quite a strong low and may have other ideas, so keeping a good record of the visual signs is vital to check its track,” Simon added.

What will the storm bring and how will it affect the Ocean Sprint? Follow all the action on the Race Viewer.

To celebrate 20 years of remarkable achievements in the Clipper Race’s at the anniversary ball, click here to reserve tickets.