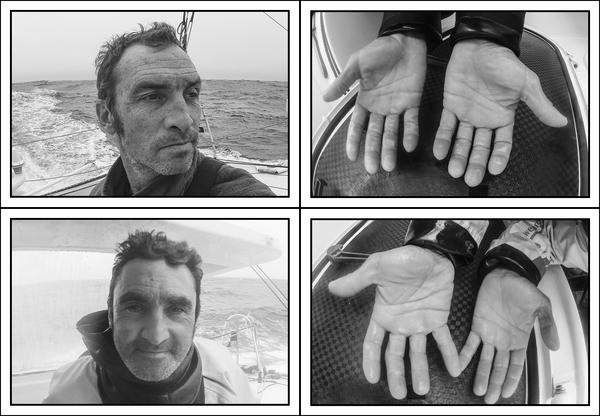 The Garcia brothers have now passed ocean sailing's greatest milestone for their first time. In leaving the Pacific behind the brothers Bruno, 47 and Willy, 42 have now realised their dream of sailing across all of the oceans of the 'Big South', progressing to round-the world-racing together after their each making outstanding performances in transatlantic races during the last 12 years.

Bruno wrote this morning: “These days Willy and I have easily agreed, that this ocean, named the Pacific by Magellan many years ago [Ferdinand Magellan in the 16th C], is a world full of contrasts. You may think we have come to this conclusion because of the large quantity of squalls we have seen, benefited from, suffered, and photographed. Things change very rapidly. You go from a radiant sun to being under a black cloud with heavy rain, even hail sometimes. It seems as if you go suddenly from a fresh spring to an unconfortable wintry autumn.”

Speaking of the prospect of rounding Cape Horn, Willy said yesterday: “It is an incentive and a morale boost. We will have an important leg of the race completed and now we have the ascent of the Atlantic, which is not insignificant in itself.”

The brothers, who have each taken a six months sabbatical from their careers to compete in this race, have passed Cape Horn in tough conditions, with 25 knots of wind from the West and rough seas, with 4-5 metres waves.

We Are Water becomes the fourth boat in this edition of the Barcelona World Race to break through the eastern exit door of the Pacific and return to the Atlantic to start the passage back to Barcelona, looking to complete the 23 ,360 miles round the world race.

Leaders Bernard Stamm and Jean Le Cam on board Cheminées Poujoulat rounded Cape Horn on 25th February at 00:53 UTC, while Guillermo Altadill and José Muñoz on Neutrogena and Anna Corbella and Gerard Marín on GAES Centros Auditivos made it on 28th February at 02:12 UTC and 12:32 UTC repectively.

In just a few hours, One Planet, One Ocean & Pharmaton with Aleix Gelabert and Didac Costa should also cross the longitude of the mythical cape, a nice battle for fourth in the Atlantic is therefore foreseen.

They should be followed by Renault Captur, some two days away from Horn, and some 1,800 miles behind, Spirit of Hungary.