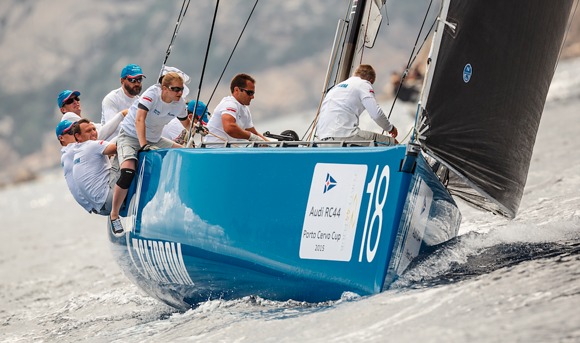 The day started regularly enough with the course set up directly off Porto Cervo with the breeze building to 12 knots from the east-south-east. Igor Lah's Team CEEREF made the best of the beat to lead around the top mark ahead of Team Aqua, but it was Chris Bake's boat, being helmed on this occasion by American Jim Richardson, that nosed her way ahead on the run and held the lead to the finish.

“It sort of felt like if you go golfing and you birdie the first hole, maybe you should go in right then because it isn't going to get any better!” quipped Richardson, who won the 2009 Farr 40 World Championship on these waters against several crews he is racing against here. This includes Aleph Racing's Hugues Lepic and his own tactician on Team Aqua, Cameron Appleton, of whom he said: “We have sailed against each other for a long time, this is the first time we have had the chance to sail together, so it is quite fun to be on his team for once.”

After this race, the wind began shifting wildly and PRO Peter Reggio made the decision to up sticks and move the course a few miles northwest to 'Bomb Alley', where the wind was a more stable 12 knots from the east-north-east.

The second race of the day saw Vladimir Prosikhin's Team Nika, on which America's Cup helmsman Dean Barker is calling tactics, do well out to the right of the first beat. She led around the top mark and never looked back. Sadly Nika sandwiched her win with an 8-9 leaving her in seventh place overall.

With time getting on, a third race was sailed as the wind was starting to develop some significant shifts, with the southeast and easterly breezes fighting each other. As Charisma's Emirates Team New Zealand tactician Ray Davies described it: “On the first beat, a huge left hand shift came through before the start and half of the fleet hightailed it off to the leeward end of the line and were launched up the first beat. Then on the second beat the flip side happened and you had to go right, but the right only paid at the very end. So it was very tricky.”

In particular Team CEEREF and Team Aqua found themselves on the wrong side of the first beat to trail into the top mark. But the winning move came from Bronenosec Sailing Team, which, in fourth place at the time, bucked the trend and rounded the starboard leeward gate, heading right up the second beat. The Russian team subsequently reaped the rewards of both beneficial shift and pressure rounding the top mark with a massive advantage.

“The hero is Michele,” said Bronenosec's owner Vladimir Luibomirov looking with admiration at his team's Italian tactician, Michele Ivaldi. “He made brilliant tactics today and his decisions on the third race were absolutely brilliant.”

Ivaldi commented: “It was one of those days when it came together and we managed as a team to have good speed everywhere and to read the wind the correct way and had a bit of luck. I am very happy the way Vladimir drove and the way the guys trimmed the sails and did all the manoeuvres – it was fantastic team work.”

After three races, Bronenosec Sailing Team leads overall, but only by one point over Team Aqua.

Until the winning move on the second beat, Frenchman Hugues Lepic's Aleph Racing had led around the first lap. “We were first at the top mark, which is always satisfying,” said Lepic, who is sailing with winning helmsman from the 32nd America's Cup, Ed Baird, calling tactics for the first time on board and with legendary Kiwi America's Cup mainsail trimmer Warwick Fleury having also joined the crew. “We are pleased. It is raising all of our games,” said Lepic.

Fleet racing continues tomorrow when the forecast is anticipating 7-10 knots from the north.