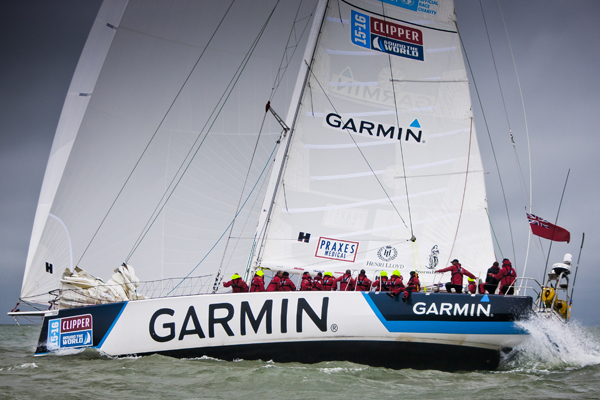 LMAX Exchange Skipper Olivier Cardin’s decision to keep heading south and stay east is paying off, as the yacht has now reached the steady Trade Winds, making 8.6 knots north of the Canary Islands.

GREAT Britain is still just clinging on to its lead as of 0900 UTC, but is only making 3.2 knots in very light winds. Derry~Londonderry~Doire is in second place, also positioned further west, but still not having transitioned into the stronger Trade Winds.

LMAX Exchange Skipper Olivier Cardin says: “Our position in the fleet is ideal. For the last 40 hours we were heading south in a steady wind allowing us to cover about 200 nautical miles per day. Our closest rivals (GREAT Britain and Derry~Londonderry~Doire) have passed west of Madeira and will have to go deep downwind in a very light wind.

“Our plan is to pass between Fuerteventura and Gran Canaria, then continue south to the African coast where about 20 knots of wind are waiting for us. We will gybe there and begin the sprint to the Scoring Gate to take three points and escape alone from the fleet.”

Qingdao and Garmin also chose to take the easterly route, and currently lie in seventh and eighth place.

Qingdao Skipper Igor Gotlibovych said: “With Garmin following a very similar course, we suddenly had a nearby competitor to pit our trimming and helming skills against. Watching Garmin on Automatic Identification System (AIS) for most of the night, we could see the effect of every small adjustment on our relative position. Both Tiger and Dragon watches are discovering their inner animal, determined to squeeze out every last tenth of a knot.”

IchorCoal will slip lines from Porto at 1100 local (1000 UTC) and rejoin the race. In Andy’s honour, the Race Office has created the Andy Ashman Memorial Plate which will be awarded to the fastest team to complete the Race 1 Atlantic Ocean Sprint in the current race and future editions.