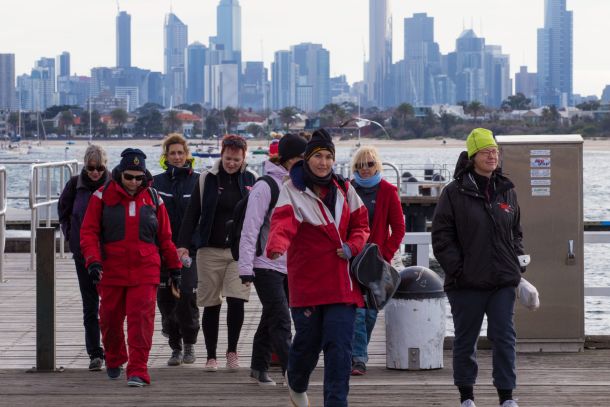 Heading back to the club after AP/A was posted at the Australian Women's Keelboat Regatta. Photo credit Bruno Cocozza.

A gale warning issued late morning by the Bureau of Meteorology for Port Phillip ended any chance of racing on day two of the silver anniversary Australian Women’s Keelboat Regatta, Sunday June 7, 2015.

A few crews racing borrowed boats for the first time with novice crew aboard were relieved by the AWKR race committee’s announcement. Others were prepared for tough conditions and all set to line up. It’s a prudent Royal Melbourne Yacht Squadron rule that racing ceases once an official gale warning is issued.

The Royal New Zealand Yacht Squadron’s crew racing an S80 and the ‘skirts’ from Newcastle Cruising Yacht Club campaigning the Whiting 36 called How Bizarre were layered up for a grey Melbourne winter’s day and ready to tackle the biting northerlies. The ‘skirts’ is an informal program supported by the NCYC to encourage more local women into sailing, and keep them in the sport.

“We were excited and ready with two reefs in the main and the number 3 heady, however it was not to be,” said a disappointed ‘skirts’ trimmer Kristen Anderson. Instead they are heading to the Hawks v St Kilda AFL match. Others opted for the local hot baths and massages at the club, some indulgence after three races were squeezed into a long opening day yesterday.

The race committee went beyond St Kilda’s breakwater at the scheduled time this morning to assess the situation and recorded peak gusts of 32 knots out of the north. The AP/2 flag was hoisted at 1000hrs, the signal to crews to remain ashore for further announcements. Then the Bureau published a gale warning.

With no racing, RMYS commodore and owner of the Adams 10 Jungle Juice Janet Dean had time to talk about the biggest annual regatta the club runs, and the silver jubilee edition.

“The June long weekend is the only time outside the busy season we can get owners to lend their boats and it’s become tradition that the AWKR is on the Queen’s Birthday and opening weekend of the ski season,” said Dean.

“The regatta is competitive but also everyone wants everyone else to do well. First and foremost we are club sailors and we lend crew and gear and offer to mend breakages on other boats. Everyone at the AWKR assists and looks out for one another.”

Ultimately Dean hopes women use the AWKR as a stepping stone to boat ownership. The Australian figures for female ownership remain low, despite the gains made in other areas of the sport. “There are plenty of entry level boats on the market and owner syndicates help share the cost and the upkeep. As an owner I’ve found other owners are very willing to help,” the commodore encourages.

The forecast for tomorrow, Monday June 8, is northerly winds 20-30 knots turning north westerly in the afternoon. The original schedule specified up to six races and it’s the race committee’s intention to run as many of the series’ three remaining races as they can, conditions permitting.

Sailing on a world scale is coming to St Kilda and the RMYS later in the year when the southern hemisphere’s premier annual event for Olympic class sailing, the ISAF Sailing World Cup – Melbourne, moves to its new home – the St Kilda Sailing Precinct.