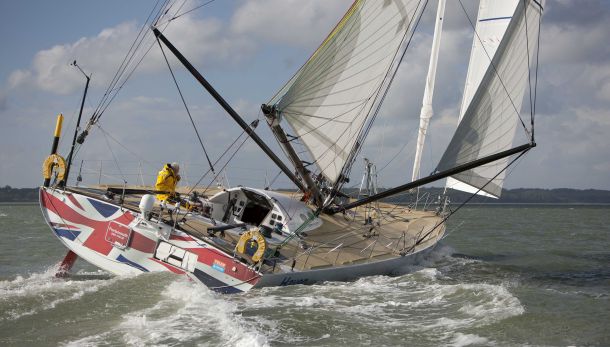 (Tuesday, July 7, 2015) – Gales and prolonged strong winds since the start have taken their toll as the bulk of the fleet reaches the halfway stage of the Transatlantic Race 2015.

On board the Class 40 Amhas, doublehanded crew Mackenzie Davis and Brian Harris have been forced to retire with mast issues and are currently nursing their Akilaria RC3 towards the Azores.

For those following the YB tracker, there were some nervous moments last night as Daniel and Gretchen Biemesderfer’s Mason 43, Shearwater, appeared to be slowly heading in the direction of the Caribbean. Unable to raise the crew, the Race Committee scrambled Sir Geoffrey Mulcahy’s Swan 56 Noonmark VI to assist. As they closed Noonmark’s crew was able to raise the Shearwater crew, who subsequently sent this update: “We sustained some damage: broken boom vang, traveller and importantly mainsail. We're hove to until the weather abates. At that point we'll decide if we can continue racing. However, the boat is fine and the crew are all well and in good spirits. We're all getting some much needed rest.”

A few hours later, Shearwater checked in via Sat Phone with the Race Office and confirmed that they were dropping out of the race and sailing to the Azores to effect repairs.

With boats spread out across some 1500 miles of race track, the weather they are currently experiencing is hugely contrasting. Early this morning, boats off the eastern end of Point Alpha, the ice exclusion zone, were seeing 40 to 50 knots, while at the front of the fleet, Mariette of 1915 had been becalmed and those still closest to America, the fastest boats in the fleet, were uncharacteristically clocking some of the slowest speeds, trapped in high pressure extending from Newfoundland south to Bermuda.

Furthest south among the lead group, the Open 60 Grey Power this morning had 11 to 15 knots from the southwest after a big Monday. “Yesterday we were blasting, really shifting, getting 17-knot averages. We slowed down overnight, and today it is down to 11 to 12,” reported skipper and living legend Sir Robin Knox-Johnston, who in 1969 became the first man ever to sail singlehanded non-stop around the world.

On board Grey Power, he is accompanied by an all-star cast of old friends, including former RORC Commodore and chief blogger, David Aisher, leading yacht broker Bernard Gallay (regular crew on his British Airways catamaran in the mid-1980s) and Dilip Donde, the first Indian to sail singlehanded around the world. “It is lovely having some old and trusted friends with you and enjoying crossing an ocean again,” said Knox-Johnston.

Knox-Johnston is renowned for serving up eye-watering curries on board, but this trip has passed this on. “I don’t do curries when Dilip is onboard; I know when I am outclassed. He makes excellent ones!”

It seems probable Grey Power will be fifth home on the water, but in terms of his progress Knox-Johnston is still kicking himself after making a tactical error after the start. Their only major incident to date was when they ran into something, believed to be a whale, three days ago. Fortunately the boat survived intact and they have continued.

A most extraordinary performance is that of the 1929, 52’ yawl Dorade, which the boat’s eminent yacht designer Olin Stephens raced to victory in the 1931 Transatlantic Race, coming home in 17 days, two days ahead of the nearest competition (for which the Stephens received a ticker-tape parade up New York City’s Broadway). Dorade’s present owner Matt Brooks says that he would like to match or better the yacht’s time; however, this is no mean feat given that today the course is much longer to avoid icebergs and they have experienced heinous conditions.

“A day and a half ago the wind was into the 40s with 15- to 18-ft seas and we were sailing upwind,” said Brooks. “It was the first time we had ever sailed with three reefs.” This morning the wind was 18 knots from the southwest, and another gale was on its way.

Despite this, Dorade is showing her old form, hanging on to the coat tails of boats substantially newer than she is. As Brooks says: “The old girl is keeping up.” Two days ago they set a new speed record of 18.7 knots (compared to 11.4 knots, Dorade’s top speed in 1931).

At the front of the fleet Mariette of 1915 has lost ground on the chasing pack, as she dropped off the back of the depression she had been riding.

“Last night we had no wind at all,” recounted navigator Halvard Mabire. “We never stopped, but we stayed a long time at two to three knots.” Despite the lack of wind, the substantial swell persisted, creating a rolly ride even for the 165-ton classic. “That is very difficult on any boat, but we have eight tons of rigging, masts, sails and gaffs and our main boom is 17 meters long,” said skipper Charlie Wroe of what was clunking around aloft last night.

This morning the wind had returned and the Mariette crew was expecting it to veer from the southeast into the southwest today; and they were expecting to be overhauled by Lucky and Nomad IV in due course. As Wroe stated: “The fast reaching conditions look pretty stable for the next two to three days, so they are going to do a horizon job on us. All we can do is to try and hang on.”