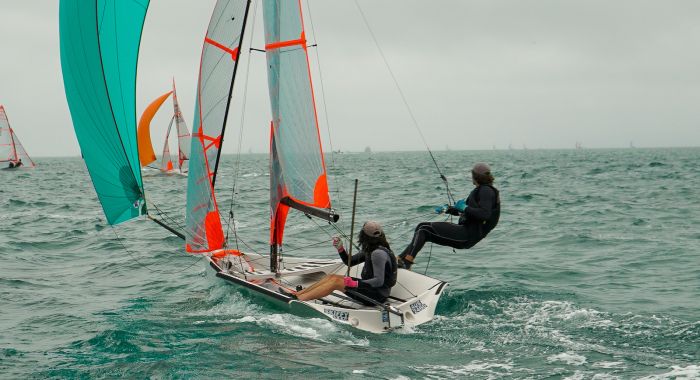 The Australian 29er Nationals came down to a thrilling finish on the final day of racing yesterday as Tasmanians Charlie Zeeman and Ethan Galbraith held on to clinch an emphatic victory at the Blairgowrie Yacht Squadron.

While the pair didn't win the event itself, their match racing tactics on the final day with Western Australians Fleet and Bucktin on AUS 21 allowed New Zealanders Seb Menzies and Blake McGlashan to slide through and win the regatta.

But that didn't dampen the spirits of the Aussie champs, who had the goal of being the first Australian boat.

“It came down to the last race against the WA blokes who put up a really good tussle, and thankfully our match racing skills pulled through for us,” Zeeman said. “We're very happy just to come away with the Australian title, first Australian boat.”

The Kiwis were pretty happy with the outcome as well, which sets them up for a strong year ahead in 2020.

“It's pretty good (to win the event), came to us as a bit of a surprise to be honest,” McGlashan said. “It's kind of good just to beat the Aussies.”

The event, hosted by the Blairgowrie Yacht Squadron, wasn't without its ups and downs – with the effects of the eastern Victoria and southern New South Wales bushfires felt right across the Mornington Peninsula.

Not only was the event suffering from smoke haze and poor visibility in the early stages, there were also many sailors who were participating while their home towns were facing significant bushfire risks.

One family had planned to make the trip from Perth by road to compete in the event, however after getting stopped at the Coolgardie turnoff in eastern WA, headed back home and flew in to ensure they could compete in the regatta.

“We decided that we would drive across because there's six of us in the family and the idea was it would be so much easier if we just drive,” Western Australian 29er sailor Ethany Bates said. “And then we got really stuck, because of the bushfires, at the Coolgardie turnoff.

“It kind of would be a bit of a waste if we don't come and at least give it a shot.”

Ethany said the family tried a few different options in regard to alternate routes, before deciding to head back to Perth and get on a plane.

Ethany, and her brother Xavier, with whom she sails the 29er, were borrowing a boat at the event that had already been measured and registered to compete, so they didn't want to miss out.

Their mother, Amber Bates, said the kids had worked really hard all throughout 2019 for the event, which gave them a little extra incentive to make the trip and compete.

“They love sailing, when you see their passion and enthusiasm for the sport it's really difficult as a parent to say 'no, that's too much',” she said.

“They've planned all year that they were going to come to these regattas and whilst it was really difficult and really challenging, we can make it happen … so we're here.”

29er sailors will now head to the Australian Youth Championships, which will take place down the road at the Sorrento Sailing Couta Boat Club and has significant implications on who will represent Australia at the next Youth Sailing World Championships.