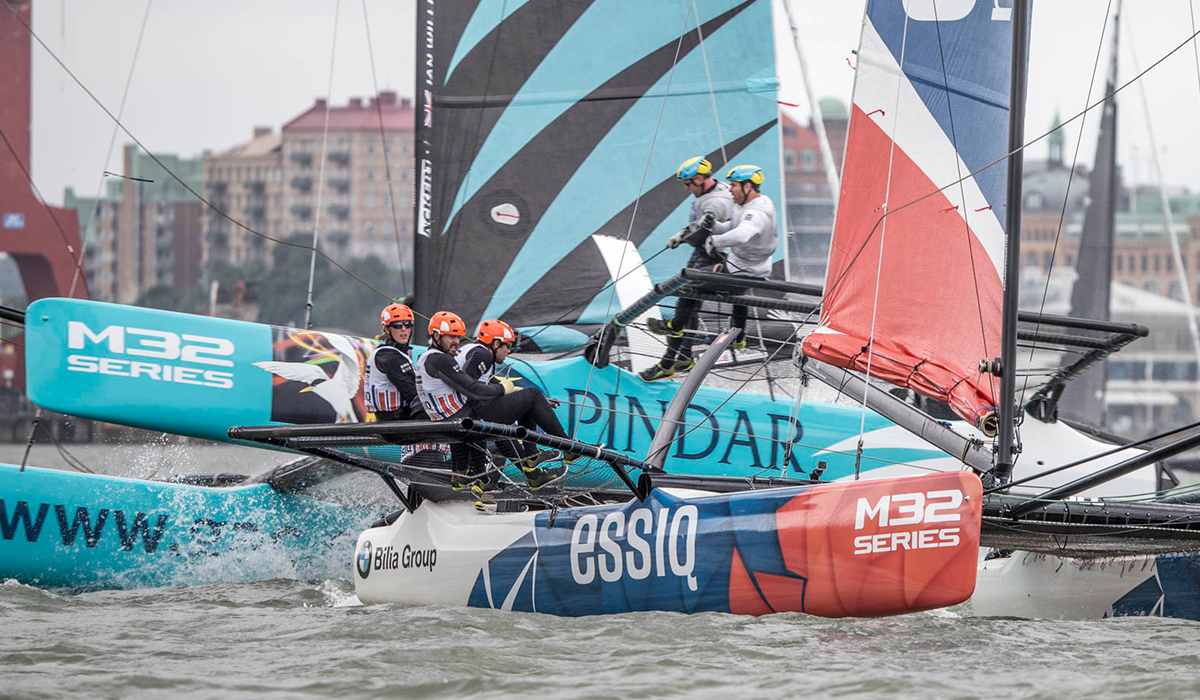 Ian Williams and his team GAC Pindar managed to bring out their best game in the deciding races of M32 Series Scandinavia in Gothenburg. They ended the action filled final day with a win that put them on top of the podium

Despite the rain, there were great sailing conditions during the final day of M32 Series Scandinavia Gothenburg with wind at up to 15 knots. Spectators saw more lead changes than earlier in the event on the tight race course and good boat handling proved to be crucial. The day opened with tight racing and the teams battled for the six spots in the finals where double points where awarded and added to the earlier results.

Ian Williams and Team GAC Pindar have been improving throughout the regatta after a slow start. Today they started with an impressive run and with one top three position after the other, they managed to take over the lead from Taylor Canfield and Us One before the finals. Strong sailing from the home teams onboard Essiq Racing, Rahm Racing and TyphoonX Racing put them through to the deciding races together with the Danish team TREFOR Racing.

In the first out of two races in the final, Dackhammar got a perfect start. His young Swedish crew managed to keep their cool and maintained the lead to the finish. Their win put pressure on Williams and Canfield heading into the last race where Dackhammar once again had the lead at the first rounding. But, a strong gust of wind made Essiq Racing lose control and pushed them past the course boundary. Williams took control after Dackhammar’s mistake and gained a big lead that gave GAC Pindar the win as well as the victory in the event.

“I think more breeze really brings out something special in our team and with these boats it’s more than ever a team effort. With less boats on the start line in the finals we could be more aggressive in the starts and I’m really impressed with how the guys in the team handled the boat today”, says Ian Williams.

“It was tricky and we came in really steep at the rounding when we weren’t able to bare away. It gave us a penalty and it turned out to be crucial. But it was one of very few mistakes today and we are happy with how we sailed. The crowds really gave us a lot of support and that meant a lot to us”, says Dackhammar who was able to recover enough to secure an overall third place in the regatta.

Taylor Canfield had a disappointing end of the regatta but Us One still maintain their overall lead in the series. “Hats off to Ian and his team. They were consistent when it really mattered. And at the same time we didn’t manage to bring our A-game. The team fought hard but it just wasn’t enough this time”, says Taylor Canfield.

The next stage of the M32 Series Scandinavia will be held in Aarhus, Denmark followed by an event in Helsinki, Finland. The final event takes place in Stockholm, Sweden in September. Visit www.m32series.com for more information about coming events and updates about the series.