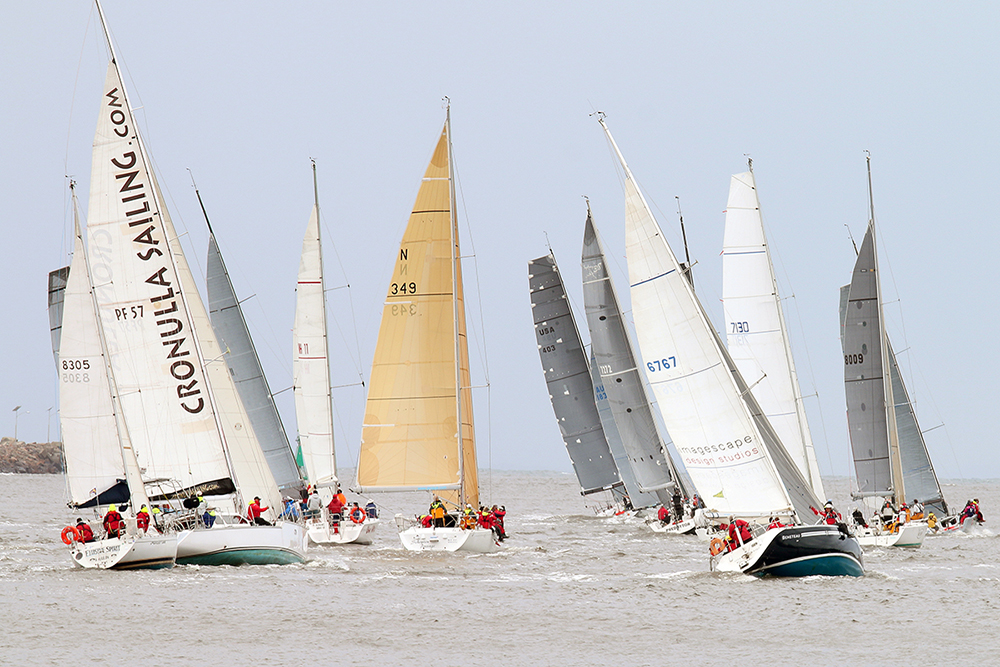 Start of the Newcastle to Port Stephens Race.

A 20-knot sou’easter propelled a record fleet in record time from Newcastle to Port Stephens today, as the feeder race for – you guessed it – a record 2017 Sail Port Stephens regatta in Nelson Bay NSW.

Doug Coulter’s Rogers 46 Shakti from Lake Macquarie recovered from a slow start to power through for a line-honours, IRC and PHS trifecta, with Coulter describing it as a rough and wet ride. Its finish time was just over 2 hours 15 minutes.

Fellow lake boat Ignition, a Farr 400 owned by Ian Bower, also revelled in the power reaching conditions to finish second across the line, around 9 minutes adrift of Shakti, and take ORCi handicap honours. Ignition was also second on IRC and third on PHS.

PHS runner-up was the Archambault M34 Concealed Weapon, skippered by Barry Kelly. The Northshore NXS38 Excapade (Noel Gough) also managed to keep up with the downwind sleds, grabbing a pair of third placings in both ORCi and IRC.

Volvo Round the World skipper Chris Nicholson was aboard the Melges 32 Breezin as a last-minute helm substitute – not a bad one at that. He is enjoying a rare stay at home in Belmont in between projects.

“I haven’t been offshore for a while and it was great to go sailing with mates again,” Nicholson said. “We set the spinnaker for about 3 seconds then fell over, so we just had a nice two-sail reach.”

The Melges hit a top speed of 16 knots.

The packed feeder race augured well for Sail Port Stephens, running April 3-9. The regatta is celebrating its 10th anniversary with its biggest ever fleet of grand-prix and high-performance yachts, along with a packed social calendar.

An estimated 900 competitors, sailing aboard around 110 yachts, will take part. Uniquely for this event, all levels of sailing and age demographics are engaged. The racing also attracts a strong spectator following to Port Stephen’s shoreline.

Among them will be 15 Jeanneau entries, 14 Beneteaus, seven Northshores and a handful of Hanses, as it’s their time to rub gunwales with some of the bigger names in yacht racing.

The racing heat turns up on Friday as the regatta includes an 18-strong NSW IRC Championship fleet with five top TP52s and two Rogers 46s among them. The National titles for the Australian Sport Boat Association has attracted 21 boats, including 6 interstaters, and the Super 12 State title division has eight entries, twice that of last year.

The ‘No Vacancy’ sign is up at D’ALBORA Marina Nelson Bay, regatta central, and at the nearby Anchorage and Soldiers Point marinas.

“One of our objectives is giving this audience an unforgettable and unique holiday experience while visiting Port Stephens and enjoying the family-friendly environment,” Regatta Director Paul O’Rourke says. “That’s been one of the key messages from our competitors – don’t mess with the sailing and don’t mess with the socialising.”

The Junior One-Sail dinghy division breaks away from the keelboat series to remain in the first week of the NSW school holidays (11-12 April) as part of an off-the-beach training program.

Regatta patron Matt Allen, President of governing body Australian Sailing, believes there’s something unique about Sail Port Stephens. “I was talking to some people the other day and asked them to name their favourite regatta – most of them said ‘Port Stephens’, which is interesting,” he says.

“The sailing waters are among the best in Australia and you get some terrific tactical racing against a good fleet of boats. You can also enjoy a couple of beers and have dinner, which brings the friendship and the camaraderie together. You’re not that far away from Sydney … but you’re far enough.”