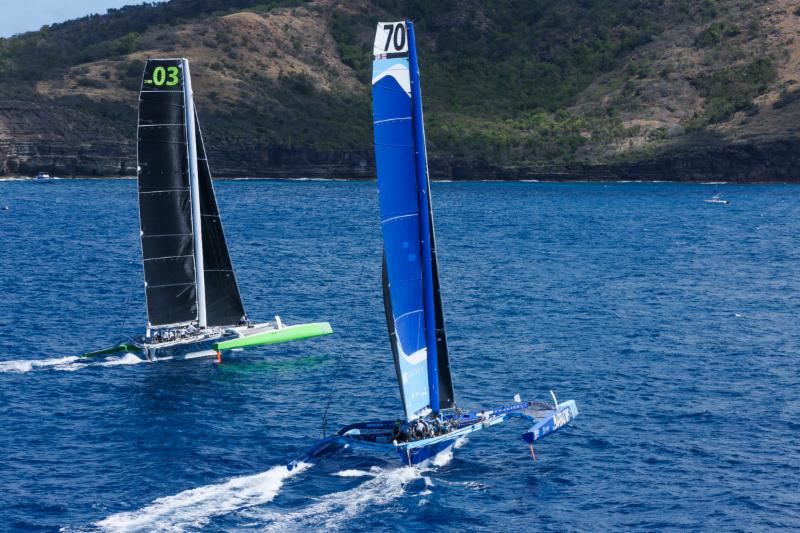 Battle of the MOD70s: Lloyd Thornburg's Phaedo3 and Tony Lawson's Concise 10 at the start © RORC/Tim Wright.

The record fleet for the RORC Caribbean 600 enjoyed a full moon on the first night of racing. At sunset on the first night, all of the fleet had rounded the Barbuda mark, enjoying fantastic sailing conditions and highly competitive racing.

Phaedo3 and Concise 10 were at the front of the fleet enjoying a thrilling high-speed duel, often touching a blistering 30 knots of boat speed. 100ft Maxi, Comanche was blasting through the Caribbean surf in hot pursuit of the monohull record for the course. Four Maxi72s were in a close quarters battle for supremacy, but two of the smaller yachts in the fleet were vying for the overall lead as dawn broke on day two of the RORC Caribbean 600.

IRC Overall
Three yachts in IRC Zero occupy the podium. Steve Benjamin's American TP52, Spookie is the provisional leader for the race after IRC time correction. Spookie was set to round Tintamarre the northern most part of the course this morning. Last night, Spookie and a leading pack of about 25 yachts rounded the chicane at the top of the course weaving past Nevis, St.Kitts, Saba, St. Barths and St.Martin.

This is probably the most technical part of the 600 mile race, with dozens of manoeuvres requiring precision and stamina from the crew. Spookie's crew is a well-drilled short course unit, well versed in boat handling. On Spookie's hip is Piet Vroon's Dutch Ker 51, Tonnerre. The Dutch grandmaster's team is also well versed in short course racing having won her class in last year's RORC IRC National Championship. Tonnerre 4 was less than eight minutes behind Spookie after IRC time correction.

Maxi72
Hap Fauth's JV72, Bella Mente was lying third after time correction and leading the tight pack of four Maxi72s, but only just. Peter Ogden's Jethou and George Sakellaris' Proteus were both in sight. Dieter Shoen's JV72, Momo showed great speed during the first day to round Barbuda, just behind Bella Mente. Momo was the leader after time correction for several hours, but during the night fell back behind the others by some three miles.

MOCRA Multihull
It is all on in the battle between the two MOD70s. Lloyd Thornburg's Phaedo3 has led the multihull fleet since the start of the race but the American MOD70, co-skippered by Brian Thompson has been pushed all the way by Tony Lawson's British MOD70, Concise 10, skippered by Ned Collier Wakefield. Covering an astonishing 380 miles in just 20 hours, the two flying machines were entering the wind shadow of Guadeloupe at dawn this morning.

The 'Guadeloupe Casino' could well decide the victor. The wind shadow west of the French island, followed by a tricky passage from Iles des Saintes to La Desirade is one of the most complex conundrums of the course. Phaedo3 have a slender advantage over Concise 10, but by leading the way, if Phaedo3 stall, Concise 10 will take the advantage without any mercy. After corrected time using the MOCRA rating system. Phaedo3 holds the upper hand from Concise 10 with Jonathan Bush's Gunboat 62, Zenyatta in third.

IRC 1
Grand Soleil 46, Belladonna, skippered by RORC Admiral Andrew McIrvine with RORC Commodore, Michael Boyd as navigator leads the class. On the water, 10 yachts in IRC One were on the wind heading for St.Barths. The majestic 213ft schooner Adix was leading the race overall during the night, but stayed on starboard tack on the beat to St.Barths and lost ground. Erik De Turkheim's French A13, Teasing Machine was second in class just seven minutes behind Belladonna after IRC time correction. Teasing Machine should be very fast on the next leg; a 55nm reach to St.Martin, as will Adix. Andrew Weiss' Sydney 43, Christopher Dragon was in third.

IRC Two
Defending class champion, Scarlet Oyster, skippered by Ross Applebey had a one hour lead, however virtually the entire class was in a close pack beating to St.Barths at dawn this morning. First 40, Arthur Logic, skippered by Oliver Heer was leading on the water and second after time correction, and Dominic Hurndall's Grand Soleil 43, Jua Kali was in third place. Andrew Allner's Swan 53, Ballytrim is six miles behind the leaders but may well move up the rankings after cracking sheets around St.Barths.

IRC Three
Irish eyes are smiling in IRC Three with Conor Fogerty's team from Howth Yacht Club on Jeanneau Sunfast 3600, Bam leading the class this morning. However, the Irish team have a full-on battle with Susann Wrede's German Swan 441, Best Buddies. The two yachts have pulled away from the rest of the class and matching each other for speed on the beat to St.Barths.