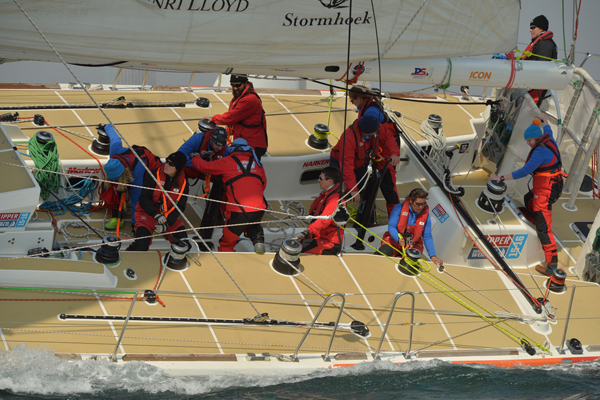 The fleet has had a frustrating 24 hours of light winds and trouble negotiating huge fishing nets in the Yellow Sea on day 2 of the Seattle Pacific Challenge.

The front group is still closely packed together as it heads for the first waypoint off southern Japan. Garmin is still leading the fleet, LMAX Exchange is only 1.2 nautical miles behind and Unicef 3.32 nm behind in third.

The wind has veered round to the north, allowing the yachts to drop their windseekers and fly spinnakers. The winds will build today with gusts around 35 knots in 24 to 36 hours’ time, according to Clipper Race Meteorologist Simon Rowell.

Olivier Cardin, Skipper of LMAX Exchange, described the last 24 hours of racing in his report today, including how fishing nets caused a navigational headache.

“After the start, the fleet was split into two groups: the north and the south. We decided to head for the south, expecting more wind and a veering.Unicef and Garmin were with us and Derry~Londonderry~Doire just a little bit north.

“In the evening, as the wind began veering we dropped the kite and continue close hauled with the Yankee 1. During the night the wind started to ease, we tacked on starboard tack until the windhole. It was then time to play in a real labyrinth of fishing nets. Marked with flashing green and red lights, the game was to find the exit of nets. We managed quite well to not be trapped like a fish.

“I am guessing others like Unicef or Garmin had some issues. In the morning as we were beating in very light wind with Garmin, Derry~Londonderry~Doire and Unicef, a big cloud came from the north with good wind inside. We took this transition and now we are making good speed, under lightweight spinnaker, on direct course to the south of Japan,” Olivier added.

“Another tricky night negotiating the northern fishing fleets' nets, the crew did well in very light winds to eke out the miles and now we find ourselves up with the leading pack thanks to a fortunate cloud.

“The sea is flat calm and a lovely turquoise colour, if it was 15 degrees warmer it could be described as tropical. The kite is up we are on course for Japan and the wind is due to increase to help us on our way,” Max added.

To follow all the action, see the Race Viewer here.To find out more about the stopover in Seattle, click here.