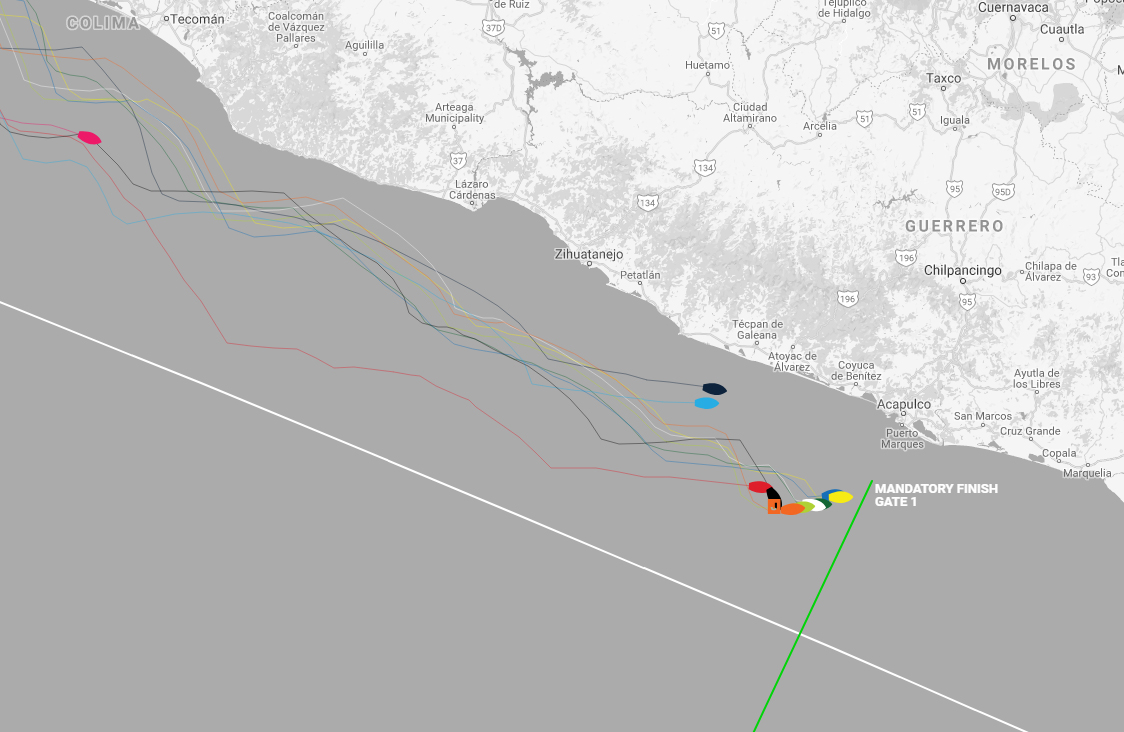 The margin between the first seven teams in Leg 10 of the Clipper round the world race tightened considerably overnight, almost halving to just 18 nautical miles (nm).

Qingdao remains in the lead for a tenth consecutive day, but Skipper Chris Kobusch admits it is getting all too close, saying: “We are less than 40nm away from the first mandatory gate and Visit Seattle, Unicef, Dare To Lead, HotelPlanner.com, and Sanya Serenity Coast are all within 10nm. After over 3,000nm of racing, this is pretty amazing.

“We lost quite a few miles to the other boats but had a few good gybes today and managed to stay ahead of Unicef by a mere 2.5nm. And should we make it to the finish, we will have to try to defend the pole position for another 1,239nm…”

After spending 24 hours in stealth mode, Visit Seattle returned to public view in third place. Skipper Nikki Henderson is relishing the tight racing, commenting: “Phew – about half an hour ago there were six Clipper 70s all within a 4nm radius after 3,000nm sailing. That is absolutely insane. A matched fleet – and matched ability clearly – with a few wind holes to add to the compression. It's great fun out here. Super close racing requiring lots of brain power, concentration, and delicate sailing. Awesome.”

Dare To Lead Skipper Dale Smyth is likewise loving the close competition, adding: “What a day of sailing competition! We make and lose marginal gains on each other and it really is keeping us on our toes and focused on boat speed.”

While the top four teams – Qingdao, Unicef, Visit Seattle, and Dare To Lead – are continuing to stay close to the slightly stronger winds along the Mexican coastline, the fifth and sixth placed Sanya Serenity Coast and HotelPlanner.com have opted to gybe west in attempt to make up some ground. HotelPlanner.com Skipper Conall Morrison reports: “We had a good run last night and had briefly found ourselves in front of Dare To Lead this morning. However, they escaped from our grasp as we held the Windseeker over the Code 1 (Lightweight Spinnaker) a bit too long and they did well in about 6 knots of wind.”

The present finish line for Race 10: The Garmin American Challenge is in an area due south of Isla Jicaron in Panama. However, any of the mandatory gates listed in the course instructions and viewable on the website race viewer, may be used as a finish line should the race office deem it necessary to conclude the race in interest of the race and crew. With that in mind, the teams are working as hard as possible in the lead up to the first of five gates, though some are hoping this gate won't be the decider.

PSP Logistics Skipper Matt Mitchell says: “We are nearly at the first of the gates and our position isn't what we would like so let's hope that the race continues! It looks possible that we can make a few more gates yet before the Clipper Race Office is forced to call the race for our canal transit window.”

As Clipper Race meteorologist Simon Rowell reports, the wind is not set to increase in the near future, with the fleet in less of a pressure gradient due to The Intertropical Convergence Zone (ITCZ), or doldrums, creeping north. But with the spine of Central America generating its own semi-permanent trough, into which a localised gradient is flowing, and the arrival of localised winds due to squalls in the coming days, the fleet will keep moving steadily south.

To see how progress unfolds ahead of the doldrums, keep an eye on the Clipper Race Viewer. You can also read the daily Skipper Blogs in full on the Team Pages, as well as keep up with the latest on board in the Crew Diaries.