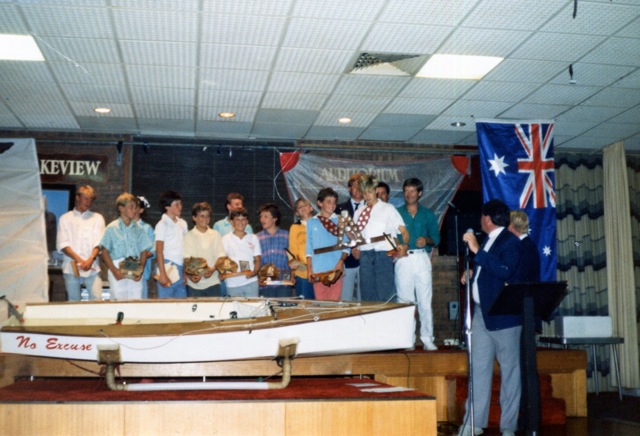 1986: Rupert in white shirt with his crew Matthew Cliffe having just won the Flying Ant Nationals In 'No excuse' which had been built by dad

With such a star-studded top end for this year's race to Hobart, it is easy to overlook some boats. But one yacht popped up on everyone's radar at the recent Big Boat Series – Chinese Whisper.

Owner Rupert Henry has actually completed two previous Hobart's aboard his Sydney 38 Team Lexus (2003, 2004). On top of all that is the long family history of sailing that has led to salt water in his veins.

According to Henry's mother, Jill, “he is very prepared with a very good crew.”

In fact, Rupert started sailing before he even started breathing. Jill Henry was pregnant when she went sailing with husband David on board their Endeavour 24. But she agrees that the revamped 'Jethou' is “the most incredible machine I have ever seen!”

Jill and husband David have just completed their own amazing sailing story. In November they sailed their Buizen 48 back in to Sydney Harbour after completing a ten-year cruising circumnavigation on board. Both are looking forward to seeing their eldest son do well in this year's race but “being a mother I worry for the 18 crew.”

She need not worry too much, Chinese Whisper's crew consists of half with multi-Hobart's under their belts. Also on the crew are two well-known ocean racers: Paul Westlake and Carl Crawfoord, along with double figure racers Braidwood, Hunt and Merrington.

After 'crewing' on board the Endeavour, Henry began his personal sailing career on his Optimist when the Henry family were living in the United States. He won the national under-11 titles. Back in Australia he began sailing, as do so many champion sailors, out of Northbridge in Flying Ants. His own son, Otto is now also starting a career in Optimists.

Progressing on to 420's, Rupert with Chris Meehan as crew won the pre-Worlds in Israel in the early 90s. Plans to campaign a 470 for the 1996 Atlanta Olympics were shelved as the two young men graduated and decided to work on their careers.Chris went on to form Bell Propery Group and Rupert began working with his father's steel fabrication business after graduating as an engineer at UNSW. The sailing bug remained, however, lying not far from the surface.

A Sydney 38 was purchased and campaigned as Team Lexus in both the 2003 and 2004 Hobarts with father David as navigator. Soon after, parents David and Jill purchased their Buizen 48 (hull #16) and began the ten-year circumnavigation.

They started with a circumnavigation of Tasmania, then Australia and then on to South East Asia. A crossing of the Indian Ocean included an encounter with pirates when crossing from Oman to Yemen that was saved when a UK warship appeared over the horizon. From there they transitted the Suez Canal and cruised the Meditteranean for seven years with alternate 6 monthly visits between Australia. In 2013 they crossed the Atlantic, cruised the Caribbean, transitted the Panama Canal and crossed the Pacific. Entering Sydney Harbour last November, in time to watch the son start in his third Sydney to Hobart with possibly his best chance yet in the Judel/Vrolijk 62.

It was Chinese Whisper's first place in the Big Boat Series, even after being recalled at the start, that showed this boat not only has speed but also rates well. Both David and Jill, however, are well aware of the vagaries of the Tasman Sea and Bass Strait. “Who knows what the Hobart will throw up,” says Jill.

And what of the two parents? Are they now settled into a permanent life ashore? “I have itchy feet already,” says Jill ominously.