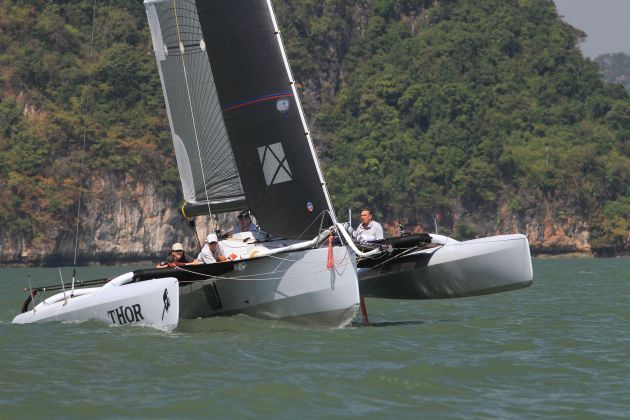 Thor claimed the daily double in Multihull Racing on Day 1 of The Bay Regatta 2017. Photo by Scott Murray.

PHUKET, Thailand – The first day of the 20th anniversary The Bay Regatta was greeted with fresh breeze and as the crew on Top Cat called it, “Champagne Sailing”. Following the opening party at Chandara Resort & Spa on Phuket's east coast, the 31-strong fleet headed north through the stunning rocky outcrops of Phang Nga Bay.

The day's passage race started at Koh Naka Yai and send the sailors north leaving Koh Phanak and Koh Na Ka Ya to port before rounding the first mark, northeast of Koh Yai, to starboard and then heading towards Koh Yao Noi leaving Hin Mot Daeng to port and Koh Batang to starboard before finishing off of Koh Kudu Yai – approximately 17 nautical miles in length.

PRO Simon James made two starts for the competitors today: first off were all the monohulls (15 boats) followed by all the multihulls (16 boats). In the Racing Class, Megazip, skipped by Russia’s Aleksandr Trofimenko, beat Aussie Gary Baguley on Fujin by just over three minutes on corrected time to take first-place honours on day one in this two-boat class.

Cruising B saw Canadian Jim “Yee Haw” Ellis’s Remington, who has won his division in this regatta many times, jump out to an early lead with Thai-registered and Gillow-skippered Poco coming second, followed by Thai-registered Piccolo, helmed by Robert Camera in third. The father and daughter team of Kevin and Mia Gillow on Poco had two other crew mates on board this time, but two years ago, the two of the them sailed Poco to victory just nine months after Kevin had suffered a debilitating stroke.

The Russians were the only nationality to take two classes today capturing also the Bareboat Class with Kinnon, skippered by Stanislav Pechenkin finishing half-an-hour ahead of Aussie Alan Bower on All Sail Asia and All Sail Venus Hunter (Russel Waddy), who ran into some trouble, recorded a DNF.

Fergus Wilmer’s Thor claimed the daily double in the Multihull Racing class, roaring off the start line and never slowing down, ending up with a time of two hours and 42 seconds. Thor was followed by Asia Catamarans Hurricane and Java, who finished only a few minutes behind after corrected time was applied in the eleven-boat class.

The Bay Regatta takes sailors through the three provinces of Phuket, Phang Nga and Krabi allowing participants to experience the best of southern Thai hospitality and the unrivaled sailing grounds in the area. They sail amongst 200-metre high karsts and past hidden bays on their way to a party under-the-stars on an idyllic beach. The party and prize-giving for day one was on the beach at Paradise Koh Yao.