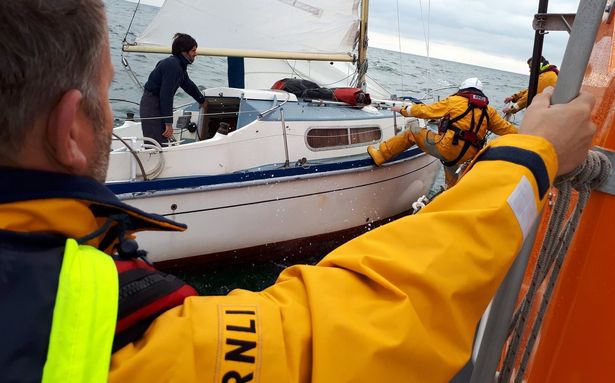 French solo yachtsman is rescued by the RNLI. (Image: RNLI)

A French sailor has been rescued from off the East Yorkshire coast after getting into trouble while sailing across the North Sea, reports Dan Kemp for Hull Live.

The solo yachtsman was heading down the east coast when the RNLI had to go to his rescue after his mast became at risk of snapping.

Lifeboat crews were concerned that the heavy mast could have landed on the vessel or in the worst case scenario, on the sailor who had only recently bought the boat.

The man purchased the yacht, known as ‘Seahorse’ from Scotland according to crewmember Chris Brompton, who was one of the team that made the 23-mile round trip to rescue him.

He had already sailed it down from Edinburgh to Hartlepool and was on the second leg of his journey from the north east town to his home across the channel.

Explaining how severe the incident could have been, Mr Brompton said: “We got an initial report of a yacht with a single man on it. He was having issues with his mast. The fixtures that held it in place had been broken.

“With the pressure of the wind on the sail, it could’ve snapped the mast. It could’ve dropped into the boat or onto him.

“He was tired because of the conditions but otherwise OK.”

The Bridlington coastguard team had to tow the boat back to the seaside town after coming to the man’s aid on Sunday morning.

The ‘Antony Patrick Jones’ volunteer crew launched 11am after the skipper reported an equipment failure while 11-and-a-half miles south east of Bridlington . It has since been revealed that the yachtsman only had limited experience when he ran into trouble.

“He was relatively new. He’d only been sailing for 18 months,” Mr Brompton said. “He bought the boat in this country and was sailing it back to France. He bought it in the UK last year and set off down the coast recently from Hartlepool.”