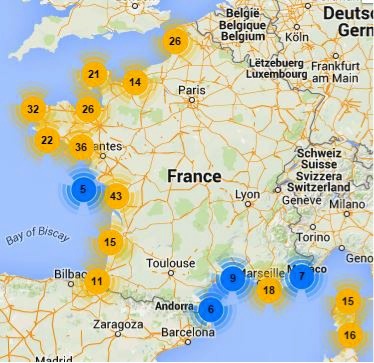 The European Committee for Professional Yachting (ECPY) is petitioning the French government over what the industry association has identified as a ‘catastrophic’ legislative proposal.

On 20 January the French Senate presented a bill to tax yachts cruising in 322 ‘managed marine areas’. However, initially, the National Assembly rejected the bill  ‘recognising the serious impact it might have on the yachting industry.’ The 322 areas constitute an area of 88,175km2, which is equivalent to 23.63 per cent of France’s territorial waters

However, the government has revised and resubmitted the bill, and in a blow for the superyacht industry The Chamber of Deputies passed the first reading of the law NOTRe. It will now be presented to the Senate to be discussed and amended before returning to the Chamber of deputies for the last reading.

‘We have lost the first battle’, an ECPY statement read. ‘Now we must renew our efforts to block the anchorage tax provisions from being passed by the Senate and afterwards by the Chamber of Deputies on the second reading.’

The ECPY has compared the passing of the bill to legislation introduced in Sardinia in 2006, which the Committee claims reduced yacht traffic by 50 per cent over three years.

For links to a petition and the rest of the story, click here.