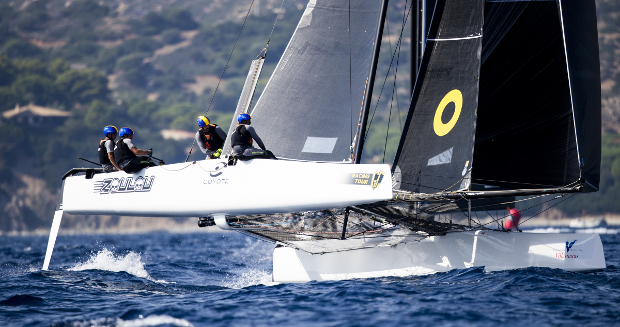 Stand-out teams on the third and penultimate day of the GC32 Villasimius Cup were Realteam and Erik Maris’ Zoulou – the pair ascended the leaderboard to claim the second and third spots, still in contact with Franck Cammas’ overall leader, Norauto powered by Team France.

Earlier this year Zoulou performed very well at the GC32 Lagos Cup where she finished second.

Today the French team showed similar form, claiming back-to-back wins not only propelling her onto the podium overall, but into the top spot of the GC32 Racing Tour’s Owner-Driver ranking. She was one of top scorers in today’s five races – held in southwesterly winds of 12 knots that dropped to eight and slowly backed.

“We had three good ones with some good starts,” said Maris. “The conditions were very nice, although we could have had a few more knots. We were definitely better than yesterday.”

The moderate conditions, albeit with a confused chop, seemed to even the playing field. “We feel more comfortable in this breeze,” agreed Maris.

“But it is so close in this fleet that you could be a hero in one race and a zero in the next and you haven’t done anything different! The start is very important. When you nail that well, it gives you a good advantage.”

In the second race, Zoulou did well hitting the left side of the course, but as Maris observed: “Our tactician tried that yesterday in the last race and we dug ourselves into a hole and finished last by a long way. But he kept trying the left and today it paid off. So he was right, but just too early.”

However, today’s star team was certainly Realteam, the defending GC32 Racing Tour champion, helmed here by Arnaud Psarofaghis, on loan to the team from Ernesto Bertarelli’s Alinghi, as regular skipper Jérôme Clerc is on paternity leave.

The Swiss team scored two bullets today and two seconds, ending the day as top scoring boat. Amazingly this was despite technical breakdowns during the third race and having to replace an injured crew.

“We had many problems with the daggerboard and the winches,” Psarofaghis admitted. “The winch for the gennaker came apart, so we couldn’t use that.”

As a result for the last two races they were hampered by having to cross sheet the gennaker (ie trailing the sheet beneath the boom to the opposite side of the boat), further compounded by the wind dropping to eight knots, forcing teams to use their gennakers upwind as well as down.

The winch blowing up also injured one of bowman Arthur Cevey’s fingers. He was taken to hospital and given a clean bill of health but meanwhile the Swiss team hurriedly had to recruit a replacement which they found in former Team ENGIE crewman Jean-Baptiste Gellée, here in Villasimius coaching Federico Ferioli’s Codigo Rojo Racing.

Remarkably, despite these impediments and curved balls, Realteam still managed to win today’s last two races.
“We had a very good spirit on board – it is very easy with Arnaud,” admitted

Realteam skipper Loic Forestier of their stand-in helmsman. “We like the wind and the reaching starts too. Today it was perfect conditions. Rémi [Aeschimann] our tactician is doing a very good job and we are starting well.”

Today the Swiss seemed incapable of scoring deep results. Even in their disaster race, they still finished fifth. Psarofaghis also noted: “The communication is starting to go really well with the team and mistakes we made yesterday, we didn’t repeat.”

The Realteam breakages were a further example of the family spirit that exists within the GC32 Racing Tour, the Swiss able to continue sailing due to their being lent parts by both JaCarroll’s Argo team and Norauto.

Going into the final day tomorrow, Franck Cammas’ team leads overall, but by a mere four points from Realteam.

Psarofaghis was of the opinion that they might have ended today in the lead had they not broken down. Meanwhile Ben Ainslie’s Ineos Team UK will also be fighting hard tomorrow to regain their podium position. It should be an eventful final day.