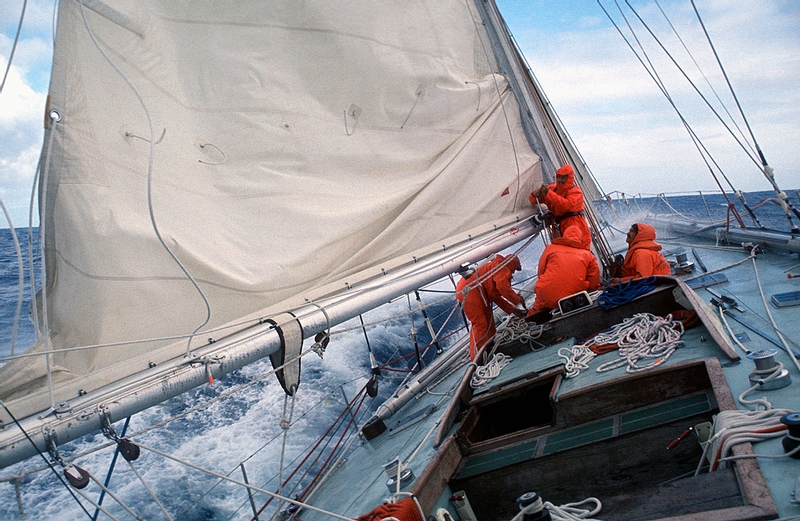 This is the first in a series of features celebrating the strong French heritage of The Ocean Race and produced in cooperation with IMOCA Class, these stories highlight 50 years of the ‘French Connection’, dating back to the inception of the Whitbread Round the World Race in 1973.

In a year’s time, they will be riding the Indian Ocean swell in The Ocean Race (formerly Whitbread Race and Volvo Ocean Race) where the IMOCA Class is making its race debut, alongside the familiar VO65 one-designs.

Spanning 12,750 nautical miles, never before has one leg – between Cape Town in South Africa and Itajaí in Brazil – been so long.

Fifty years ago, sailors from all different backgrounds were competing in the very first crewed sprint around the planet known as the Whitbread Round the World Race. Half a century on, IMOCA and The Ocean Race are rekindling their ties with this crazy epic in a bid to continue its legacy.

On 8 September 1973, 19 boats from seven nations, a third of which were French, set sail from Portsmouth and the green waters of the Solent bound for South Africa. Not only was the atmosphere imbued with the inherent stress of any race start, but also a hefty dose of the unknown as competitors had to negotiate a 27,000-mile sea passage, punctuated by the Roaring Forties and the Furious Fifties in the Indian and the Pacific oceans.

The story goes that a few years earlier, the former aviator Sir Francis Chichester, winner at 60 years of age of the first OSTAR, some four years before Eric Tabarly’s triumph, came up with the idea of a crewed round-the-world race. He did so with some of the UK’s leading lights, including Robin Knox-Johnston, winner of the Golden Globe in 1969, and Admiral Otto Steiner.

It was known as the Whitbread Round the World Race as it was sponsored by the famous British brewer. This first marathon around the planet comprised four long legs from Portsmouth and back via Cape Town, Sydney and Rio.

A certain black boat did not go unnoticed dockside. Pen Duick VI, a 22-metre ketch, was specially designed for the race by André Mauric and was equipped with a depleted uranium keel and titanium components.

The yacht was skippered by Eric Tabarly, who was accompanied by a young and talented crew whose names would soon be familiar to many – Olivier de Kersauson, Philippe Poupon and Marc Pajot The majority of the yachts were slow and heavy, loaded to the gunwales with tins of food and jerrycans of water.

Back in 1973, freeze-dried food and watermakers were not available on boats, but they did boast soft berths, back-up heating to try to dry vinyl oilskins from the fishing industry and even slippers.

Given the unreliability of the SSB communications, it was considered good form to have both a doctor on board – the future explorer Jean-Louis Etienne on Pen Duick for example – and a cook, who floated between watches and worked at the home-style galley stove.

The British press promises an epic head-to-head battle between Eric Tabarly and Chay Blyth on Great Britain II. Tabarly had become headline news when he took victory in the 1964 OSTAR. Former Paratrooper, Blyth, had won renown after setting a single-handed round-the-world record against the prevailing winds in a time of 292 days in 1971.

These two sailors were clearly in it to win it. Recruited by Blyth, his crew were sturdy chaps but hardly sailors, and they complained of having to survive solely on stodgy curry-based meals. It was borderline mutiny.

Upon making landfall in South Africa, Blyth admitted that “even parachutists are human beings…,” which provides some insight into the atmosphere that had developed on board.

It was a very different scenario aboard Sayula II, a Swan 65, designed by the prestigious American firm of Sparkman & Stephens, built in Finland and considered back then to be the Rolls Royce of racer-cruisers.

Mexican billionaire, Ramon Carlin, had it all figured out. He enlisted his son, an amateur yachtsman, along with some brilliant sailors. Whilst the youngsters got on with the sailing on deck, the skipper and his guests made the most of it.

“We have alcohol aboard and we sometimes have a drink together after dinner or at the end of the watch when we’re soaked and chilled to the bone,” he bon viveur said.

“Some pay no heed whatsoever to the fact that we have some women aboard (notably Paquita his wife). Their presence in an excellent thing…”

All the same, the legend doesn’t really explain how many women there actually were on board and, ultimately, the preferred option was that all of them would step off the boat in Cape Town and join their spouses at the stopovers instead.

Aboard Pen Duick VI, though, there’s a guitar, songbooks and Châteauneuf du Pape – Tabarly’s favourite wine – the accommodation is much less cosy, the crew opting to push the boat hard.

On board footage shows the off-watch crew bounding up on deck in their underpants with no harnesses on to help douse the massive spinnaker during a broach in a fierce squall, the boat rolling from side to side. It’s a miracle that there aren’t any casualties.

The race favourite will lose all hope of securing the win when the mast breaks and a new one had to be stepped in South Africa. This was another crew who spent more time using their toolbox than racing.

On the British-flagged boat, a 25-year-old blond-haired New Zealander is competing in the first of his five consecutive Whitbreads. He goes by the name of Peter Blake and he’s enlisted as a general all-rounder.

In his logbook he says: “We’ve never sailed on this boat before and the race start heralds our first ever sea passage on her! We finish off the interior accommodation in the Solent.

“Fortunately, the weather’s fine… However, we fail to check that the heads are disconnected and after a week at sea, we realise that everything’s draining into the bilge where the tinned food is stored. In the panic of the start, we’ve stowed the tins without referencing them and now the labels have come off so when we open one it’s always a surprise!”

Philippe Facque: “I was 21 and I got the opportunity to race around the world!”

Following a month at sea, Sayula II takes the win on corrected time ahead of the comfortable Nicholson 55 named Adventure, and Grand Louis skippered by Frenchman André Viant.

The race is merciless and the skipper of the Polish boat Otago, a good seaman but a registered amateur, says out loud what a lot of people are thinking: “It’s really tough to live in such a limited space in very close quarters. Even rats couldn’t live on top of one another like that without quarrelling from time to time!”

Listening to Philippe Facque, crew for André Viant in 1973 and today the Managing Director of the CDK Technologies yard, the memories have a rather different flavour. Two years earlier, and much to the displeasure of his parents, Facque had traded his A-level oral exams for a shot at his first transatlantic sea passage.

With Viant quickly spotting his talent for driving a boat, Facque was offered a ride aboard Grand Louis for the first Whitbread: “I was 21 years of age and I had the opportunity to race around the world. It was just great! In contrast with Kriter helmed by Jack Grout, which only had the big names aboard who didn’t get on, there was a fantastic atmosphere on our boat and the unity and trust we felt are essential in a race like this.

“There were ten of us, with three people on watch at a time – one on deck, one on standby and one in the bunk. It was a mixed crew comprising the family of André Viant – a polytechnic graduate, company director and an incredible sailor – his daughters Françou and Sylvie, his son Jimmy and his son-in-law Michel Vanek, as well as young sailors like Loïc Caradec and me.

“Grand Louis was a comfortable schooner, but she was a sluggish tank. I recall cooking pancakes to kill time in the Indian Ocean. As it was the first race around the globe, everyone set sail with heavy, solid boats. We didn’t know quite what to expect.”

Today, despite running the CDK Technologies yard, which has built countless IMOCA yachts, including six Vendée Globe winners and the latest 11th Hour Racing Team, Philippe Facque has never sailed one of these boats.

“What’s amazing with these foilers is that they outperform the 60-foot ORMA trimarans from 30 years ago. These boats are fabulous, but with a crew of five in the Southern Ocean, it’s bound to be full-on and physically demanding,” Facque says.

“These carbon hulls are incredible echo chambers. At the same time though, racing has become so much more professional in the past 50 years and today’s sailors are meticulously prepared and even ‘tougher’ than we were.

“I sometimes wonder whether I’d enjoy a crewed round-the-world race on these extraordinary machines if I were their age today (he’s now 70). I think I would… They go three times faster, they certainly do less cooking aboard than we did, but they get to experience what is an exceptional, unique and quite rare adventure,” he concludes, laughing.