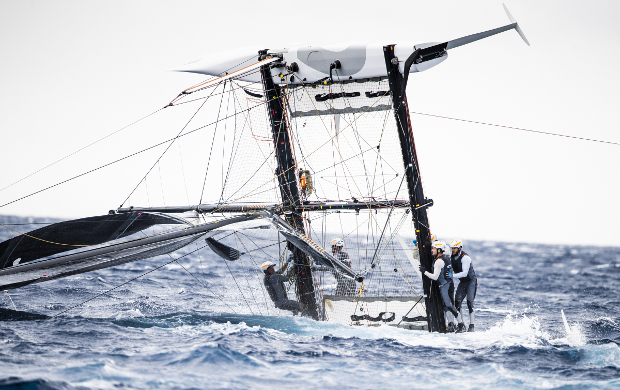 A dramatic opening day at the GC32 Villasimius Cup saw two races held before black clouds descended on the race course, causing the wind suddenly to build to 25+ knots from the southwest, kicking up a rough sea state. Deeming it unsafe for the flying catamarans and to avoid damage on this first day, PRO Bill O’Hara called it a day and sent the seven GC32s back into the Marina di Villasimius.

Considering how the day ended, conditions off Capo Carbonara and its protected marine area, began in a benign 5-6 knots. The opening round of the ANONIMO Speed Challenge was held in this, with Realteam going last and the only team to complete the reaching leg, down to the gybe mark, and back, in sufficient breeze to fly fully. Not surprisingly the Swiss team notched up the highest average speed.

Standing in for Realteam skipper/helm Jérôme Clerc this week is Arnaud Psarofaghis, on loan from Ernesto Bertarelli’s Alinghi team. In both today’s races, the champion Swiss helm coaxed perfect starts out of Realteam and was first at the reaching mark. Unfortunately in the opening race Realteam was unable to hold on to her advantage, allowing Ben Ainslie’s INEOS Team UK to pull into the lead. Then on the second upwind the left side paid handsomely causing NORAUTO powered by Team France to edge ahead and cruise home, Volvo Ocean Race winner Franck Cammas notching up his first GC32 Villasimius Cup race win.

“We gained a lot from the shift, but in fact every upwind leg was better on the left today,” admitted Cammas. “We are fast, but we didn’t sail well today: Our timing for the starts wasn’t good and our manoeuvres were also not good, but we finished well. Tomorrow we must sail better.”

With the wind already building, in the second race Realteam clung on to gain its first bullet. “We had a few problems on board, but we managed to keep the boat going fast,” said Psarofaghis. “The wind filled in from the left, so there was more shift and pressure there.”

Loic Forestier, who is skippering Realteam this week, said Psarofaghis was fitting in well – not so surprising given that they have known each other for more than 20 years. “It is very easy because he has a lot of experience and knows all the crew. With Arnaud we have found good timing and a good angle for starting.”

With conditions having deteriorated and showing no sign of improvement, racing was abandoned. Sadly this was not before Jason Carroll’s Argo capsized, just after rounding the top mark for the first time in race two. Neither crew nor boat were injured. Argo was quickly righted and ready, with ample time to spare, to compete in the next race – had it happened.

“We just got a little loaded up,” admitted Argo’s Anthony Kotoun. “It was a full-on stand-her-up–on-end as much as you can pitchpole! I hung on to the shroud and did a little high wire act, but we were fine. I could see everyone was okay. It may have looked scary, but the whole thing seemed pretty mundane.

“We have got a great support team that got right on it. Unfortunately we have got a little bit of practice at it now! The boat was ready to go for the next race – in fact we spent most of the time putting the reef in.”

Everyone agreed that the PRO’s call had been correct. As Franck Cammas put it: “We tried to do a downwind leg with the gennaker and one reef, but we did a hard nosedive which left me at the bow!”

Racing is set to continue tomorrow with a first warning signal scheduled for 1300 CEST.