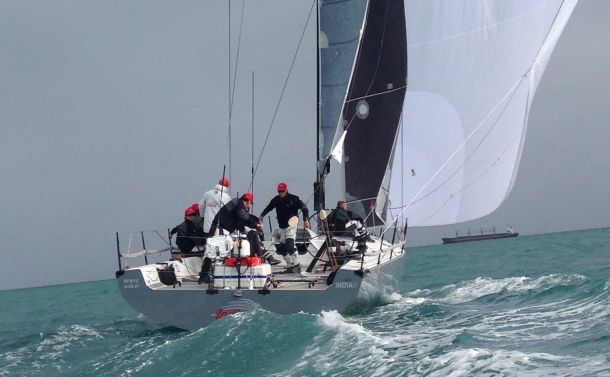 Finally the 2015 Wonderful Indonesia Fremantle to Bali Race and Rally got underway after two days of postponement with boats setting off to Bali, Indonesia at 10am this morning.

Indian, owned by Craig Carter and helmed by Paul Eldrid for the start, led the fleet off the line towards Rottnest with a clean spinnaker hoist whilst Garth Curran’s Walk on the Wild Side was close behind. Wasabi’s start wasn’t quite as tidy, experiencing a wineglass with its spinnaker in the first hoist of the race.

The boats quickly separated with Indian sailing angles to keep her asymmetric spinnaker full, whilst Audeamus took a much more direct route with her large symmetrical spinnaker.

Conditions were still bleak with drizzle attempting to dampen the spirits of the sailors, however, with their sights firmly set on a safe passage to Bali the sailors left with smiles on their faces,  happy to be underway after the twice postponed start caused by severe Perth storms over the past 48 hours.

Playground, skippered by Martin Webster, was in fact a bit too eager to get to Bali, breaking the start of the Rally, whilst in opposite circumstances Prime Factor was the last boat to leave the FSC pens and rushed to start within the start window of one hour, crossing the start line well behind the rest of the racing fleet.

To track the fleet on their progress to Bali follow the race via the Yellowbrick Trackers here: http://yb.tl/f2b2015