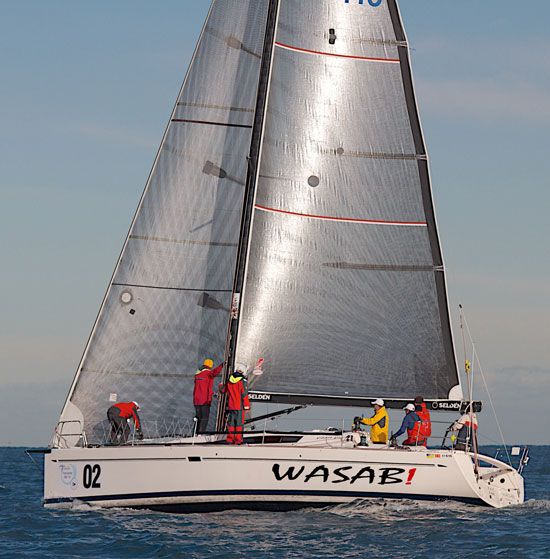 Spare a thought for Wasabi this morning.  The boat is languishing in Exmouth with a belly full of fresh water in the bilge, water that should be in the boat’s water tanks.  The source of the leak is not apparent yet, leaving skipper Paul Arns little alternative but to retire.“We had about four days’ worth of water left,” said sailing master Andrew Harry, “And an estimated five days of sailing to reach the island.”

A delivery crew is being organised to return Wasabi to Fremantle. The race crew will fly out from Exmouth today and most will then fly to Bali to join their colleagues for the presentation celebrations.

The retirement was particularly galling for the crew because the boat had a radio problem caused by a corroded wire, and had very little idea of how well they were doing until they reached Exmouth.

Meanwhile, Endorfin is now well on the way back to Fremantle, although her tracker still shows her in Geraldton Harbour.  Skipper Mike Giles estimates that the boat will dock in Fremantle at around five o’clock this evening. Most of the Endorfin crew are already on their way to Bali by air.

It’s great to see that the guys who have been forced to retire are still expressing their support for the event in this way, to ensure that the winners are congratulated in the presence of all of their peers and not just those who managed to complete the journey.

Indian continues to pull steadily away from Walk on the Wild Side as both yachts close on the island at around 10 knots, suggesting that there is still good pressure from the east. With just over 250 miles to go, a race record seems to be just beyond Indian’s grasp. It also seems a formality now that Wild Side will hang on to her lead on YAH handicap, a great tribute to Garth Curran, his crew and his veteran Inglis designed flyer.

We commented yesterday on the tactical battle between Audeamus and Sue Sea, placed third and fourth on both handicap systems at present, which is developing into one of the more intriguing aspects of the race.  Brian Todd has taken Sue Sea well west of the rhumb line while Lisa Chamberlain has opted to stay marginally to the east of it.  Although they are separated by a huge distance, the two yachts have very little between them in terms of distance to go and the final outcome will probably be decided by the infamous tidal movement near the island.

The leading rally yacht Playground is making similar speed to Audeamus and is positioned a little farther east.  Plus 16, Teelia Bell and Prime Factor are next in handicap positions, all moving up a spot with the retirement of Wasabi.

We mentioned yesterday that Odyssey of Fremantle had made a pit stop at Coral Bay, and have confirmed that Joanne was not booked in for a manicure but that with the assistance of an enthusiastic bunch of back packers, they loaded up with fresh fuel supplies at Maud’s Landing.

The Wonderful Indonesia Fremantle to Bali is a 1440 nautical mile ocean race which starts in the historic Port of Fremantle and finishes in exotic Bali.  Presented by Fremantle Sailing Club with its naming sponsor the Ministry of Tourism of the Republic of Indonesia the spectacular biennial event is one of Australia’s most exciting blue water yacht races