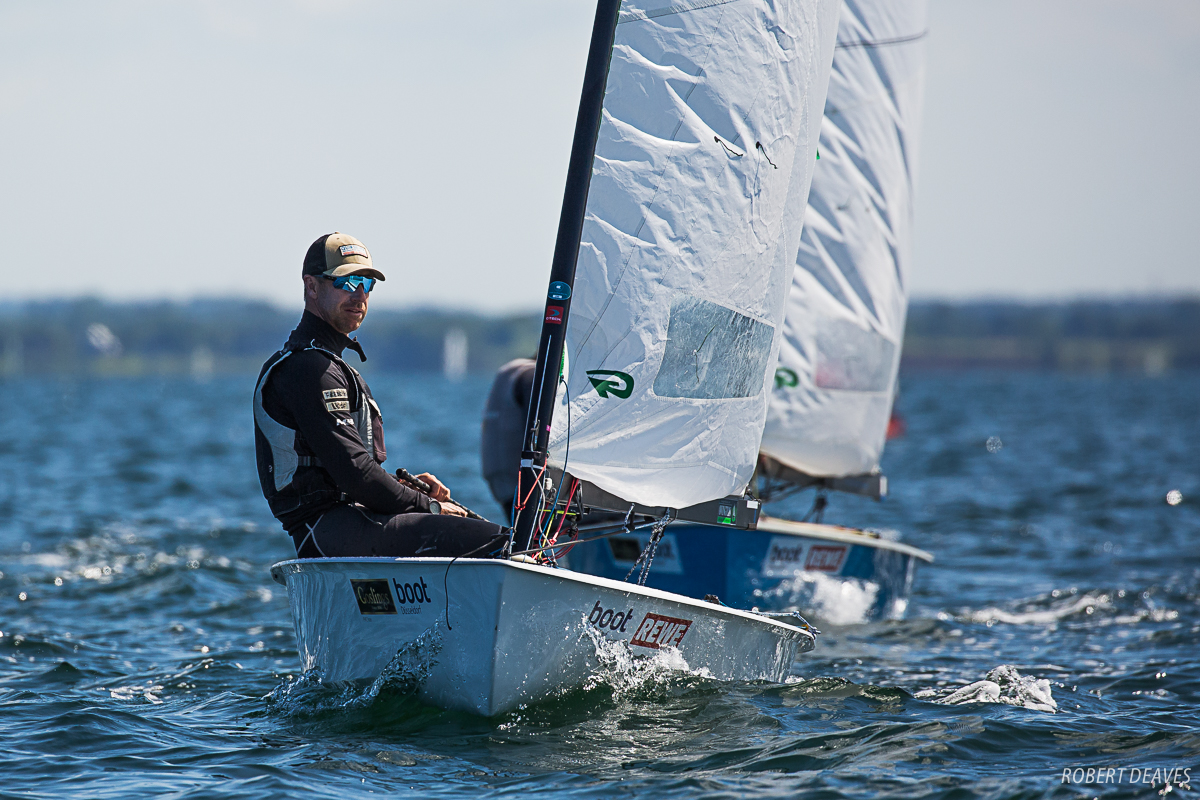 Defending champion, Fredrik Lööf, from Sweden, opened the 2019 OK Dinghy European Championship with a fifth and a race win to lead the 91 boat fleet after the opening day in Kiel, Germany. Race 1 winner, Jan Kurfeld, from Germany, is second with Greg Wilcox, from New Zealand in third. The championship is being held as part of the 125th Kieler Woche.

Two races were sailed late on Saturday afternoon with distinctly un-Kiel like conditions, with high temperatures, sunny skies, sparkling water, and light onshore winds. It was a huge upwind sail out to the start with the course set near the Kiel Lighthouse, and the fleet then enjoyed two very tricky races before a long sail home. The wind never really got past 4-6 knots, and was pretty shifty, though the left side was predominantly paying.

Race 1 began under black flag with four boats pulled out. The race really belonged to Marek Bernat, of Poland who led virtually all the way after getting a nice left shift to hold a good lead at the top mark from Hans Börjesson, of Sweden, and Gunter Arndt, of Germany. Many of the favourites were deep in the fleet and had some work to do to pull back.

Wilcox rounded around fifth and was up to second at the wing and briefly took the lead at the gate, but with Bernat again favouring the left, the Pole was back in the lead at the second top mark, this time from Wilcox and Oliver Gronholz, of Germany.

Bernat led down the run and through the gate, but on the final beat, Kurfeld pulled through the fleet to end up right behind Bernat, and then a few timely tacks near the top and he was through to claim victory in the last 50 metres. Bernat crossed a few boatlengths back in second with Arndt in third.

Anders Gerhardt-Hansen, from Denmark was fastest to the top mark in Race 2, rounding just ahead of former champion Bo Petersen, also from Denmark. Petersen rolled over Gerhardt-Hansen on the first reach only to receive a yellow flag from the jury and drop back. It was his second flag of the day, after collecting a black flag penalty in the first race.

Lööf took the lead next and led at every mark to win the race, while Wilcox moved up to second. They extended at the top of the second beat and took the pressure downwind to built a comfortable gap. Wilcox applied pressure on the final upwind to briefly pass Lööf, but Lööf took it back on the next cross to win. Petersen crossed in third.

In the evening a flag parade took place through the Kieler Woche village to the live stage, where the President of the Kieler Yacht Club, Karsten Krage, welcomed the fleet to Kiel and officially opened the event.

He said, “It is a great honour and pleasure to welcome you here in Kiel. This year we have about 4,000 sailors from 50 nations taking part in Kiel Week and every year we try to add a highlight to the standard programme of Kieler Woche.”

“This year the OK Dinghy European Championships is definitely the highlight. I must admit it’s also my personal highlight as the first boat I ever owned was an OK Dinghy.”

Following the opening, a huge buffet was served, which was very welcome after the long day afloat. The championship runs until Tuesday with 10 races scheduled. Three races are planned for Sunday, with an earlier start time of 11.00