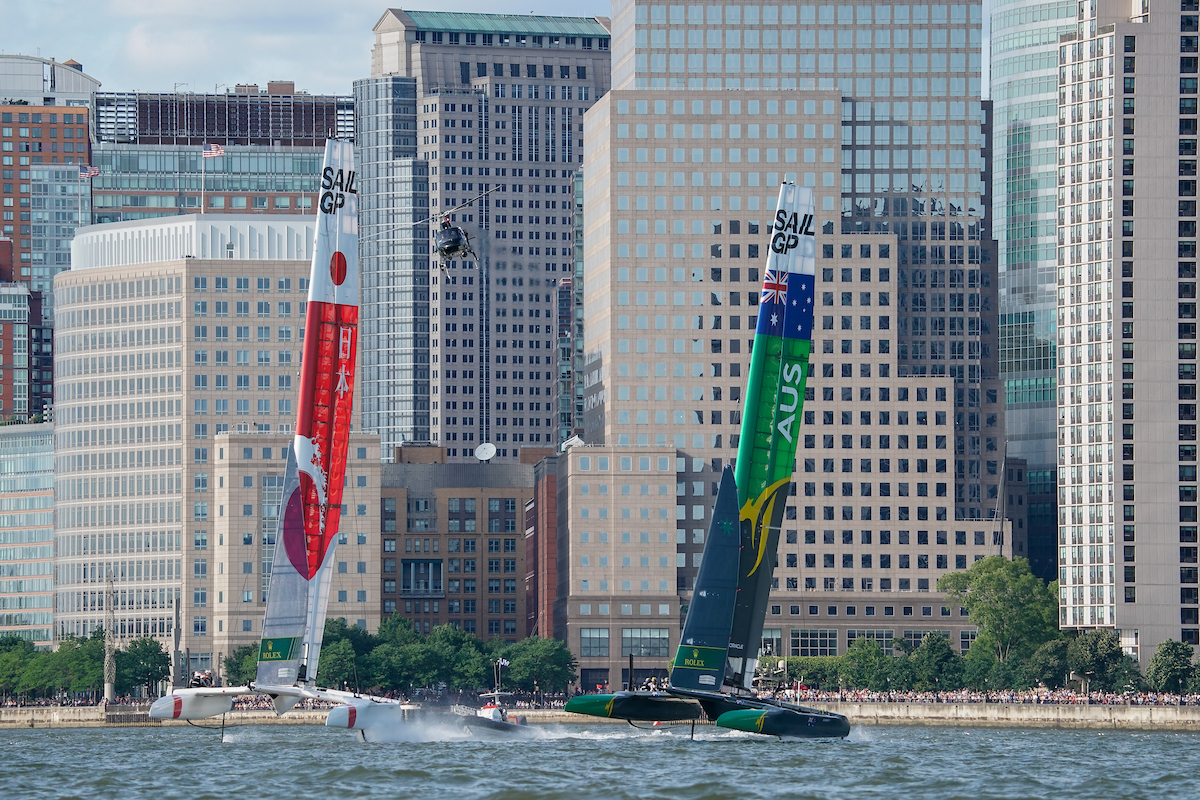 An intense final match race took place between the two notorious rivals on the Hudson River racecourse, which saw drama before the start as the high-powered F50s, capable of intense speeds, made contact. A penalty to Australia saw Japan eventually get the better of the season’s leaders and take the victory in New York.

“Nathan took what we felt was the unfavorable entry, so we managed to get across him and have an advantage in the pre-start, but we fouled him, so even though we won the start, we had to get behind him. From that point onwards we were just chasing him around. Then on the third leg, there was a period of no wind and he just disappeared, and that really was it — race over,” said Slingsby.

“Here we knew it would be a challenge and what I am really proud about is that our whole team focused every single step of the way,” said Outteridge. “I am relieved because we really needed a win, we deserved to win, and I am proud of everyone’s effort. The Aussies are, without a doubt, the team to beat, and I think now we are starting to even out the playing field and can’t wait until Cowes.”

New York’s urban landscape provided an extra challenge for the world-class athletes this week as they battled shifting breezes and varied wind speeds on a smaller, more challenging racecourse. Boat handling and maneuvering on the foils was significantly more of a factor than ever before as the boats flew around the Hudson at the fastest speeds yet seen on SailGP, with the Australia team hitting a top speed of 48.69 knots (nearly 60 mph). It was the superior adaptability of the Japanese team that won the event on the Hudson.

“It was tough conditions, but the Japan team was better. They’ve been better than us the last two days, and they deserve the win,” said Slingsby. “The way this sport has gone, and the way Nathan and my careers have gone has been amazing, and we’re so happy to be here racing each other; unfortunately, it’s on different teams, but it also makes it more fun.”

“The boys were pretty fired up to go racing today, and it showed,” said Kirby. “To win a race is awesome but we want to win events. But we’re happy to be on the podium, and it was awesome to see the crowd out there.”

Only one point separates Japan and Australia on the Season 1 leaderboard, but now four teams have proved they are capable of winning races, putting the pressure on for the next event in Cowes.

One team that will be looking forward to racing in Cowes is the Great Britain SailGP Team, which suffered a capsize on the Hudson that significantly damaged its wingsail. The British will be eager for redemption in front of their hometown crowd at the first European event of SailGP’s inaugural season.

“It’s been a disappointing weekend all in all for us – we learned a lot from our capsize yesterday, and I’m proud as a team of how we came back after that setback,” said helmsman Dylan Fletcher.

SailGP’s next stop is Cowes, UK, over the weekend of August 10-11, when the home of British sailing will be able to witness the intense racing and awe-inspiring speeds of the F50s.