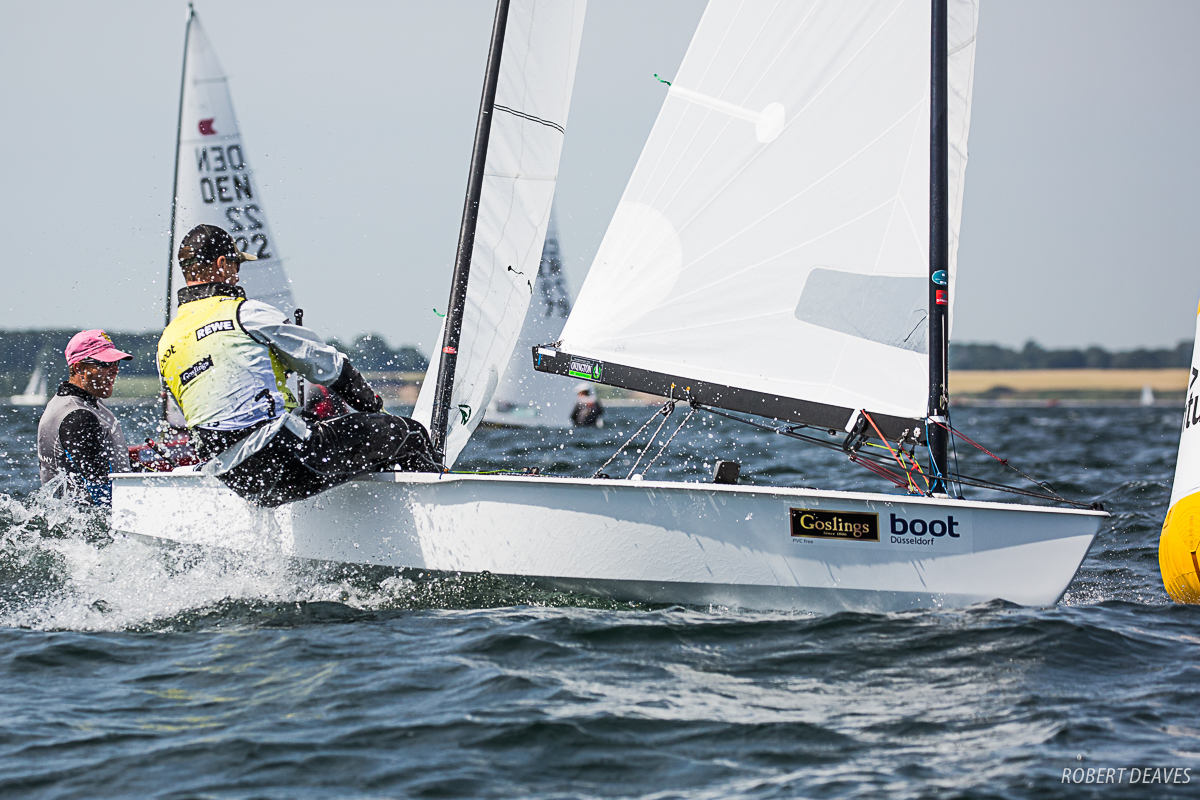 After three more races at the OK Dinghy European Championship at Kieler Woche, Fredrik Lööf, from Sweden, is now one race away from defending the title he first won last year. He didn’t have it all his own way though, only winning one race and coming under continuing pressure from Valerian Lebrun, from France who won the first race of the day.

In winds of 10-14 knots, Lebrun took charge of Race 6 early on to round ahead of Lars Johan Brodtkorb, from Norway and Hans Börjesson, from Sweden. Lebrun sailed away for a big win, to apply a little pressure on Lööf, who crossed in second. Stefan de Vries, from The Netherlands, put on the turbo on the final upwind to cross on third.

Lööf evened the score in the next race to win his fourth race of the week with Lebrun just behind in second. Luke Gower, Britain’s resident Kiwi, put on his race face to secure his best result of the week in third.

After a windy start to the morning the breeze was easing through the day, and again it was Lööf at the front in Race 8. However on the second upwind Hansson-Mild smacked the left corner and passed everyone to take an easy win from Lööf and Lebrun.

Lebrun explained his day. “It was another good day of sailing in Kiel. We thought it would be a bit windier than it was but we had a pretty windy first race and I won that and then it started to decrease for the last two races. Some gusts were coming from both sides, so I decided to stay conservative and stay in the middle, but boats were passing from both sides. So really tough, but still fun and with the waves downwind a lot of fun again.”

“I am a bit exhausted with two days of three races and pretty windy but it’s the last day tomorrow and two more races to go.”

“I just bought a Synergy hull one month ago and I have only trained in heavy weather, and mostly alone, so I had no idea if I was fast. Today I realised I was pretty fast upwind and downwind, so I am really happy with the boat and the Turtle sail was perfect for these conditions. So I am pretty happy with my gear.”

Hansson-Mild said, “It’s a fantastic event to be a part of, over 90 boats and so many good sailors. I am struggling though. I had a terrible first day, forgetting to sign in, so I had to carry another 10 points, so today was the day to either die or come back. But it’s tough racing. I am doing my best but it’s not as good as the top guys. I finished first in the last race so that’s good.”

Speaking about the recent growth in the class, he said “I think the fact that we get so many former Olympians and professional sailors adding to the class, that just makes the class more interesting and more attractive and the boats these days are just super fantastic with a super finish.”

“For Kiel Week it has been fantastic. Normally Kiel Week is famous for other things than the sun, so we are thankful that we are having it now. The sailing has been great as well with long courses and fine courses, and finishing on top today was great.”

Without really putting a foot wrong, Lööf is now one race away from defending his title. Lebrun and Kurfeld, both have letter scores already so must continue the good form to the end of the regatta to maintain their podium places, as there are a lot of good sailors just behind them waiting for their chances.

The championship concludes on Tuesday with two more races scheduled to complete the 10 race series.