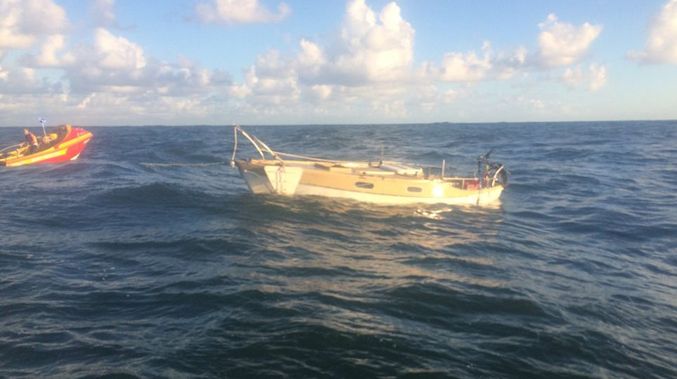 A man had a lucky escape as his yacht sunk on the Ballina bar on Thursday afternoon. Photo The Northern Star.

The Northern Star reports that a sailor is lucky to be alive after his 25ft yacht capsized while he was attempting to cross the Ballina bar in northern New South Wales at 3.30pm on April 5.

NSW Surf Life Saving duty officer Jimmy Keough told The Star that the vessel had lost its mast during the trip north from Forster to Brisbane.

The man was brought to shore by the jet boat just after 4pm.

He was treated by paramedics and taken to hospital after ingesting some water and was experiencing chest pain and shortness of breath.

Mr Keough attended and said the man was lucky to have been rescued safely.

“It was a coordinated, joint agency effort with everyone responding quickly which made this rescue a success,” he said.

“He is extremely lucky as the ocean conditions are expected to continue to deteriorate over the coming days.”

Because of the poor conditions, the yacht couldn't be towed across the bar to safety and sank while being brought back to Lighthouse Beach.