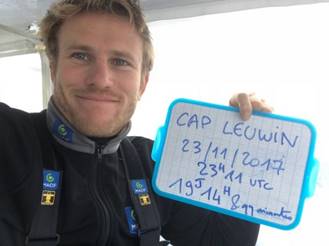 Less than eight days after rounding the Cape of Good Hope, François Gabart rounded Cape Leeuwin of Australia, the second of the three capes of his single-handed round the world, on Friday at 0:15 (French time – UTC+1), after 19 days, 14 hours and 10 minutes.

This is a new reference time for the MACIF trimaran, whose average speed since the start in Ouessant (Ushant) is 26.5 knots, since Sodebo, with Thomas Coville at the helm, took 1 day, 12 hours and 59 minutes longer, last year, to sail round the south-west of Australia.

Faced with difficult sea conditions as he approaches the end of the Indian Ocean, Gabart, who we spoke to on Friday morning, remained cautious when asked to comment on his time: “I can only be happy.

“If I’d been told I’d make this time before the start, I’d have signed up immediately, but, although at the Cape of Good Hope I had the time to see it coming. It was a real relief, this time – I’m focused on how to stay ahead of the weather front, to make it to the south and getting cracking on the small repair jobs that needing doing aboard. I don’t have much time to dwell on the time right now.”

On Saturday, MACIF will sail south of Tasmania, which marks the entrance to the Pacific Ocean.

For the skipper, this will be an opportunity to assess his Indian Ocean crossing: “Thomas had a tough time in the Indian Ocean, but sailed very fast. As a result, he made up the time on me, but despite my difficulties and my trajectories – I have covered a whole load more miles than the optimum route – I think that I have limited the damage.

“I’ve had a quite a hard time of it, and it was far from plain sailing, but I don’t see how the South Seas on a 30-metre multihull could ever be thought of as an easy ride.”

Positioned on a fairly northerly route (46 degrees Friday morning), Gabart is enjoying a “perfect” temperature, with 14 degrees on the thermometer. On the other hand, the sea conditions are very difficult, with the “boat moving constantly,” tossed in very unpredictable waves.

“The swell isn’t huge, 3-4 metres, but the distance between the troughs is short and it’s very rough. The boat is 30 metres long, all the same, which means that when a wave crashes over the bow, it tends to take her with it.

“In these conditions, it’s hard to maintain a good trajectory. I spend a lot of time at the autopilot bearing away and luffing up. Last night, I wasn’t getting it right; during the daytime, I manage to get a better feel of the roll and the angles for positioning the bow. I hope it’s going to calm down, because with a lot of swell and the wind easing up, it’s not easy to maintain a fast speed.”

When François Gabart crosses the longitude of Tasmania on Saturday, he will then enter the Pacific Ocean. His aim is to sail the boat further south to pick up the surfing conditions essential to making quick progress.

The weather situation is not yet clear: “I am going to run down into the weather front, then, I will be watching a small low-pressure area closely, coming down between and New Zealand. It doesn’t look very active.

“Following its development, a small area of calm could form, but it shouldn’t last long. After that there’s a relatively strong west wind, but unfortunately it really is from the west, which will force me to make tacks downwind. It won’t be a straight tack without manoeuvring.”

The second part of the Pacific Ocean is also looking complicated with quite a few areas of ice floes on the route.

“Although, up until now, I have had less ice than last year, it looks as though in the Pacific Ocean will be more in the end. For the moment, it doesn’t matter if we come in from the north, but if the ideal trajectory brings us in from the south, this could create problems. I hope the weather situation will be favourable,” says the MACIF trimaran skipper.

Tossed about on this last section of the Indian Ocean, the MACIF trimaran skipper is feeling a little less on form, which is understandable considering the weather conditions and high speeds these last few days.

“There’s no hiding it, I’m tired. I haven’t had much sleep in the last two or three days. With the battering the boat is taking, it’s hard to sleep,” Gabart says.

“Simple things can become very complicated, like managing to stay lying down or sitting down without being flung all over the place. It’s also quite difficult to eat. The living conditions are difficult. You fight for everything.”

His sleep time has gone down these last few days (between 2 hours 30 minutes and 4 hours per 24 hours), and yet the sailor will have to keep up his efforts, because he as “a few repair jobs” to carry out.

“I saw a few small items that are broken this morning, which is a slight worry: the J2’s furling system (round swivelling part at the bow, used to secure the J2 foresail from the bottom) is broken, there’s a minor leak… nothing really very serious from a structural point of view, but I will need to spend some of my energy on these jobs in the days to come.

“Even if she’s moving a lot, I try to get as many small repairs done inside before night falls. Weather permitting; I hope I will have a moment tomorrow to do a small composite topside. In principle, if I don’t use the J2 furler, there’s no emergency.”

But, as François Gabart said last week, if you don’t do a small job in time, it can become a problem, hence his desire to get the jobs done as soon as possible.

*The time shown by François Gabart on the photo differs by a few minutes from the time of his rounding Cape Leeuwin in this press release. The team onshore receives the geographic position of the boat every 5 minutes. On board, François Gabart has the information in real time.

Follow François Gabart’s record attempt on the MACIF trimaran on the tracker: http://bit.ly/MACIF-CARTO-TDM