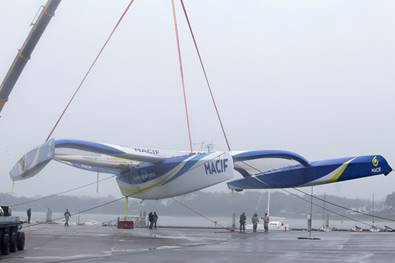 The MACIF trimaran returned to sea on Wednesday 8 March, after a 4-month winter refit. In addition to checking all the parts of the boat, it mainly involved improving ergonomics. The most visible area of work carried out by the technical team focused on completely protecting the cockpit.

Being able to sail safely in dry surroundings is essential for the first single-handed round the world, which François Gabart is preparing to sail towards the end of the year. “Last year, we partially closed-off the cockpit. We have taken this idea further this year, with a porthole and composite bulkhead system that provides the helmsman with better. The cockpit is now completely closed. I want to be able to pilot the boat without worrying about my own safety”, explains François, who is satisfied with the result. This new feature must now be tested at sea.

Sailing on the M24

Although François enjoyed taking a breather over the winter break, he nonetheless continued to train and to sail on board the M24; the team’s own customized version of a Diam 24, to test some of the developments they were envisaging for the MACIF trimaran. “The M24 is fairly similar in behaviour to the MACIF trimaran, only on a smaller scale. It’s a wonderful laboratory enabling us to test and perfect the technical developments of the trimaran of the future. Flying oceanic multihulls are still in their infancy, but it is interesting to have this platform to test features such as various appendage profiles. This comes on top of all the work we do in the design office with our modelling tools.”

The phrase: “For me, Thomas’s record is a huge source of inspiration and motivation”

Like all keen sailors, François Gabart closely followed the ample news this winter, particularly the performance of Thomas Coville, holder of the new single-handed round the world record in 49 days, 3 hours, 7 minutes and 38 seconds. This impressive time makes François Gabart’s challenge on the MACIF trimaran all the more exciting, and this is precisely what he enjoys. “This could have discouraged me, but, on the contrary, it has really boosted my motivation”.

As in the number of weather routings and simulations on screen the MACIF trimaran team carried out this winter. What is the result of this impressive body of data? “We have fairly accurate data showing how statistically difficult it will be to beat Thomas Coville’s record, but it remains possible”, says the skipper.

Programme: The Bridge and then the round the world

Although the single-handed round the world record attempt is the main goal this season, François Gabart and Macif are also preparing for The Bridge. This race with crew will see four maxi-trimarans (Actual, Idec Sport, MACIF and Sodebo) race alongside the giant Queen Mary 2 liner, between St. Nazaire and New York (start 25 June). “The line-up will be splendid. We will be racing against Idec, which has just sailed round the world in 41 days with crew, and Sodebo, which did it in 49 days single-handed – two boats that have left their hallmark on the history of sailing”, says François gleefully. For the MACIF skipper this Transat will be a new chance to further his knowledge of his 30 metre trimaran. “Right from the start, with Macif, I’ve had the following approach: each racing event serves as preparation for the next. The Bridge will prepare our round the world, which in turn will prepare the Route du Rhum 2018. Our dynamic is always to learn more and perform through progress. We do this to balance out the short-term and the long-term.”

25 June: Start of The Bridge (Race with crew between St Nazaire and New York)

21 October: Start of the standby period for the single-handed round the world record attempt