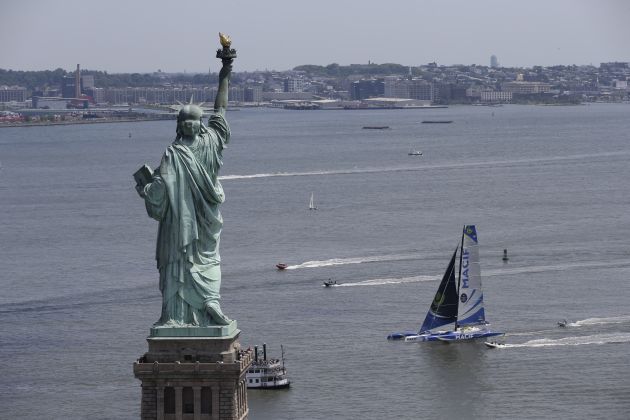 François Gabart and his crew were clearly in a hurry to see New York! In fact, it was a little ahead of schedule that the six “MACIF boys” took victory in The Bridge 2017 beneath Verrazzano Bridge on Monday at 13h31’20 local time, after 8 days 31 minutes and 20 seconds. Contacted just before tying his 30-metre trimaran to the dock in Manhattan, the skipper expressed his delight at being able to add another line to his track record with Macif.

How was the finish in New York for you?

François Gabart: “It was like last year’s; I can safely say that I know the routine now! However, each time, it slaps you in the face somehow as it’s so beautiful and awesome. I had an extraordinary time with my team. This finish at the foot of Manhattan is a real pleasure. It’s a beautiful image, which will remain etched on my memory for many years to come.”

Can you tell us how it feels to win a third transatlantic race in three years on the trimaran MACIF?

FG: “It’s a really proud moment coloured by a lot of happiness. We put this project together without necessarily expecting all this and we’ve managed to achieve some great things, whether it be in solo format or in crewed configuration; we’re delighted. There’s a sense of pride that I share with my whole team, as much in the preparation as the realisation of the race. I thoroughly enjoyed this race. Despite a less than simple course, despite lots of upwind sailing, there were some thrilling times; the minute you put a bit of pressure on the helm, you power up at some extraordinary speeds.”

How much did the boat play a part in this success?

FG: “You can’t single out the boat from the crew, partly because the boat was made by part of the crew (Antoine Gautier and Guillaume Combescure worked on the design and construction), and partly because in racing, we are one and the same. You need a symbiosis between the boat and the crew. We have a fantastic boat, we also have a great crew, and all that gelled together. On top of that, in reference to the trimaran MACIF, I’m delighted with her performance. It’s the first time we’ve sailed against IDEC Sport and it’s been a year since we sailed against Sodebo, so it’s always interesting to see where you’re at in relation to one another. The boat’s performance upwind is very good. At times, we were almost taken by surprise at going so fast! That proves that all the work carried out on the appendages, the aerodynamics, the foils and the boat’s capability in flight mode, have borne fruit.”

The objective of The Bridge was also to prepare for your solo round the world record attempt at the end of the year. Have you learned a lot with this in mind?

FG: “Yes, of course. Listening to the boat from the chart table and to feel her power up, enabled me to realise that I still had some room for manoeuvre: if I manage to grind a little faster, that can only be a good thing. The boat still has some fire in her belly and that gives me some food for thought on what direction to take. I saw that there were things I don’t yet know how to do singlehanded, but I am capable of getting a little closer to my goal. The record can be beaten, even if that’s not the only parameter that comes into play. Aside from that, I didn’t have the conditions of a round the world so I’ll have to get back out on the water and do some downwind sailing.”

You had a fair few ridges of high pressure and transition zones to negotiate with what weren’t always reliable forecasts and you were embroiled in a fine duel with IDEC. Was this race stressful for you in terms of the navigation?

FG: “It was different from what I’ve experienced thus far. When you’re singlehanded, clearly you have a bit on aboard the boat, so you make the strategy as simple as possible: you give yourself 15 minutes to do the nav, you decide on your course and you head off to do the trimming. Here, given that there was constantly someone at the helm and trimming, I was able to question myself over and over each time. I spent a huge amount of time at the chart table, more than I’d have thought, weighing up all the possible scenarios, and there were a lot given we had so many transitions and changes of tack. Added to that, when you’re leading, you have more to lose than your mates behind. You juggle a great deal with the perfect trajectory for your boat and that which would enable you to position yourself between the finish and the others. It’s not an easy game to play and requires you to react quickly. There were brief moments where I surprisingly tense about the situation, which rarely happens when I’m sailing singlehanded, but ultimately it was a real pleasure: I love the weather and the strategy aspect.”

What did you think of your crew?

FG: “They were all delighted to have had this experience. I can see a lot of smiles around me. That too was one of my objectives for this race: that everyone has fun getting the boat making headway. We had a ball doing that together. Everyone came into this with a different story or experience; some have sailed multihulls for a very long time and have already made several Atlantic crossings already, while for others it was their first time. Ultimately, we all did a great job and had fun doing it and I’m delighted to have pulled all that off so well. In sport and in general, performance and efficiency often come about as a result of having fun.”