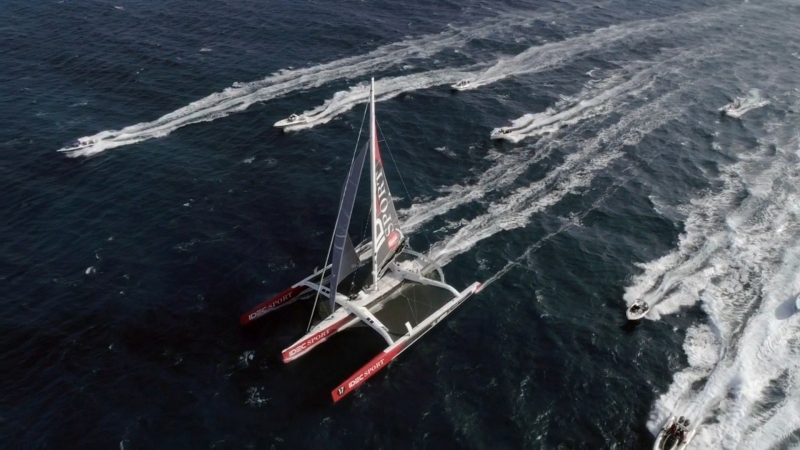 Francis Joyon has just beaten his own record, set 10 years ago in this stretch of the Route to the Indies referred to as the Mauritius Route – and he made it all look so easy – 19 days, 18 hours, 14 minutes and 45 seconds, or an improvement of 6 days and 10 hours compared to 10 years ago.

The Mauritius Route started from Port Louis in Brittany, with part of the round the world route that Joyon knows so well, having sailed it many times both alone and with a crew. The route then took him up the Indian Ocean with all its difficulties to another Port Louis, this one being the capital of Mauritius.

This performance pleased the skipper, who was happy to arrive with his IDEC SPORT in perfect condition. He was delighted with the route taken as this will allow him to respect the demanding schedule of the Asian Tour, which will see him sail on other magical routes in the coming months.

“For this record, I had two things weighing on my mind,” the winner of the last Route du Rhum and the holder of the Jules Verne trophy said at the finish.

“There was the pressure of getting a good result, as usual when you are racing against the clock. I didn’t have the pressure on me from rivals like I did in the Route du Rhum, but I needed to keep up to schedule for what lies ahead in the Asian Tour, which will take us to Vietnam and then China.

“I didn’t want to mess that up by arriving here behind schedule.”

This simple statement made with his usual modesty hides Francis’s insatiable appetite for racing against the clock and dealing with all the elements.

At the start on 19th October, this record was far from being a certainty: “Our weather opportunity was far from ideal,” he said. “As was later confirmed, there was nothing really interesting coming up in the next few days or weeks. We needed to get going in order to stick to the schedule for the Asian sailing program.”

It took IDEC SPORT just over 7 days and 2 hours to get to the Equator. An ‘average sort of time’, according to the skipper, considering the times he achieved over the past few years sailing solo or with a crew. But it already meant that he was more than a day ahead of the pace he set for the record back in 2009.

The St Helena high stretched right out to the coast of Brazil and was a huge challenge, but one that Francis was able to deal with. The south-easterly trade winds propelled IDEC SPORT a long way west on a long detour of the calms blocking the path in the middle of the South Atlantic.

IDEC SPORT headed towards the south-west a long way from the direct route, and lost some time in so doing. On the eleventh day of racing, he was a few miles behind the pace (up to 27) set by the second IDEC boat, which was able to trace a decent arc across the South Atlantic in 2009.

That was when the extraordinary happened in this adventure. With the help of his onshore router, Christian Dumard, Joyon noticed that a powerful low pressure system was developing off the coast of Uruguay. It would allow him to get back up with the speeds achieved with a crew during his successful Jules Verne Trophy attempt in 2017.

“I set off at the front of the low, which was moving quickly eastwards. Christian and I thought it would quickly drop us off as moving so fast and that I would have to wait for many long hours before a second system appeared; which also looked good.”

However, as the hours passed, I managed to stick on the northern edge with its strong north-westerly air stream and IDEC SPORT behaved remarkably again, clocking up days in excess of 600 miles, managing to convince the skipper that there was the possibility of sticking with that system all the way.

“This meant a gain of two days by the Cape of Good Hope,” Joyon explained, “So I hung on in there.” It is hard to imagine the effort it took to achieve this during the record. “As forecast, the low passed him by,” added Christian Dumard admiring this feat.

“Francis found himself in strong and variable winds, in excess of thirty knots and more importantly in heavy seas whipped up by the low. But he managed to stick with it adjusting the angle of the wind to the boat and spending time at the helm to position his giant trimaran on the crest of the enormous waves in the Southern Ocean.

“It is rare that we are able to take advantage of a weather system for so long,” said Francis, who was clearly delighted. “We managed to do that with the crew of IDEC SPORT in the Jules Verne Trophy.” However, it must have taken a huge effort.

Joyon admits he suffered seeing his boat suffer. “She jumped from wave to wave, making noises I had never heard before. The night before the Cape of Good Hope was the worst with a thirty foot swell. I was tired, but had to keep going. That was when the record was achieved.”

However, he states that at no point did he think he had gone too far, as happened last year in the Route du Rhum: “I always kept a small amount back. I never pushed the boat all the way. I needed to look after her for what lies ahead and I managed to do that.

“I’m pleased with the route I took and how the weather systems slotted into place. It was a long journey, but in the terms of the weather, it wasn’t bad. When I finished this morning, I caught sight of land for the first time since I set off. There was incredible light, the turquoise waters and the islands…” Francis was clearly in his element.