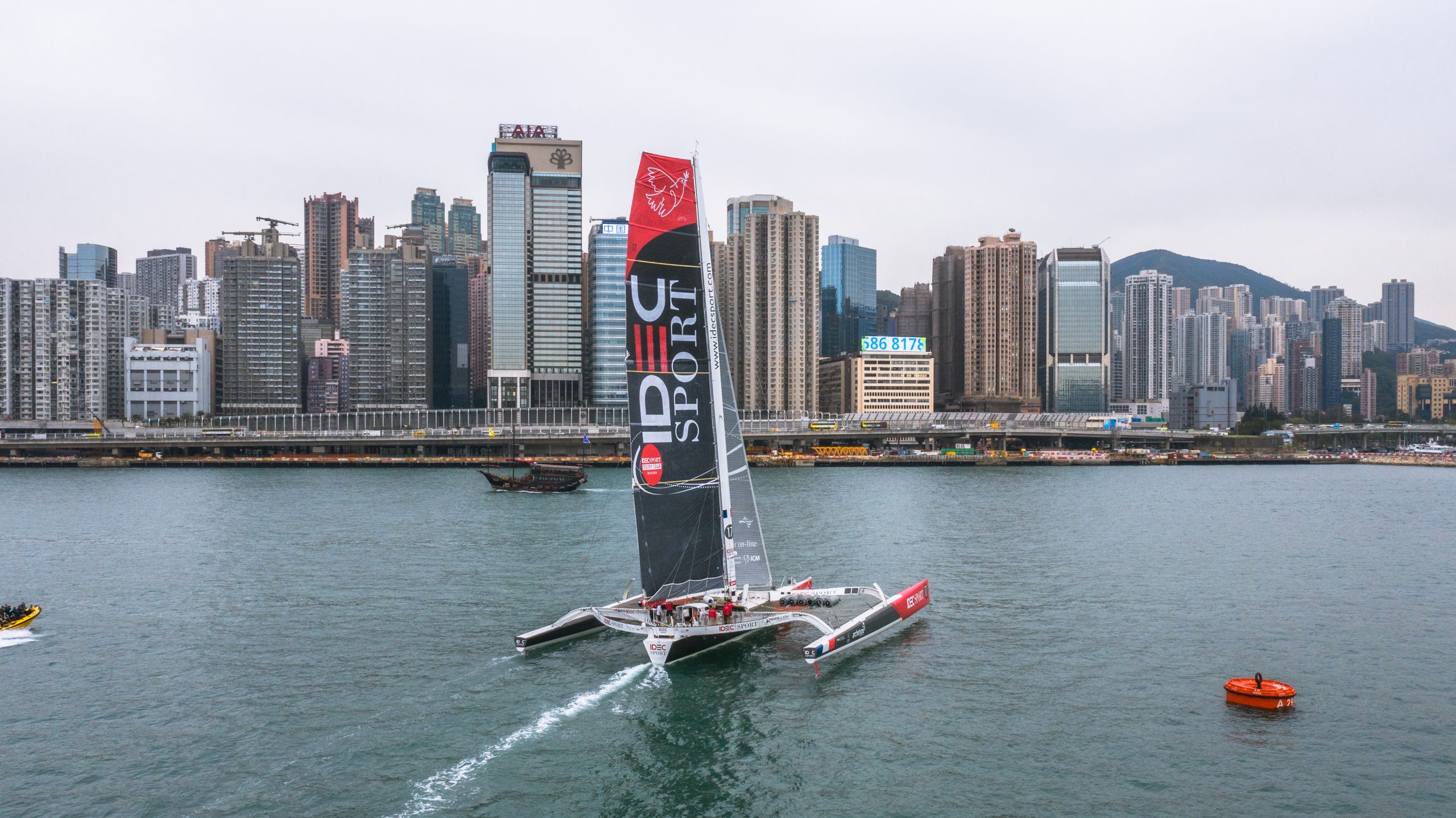 Francis has come to a decision. Between an option on the short route close to the coast of Africa, which would be slow, or a very long detour extending his route, he has decided to go west around the Doldrums that have stretched right out. IDEC SPORT is therefore taking advantage of a gentle trade wind via the northern face of the St. Helena high to enjoy some smooth sailing downwind, even if that means lots of gybes at ninety degrees to the direct route. His lead over Giovanni Soldini’s record has been going up and down between a day and a day and a half. Francis, Bertrand (Delesne), Christophe (Houdet), Antoine (Blouet) and Corentin (Joyon) are not at all worried. They still hope to finish in London after 31 days of sailing. Just as a reminder, Maserati’s set the record with a time of 36 days, 3 hours and 37 minutes.

“This evening, we hope to catch a glimpse of a cone-shaped island, which looks a bit like Napoleon’s hat.” Joyon’s little joke illustrates the serious yet relaxed atmosphere aboard the IDEC SPORT maxi trimaran after eighteen days of racing. Each of the crew is enjoying the voyage and making the most of the fine sailing conditions down at these latitudes in the South Atlantic. “The sea is calm and the swell going in the same direction as the wind,” explained Joyon. “We are sailing smoothly without putting any pressure on the boat. What a huge difference after the chaotic Indian Ocean. The trade wind is not very strong, but it is allowing us to make decent headway. Over the past 48 hours, the main thing has been to stay in the corridor of wind on the edge of the centre of the St. Helena high. We are calculating the precise moment when we need to gybe to ensure we keep the best wind angle possible. Life has been a bit repetitive since the Cape of Good Hope, but we are remaining focused and that means we have been able to sail faster than shown on our route planner.”

Getting around the Doldrums via the west

This race strategy involving rounding via the west the Inter-tropical Convergence Zone, which early this week stretched right out, has led the maxi-trimaran towards a curious feature in the South Atlantic, the island of St. Helena, a place that Britain and France have known all about since the famous Emperor originally from Corsica stayed there after 1815 and until the end of his life six years later. For Joyon and his men who are all very interested in history, it also means the possibility of catching sight of some land and greenery this evening before dusk, as they will be approaching quite close to the volcanic island with its 800m high peak. Napoleon is said to have hated the absence of sunshine on the island. This feeling is shared by the crew of IDEC SPORT, who fully understand what he meant. “It is hot and sailing at more than 25 knots is pleasant,” declared Francis, “But we haven’t seen any sunshine since the Indian Ocean. There is a lot of low cloud and it is very dull.” This detail about the weather is not unimportant. IDEC SPORT deliberately set off with very little diesel for the engine, which is used to power the instruments aboard the boat, and now there is very little left. “We are just using our wind turbines and our solar panels to generate energy. The absence of sunshine may in the long run be a handicap. So today, we are setting up our second wind turbine,” concluded Francis.

“This is really a great trip, a fantastic voyage. We have been able to see the vastness of the oceans and it is hard to imagine what it must have been like aboard the sailing vessels in past centuries. We don’t get to sail much in this region and we hope to see St. Helena this evening. It is a rare opportunity for a sailor. We are going around the St. Helena high in the opposite direction to that usually sailed by round the world yachtsmen, as we are going via the north. Francis refused to follow Soldini’s option along the coast of Africa, which would have been too slow and unpredictable. So we are heading for Natal in Brazil. (Laughs). We have a good thousand miles to sail in this direction, before turning around to the north. We’re sailing along smoothly. During the day it is hot and at night it is dark. The boat is not suffering. We have been going around her regularly, as since leaving Port Louis in Brittany, she has clocked up more than 20,000 miles. Today’s big news is that we are opening another bag of supplies. We will be able to eat something different and improve on our diet of rice and noodles.”