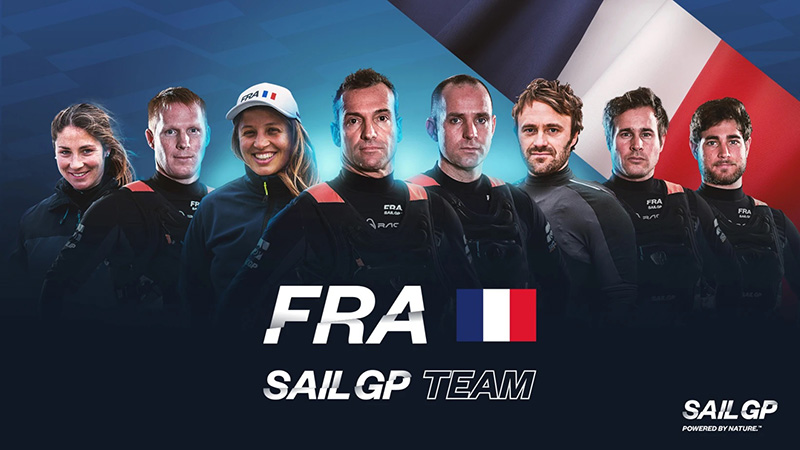 The France SailGP Team announced its line up that will compete in the second season of SailGP, which will take part in multiple nations, including one event in Bermuda this month.

The SailGP website said, “With less than 20 days until the Bermuda Sail Grand Prix presented by Hamilton Princess – that will herald the start of SailGP Season 2 on 24-25 April – the French team set a course for Bermuda a few days ago for three weeks’ training aboard the F50.

“Eager to rank among the top teams on the flying catamarans and earn a place on the podium, the French team helmed by Billy Besson and managed by Bruno Dubois is determined to build on the experience already acquired whilst integrating some new elements to inspire a fresh approach for the second season of the global championship.

France SailGP Team helm Billy Besson said:: “Since SailGP Season 2 was postponed due to COVID-19, we’ve continued to race on other foiling boats – such as the WASZP and Easy to Fly –so we can keep a competitive edge and hone the team’s skills.

“We finally made it to Bermuda yesterday and we’re really keen to climb back on board the flying F50 racing machines. The line-up this season is incredible with some eight national teams now, bringing the number of Olympic gold medalist helms to four in the league together with the latest double America’s Cup champion! It’s truly remarkable to be able to sail at such a high level. We’re going to have to work really hard over the coming weeks to bring ourselves up to standard on the F50, especially with the new wing, as well as developing our automatic reflexes aboard in English. I’m also excited that we will be able to introduce our female athletes for the first time to the F50 who will be joining us in mid-April.” 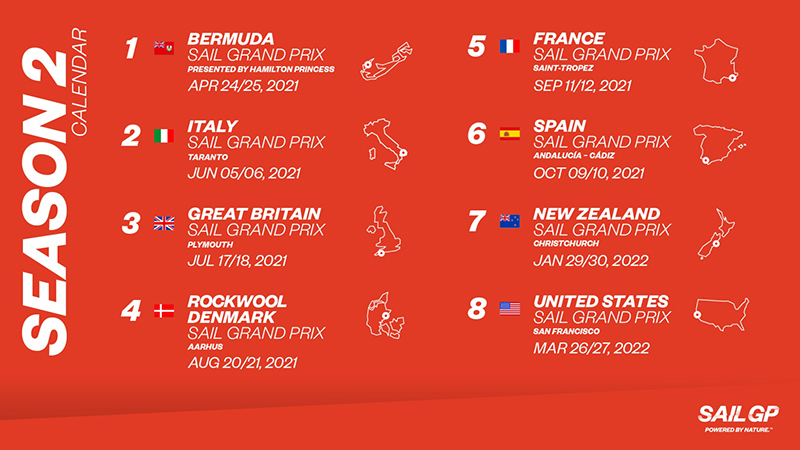 “The idea is to try and give ourselves a second wind and with it renewed energy to forge ahead and satisfy some clear performance objectives. However, we’re keen to avoid turning everything upside down too!” explains Besson.

“In this way, British sailor Leigh McMillan is taking up the post of wing trimmer. After a solid campaign aboard the British challenger for the 36th America’s Cup, where he took on the role of flight controller, this year he’ll be taking on a fresh challenge by joining the French team. McMillan will have to get to grips with handling and trimming the new adjustable wing. A new innovation for Season 2, this modular wing can range from 18 metres to 24 metres high to enable racing to take place in a wider range of sailing conditions and enabling the F50 to post even faster speeds.

McMillan said: “It’s a real pleasure to join the French team. I know some of the team, having sailed against them a few years ago, so we’re already very familiar with one another. I hope to bring my extensive experience to the table for the benefit of the team. Through the Cup teams I have worked with, I’m used to working on the performance of boats, so I hope to be able to get the most out of the F50 There are some top-flight teams in the championship, but I like to be an outsider and prove to others that they’re wrong, so I hope we’ll be able to pull that off. SailGP is a fantastic league and I think that the races will be very closely fought. I’m really looking forward to getting back into the competition. I’m also proud to be defending the blue, white and red flag! Fortunately, I’m well versed in defending these colors!”

“Multihull expert François Morvan will once again take up the demanding and tricky role of flight controller this season. He’ll be able to benefit from McMillan’s experience to polish up his skills.

“François has been with us since the start of SailGP. He’s managed to bring his skill set and expertise to the fore despite the short amount of time out on the water on this boat. I’m convinced that pooling experience with Leigh will be a real bonus for his post”, explains Besson.

Besson said: “He’s enjoyed a stellar career and he’s someone who has a great many strings to his bow: he’s accustomed to the Anglo-Saxon environment and he’s familiar with the boat’s technical aspects and data analysis.”

“The team will boast some highly experienced sailors in the form of Matthieu Vandame, Olivier Herledant and Timothé Lapauw, mainstays of the French clan.

“These posts are very demanding. You have to be on your game physically and mentally and be prepared to give it your all.” says Besson.

“Following on from Hélène Noesmoen, windsurfing foil world champion, 49erFX sailor Amélie Riou has also joined the French team. In addition to her Olympic dream, getting the chance to discover and be a part of a professional league like SailGP is a massive opportunity for Amélie. Naturally, both female athletes will get an introduction to the various posts aboard the F50 during practice, be at the heart of the action, tracking the races aboard the teams’ support boats, exploring the various professions on land or discovering the technology and communication which is always synonymous with a top-ranking professional sport.

Riou said: “To my mind, SailGP represents the global elite with all the best international athletes. It also represents innovation, which has great appeal, whether it be in terms of speed, data or sustainable development, with a constant eye on performance. I hope to be able to bring my good humor to the team, together with my willingness to always see things through to the end.”

France SailGP Team manager Dubois said: “Our sports team is optimized for the coming season. The hard core remains the same with athletes who understand what’s expected of them, but we have also integrated some new skill sets, particularly in the key post of wing trimmer. Briton Leigh McMillan, one of the UK’s most talented multihull sailors, will take up this post and will also be able to share his experience as a flight controller. With regards the shore crew, there has been a shake-up within SailGP so each team now comprises three members with a handle on five different skill sets. We’ve had to hunt down some highly qualified individuals to be able to cover these five posts. Added to that, we’re going to welcome two female athletes within our team, who will get the chance to discover the global championship. Since the season was postponed, we’ve remained active on a sporting, commercial and communication basis, with part of the communications and operations team still on hand. Our objectives are clear: to be ready to go and be competitive for the first event and, together with the help of our (soon to be announced) partners, to contribute to making sailing more popular among sports fans the world over, with a raison d’être that goes far beyond sport with the Race for the Future program.”

Composition of the France SailGP Team for Season 2:

This article first appeared in Bernews.com