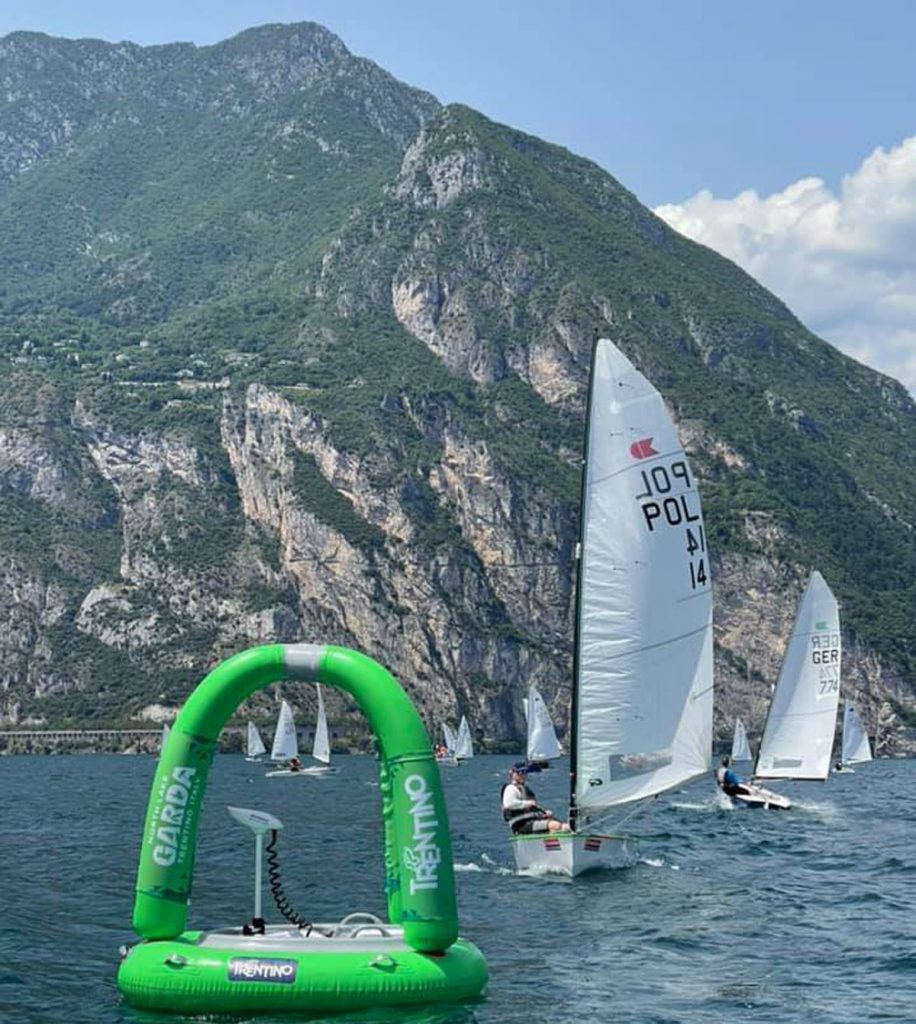 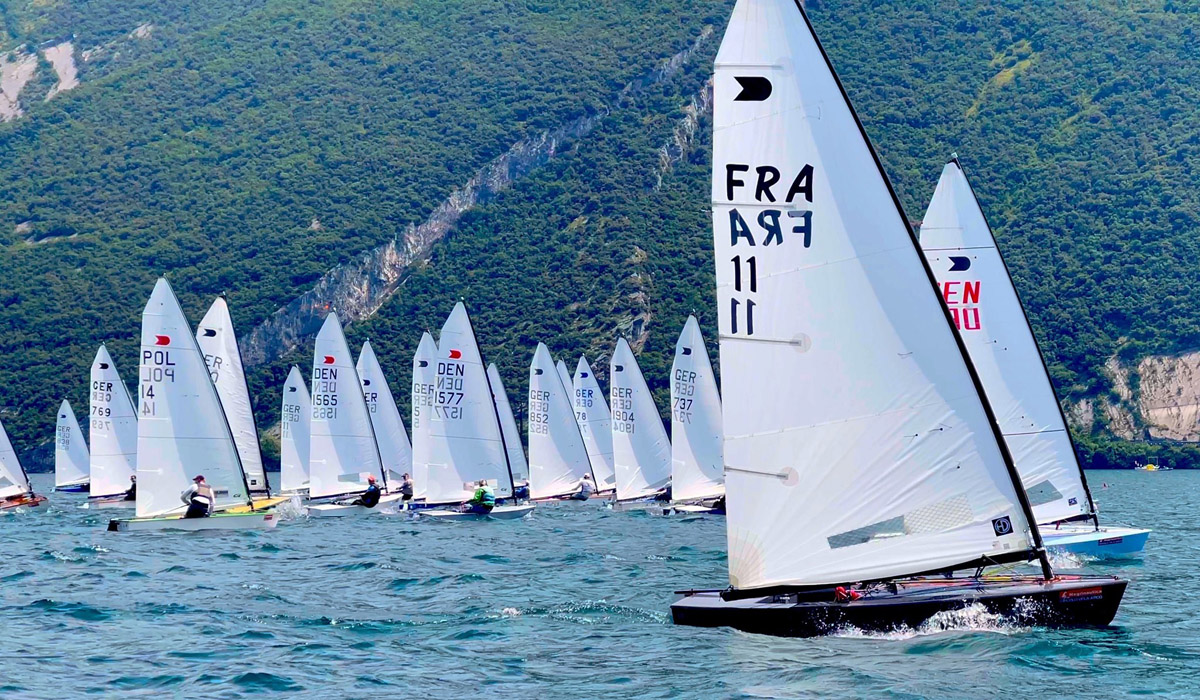 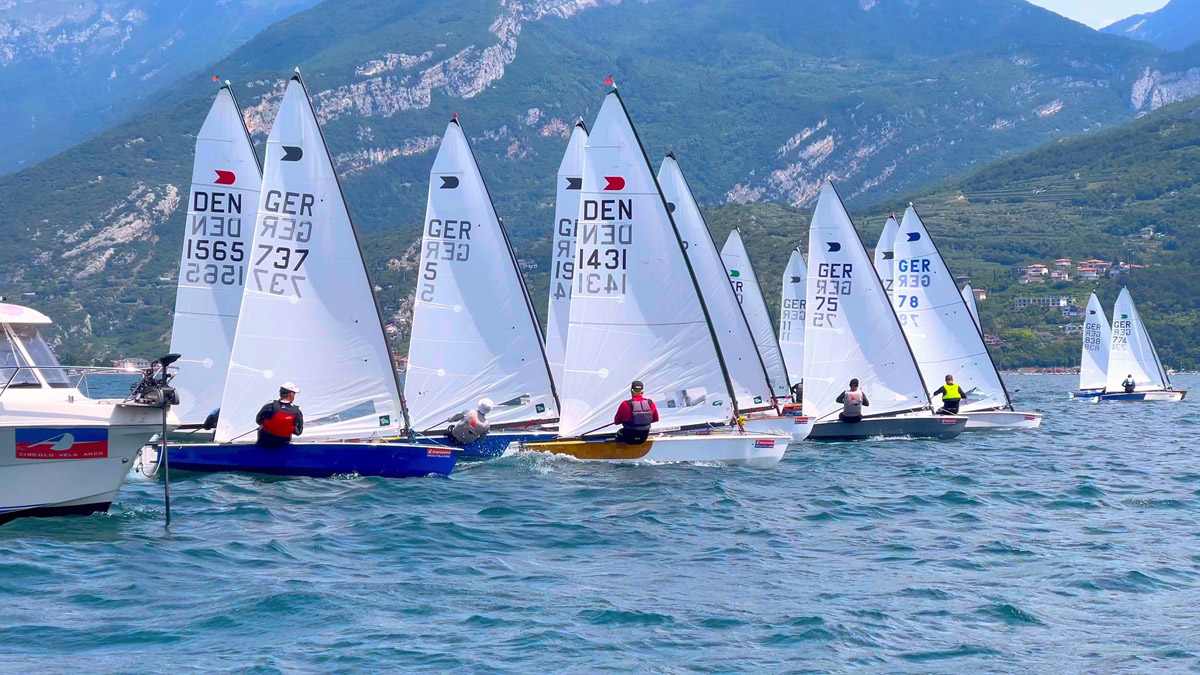 Lake Garda, Italy: Monday should have marked the start of the 2021 OK Dinghy World Championship, but instead a smaller regatta took place in its place, after 45 percent of the OK Dinghy members voted against holding the worlds.

Instead the OK Dinghy association helped organised an international regatta that has attracted 34 boats from across Europe. It’s a long way short of the 120-150 Europeans expected for the World Championship, but for those that made the effort, boy, do they love sailing on Garda.

The conditions for the first day were not exactly as expected. The wind was in the SSE, down to 8-10 knots at times and up to 15-20 knots in the gusts. Valérian Lebrun, from France, leads from Denmark’s Bo Petersen and Soenke Behrens, from Germany, after they each won a race.

The first start got away cleanly. Behrens said, “The right end was favoured and the best option was going to the left side, waiting for the shift and make the whole way up to the first mark.”

He rounded first from Malte Pedersen, from Denmark, and Greg Wilcox, from New Zealand, in second and third.

“I increased my lead on the runs and I had a really good second beat and finished first with a big lead.”

In Race 2, most of the fleet went to the left as far as possible. This time Lebrun and Petersen led the fleet. Petersen kept more to the middle and the left side was not as much favoured as expected.

Behrens said, “I was third followed by the other French guy [Yann Vilein]. Valérian seems to be the quickest upwind. The beats were shiftier, as expected and the wind was never as consistent as supposed for Garda. On the run Bo risked to much with the centreboard up as far as possible and capsized in a puff. But he was far enough in front to finish second.”

Valérian took the gun with Pawel Pawlaczyk, from Poland, third.

The last race started in less wind but still hiking conditions, though it was getting unstable and the left wasn’t favoured as in the other races. Petersen took the gun with Lebrun second and Johansen third.

Lebrun, who placed second at the 2019 European Championship, had the best day with a 2,1,2, but double European Champion, Petersen is just one point behind with a 3,2,1. Behrens took a fifth in the final race to sit in third overnight.

With the forecast for a big change overnight, bringing rain and storms, an earlier start time has been set for 0800 on Tuesday.