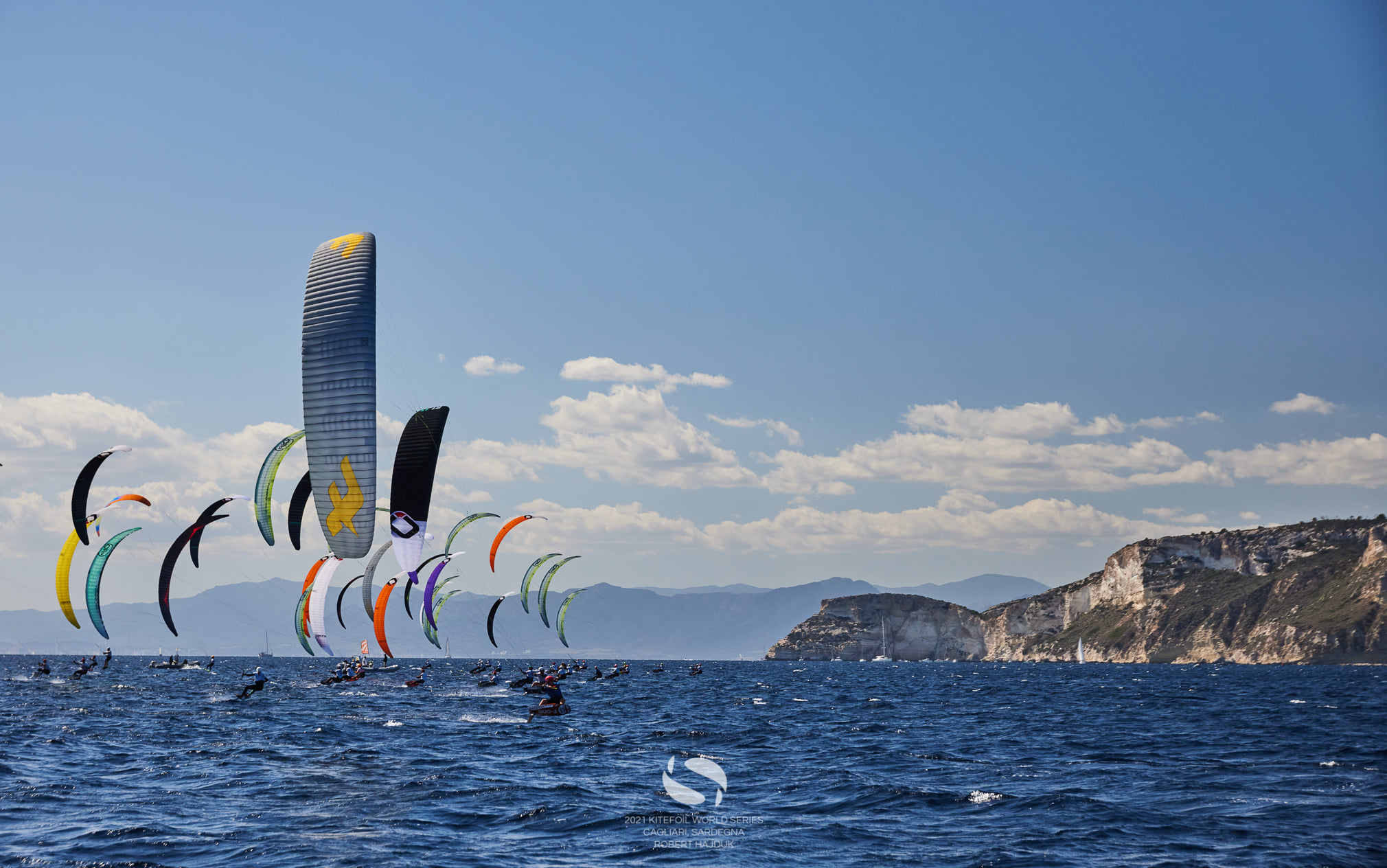 Frenchman Axel Mazella clinched victory at the third stop of the KiteFoil World Series in tricky offshore breezes that faded towards the close of the regatta’s dramatic final fourth day in Cagliari, Sardinia.

The faltering breeze that dropped to 6-8kts in the last race, left Mazella swimming when his kite collapsed after not managing to clear the top mark, despite pumping his foil furiously. Though he was able to recover and finish down the order.

But by then Mazella had already carved out an insurmountable lead with clinical performances in the previous 16 races on the Gulf of Angels track, off Cagliari’s Poetto Beach. He had fought off testing challenges from countryman Théo de Ramecourt, Britain’s Connor Bainbridge and Russia’s Denis Taradin, who finished just behind Mazella on the leaderboard.

Mazella’s win earned him a share of the €25,000 purse and cements his overall lead in the tour following his triumph at the second act last month in Traunsee, Austria. It keeps him firmly in the hunt for a coveted third International Kiteboarding Association (IKA) KiteFoil World Championship title.

“I’m happy about winning this event, for sure,” said Mazella. “I’m pleased about my performance, too. But I know I have some things to work on again after this. Because of the shifty winds I didn’t make good decisions. It was hard. Winning takes me a step closer to the title, and this is the one where I earned big points in that quest.”

His compatriot De Ramecourt advanced one place in the standings on the final day, climbing to second overall. The Frenchman ended the four-day regatta with a strong finish, in which he claimed three bullets and two thirds in the closing seven races.

The competition, in its fourth edition in Cagliari, was marked by diverse conditions that varied from 33 knots offshore Mistral winds, to lighter, shifty onshore breezes, that saw De Ramecourt become more assured and quicker after a mixed opening to his campaign.

“I’m really happy because I eventually found my rhythm, especially in the last two days,” said De Ramecourt. On the final day I had one of my best wins, but I also had some really bad races earlier. So, I’m really happy with my performance and mindset.”

De Ramecourt’s profit came at the expense of the Briton, Bainbridge, who took the third podium step after dropping one place on the last day. Bainbridge had a rollercoaster ride that began with the overall lead in the punchy conditions of day one, moving up and down the order.

“I’m glad that on the closing day I’m still on the podium,” said Bainbridge. “I felt I was going pretty fast and pushing Axel Mazella. But I felt the last day was a bit of pot luck with the breeze. There was no real predicting of what was going to come.”

The 16-year-old Italian Riccardo Pianosi did better than most, reading the shifts well. Pianosi, who will represent his home country at the World Sailing Youth Worlds in Oman in December, sped past the downed Mazella in the final race, taking third place and finishing sixth overall, earning him the U19 Youth crown.

“I’m so happy with my result,” said Pianosi. “It’s a bit of a surprise, but a good surprise. Racing with this level of guys, the best in the world, is difficult. I just try to do my best every day.”

The IKA KiteFoil World Series Cagliari brought together 42 athletes, 29 men and 13 women from 19 countries and five continents. It was the third of five scheduled acts, with the overall men’s and women’s winners crowned IKA KiteFoil world champions.

With the women racing in one fleet with the men and competing for an equal share of the World Series Cagliari prize pot, the battles between the leaders were intense with the top two spots changing hands during the contest.

But ultimately the dominance of the French team was never in doubt as they took all three podium steps. Victor, Lauriane Nolot, eventually got the better of recently-crowned Formula Kite European champion Poema Newland, with Jessie Kampman making up the trio.

Nolot’s win in Cagliari in the sometimes tricky conditions also gives her two World Series stops in succession after her victory in Austria. She was pleased to overhaul Newland who held the lead for several days.

“I can be happy with my performance,” said Nolot. “I did the job I came to do. I survived the conditions. It’s pretty good training for the Worlds as we had all conditions…”

Newland, too, took comfort from her second podium step that preserved her place in the rankings. She also used it as a learning experience that she hopes will help her eradicate the costly mistakes.

“Every day was a bad day for me,” said Newland. “I made a lot of mistakes, made bad choices about strategy, about kite size, everything. But I came here to learn and keep my place in the rankings, so I’m pleased about that at least.”

Most of the athletes will now make their way up the Sardinian coast to Torregrande, where even stiffer challenges await at the 2021 IKA Formula Kite World Championships this coming week.