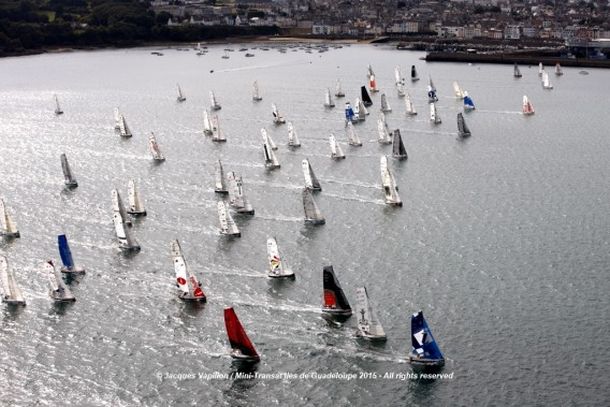 It’s hard to imagine better conditions for the start of the Mini Transat îles de Guadeloupe. The President of the racecourse fired the starter’s pistol, and the competitors launched themselves into the westerly to north-westerly 8-10 knot wind. By the end of the first part of the race in the bay, the favourites were already pointing their bows towards the open ocean.

There was enough wind to move forwards, but not too much. We couldn’t have hoped for more at the start of a transatlantic race, both for the competitors, and for the organisers. Douarnenez Bay had dressed up in its finery: blue skies, light clouds at the top of Menez Hom, dark seas…

The Mini Transat îles de Guadeloupe racers hardly had time to admire the landscape. Instead they had to watch their rivals, avoid collisions and consider their tactics for the best approach to the race in Douarnenez Bay.

After a beautiful start on the starboard side, Hervé Aubry (Ixina – Voilerie HSD) was in the lead, followed closely by the youngest competitor, Quentin Vlamynck (Arkema) and Clément Bouyssou (Le Bon Agent ! Bougeons l’Immobilier). However, it was Davy Beaudart (Flexirub), followed by Frédéric Denis (Nautipark) who were leading the fleet at the first buoy. Next, was Julien Pulvé (Novintiss) who overtook Benoît Hantzperg (YCA – Dhumeaux – Secours Populaire).

At buoy number 2, Fred Denis had taken matters into his own hands, thanks to an ingenious double tack in the direction of the coast.  Many of the following competitors took advantage of these tactics to improve their times and re-join the leaders of the fleet, including an inspired Fidel Turienzo (Satanas).Benoît Hantzperg also profited from  this windfall to  pinch first place from Julien Pulvé,  whilst Tanguy Le Turquais  manouevred his  Terréal into third position.

This was followed by a stretch of quite closed spinnaker sailing in a straining wind that forced a real break amongst the favourites in training at the centre of the fleet, particularly caused by the comfortable conditions. For others, the problem was that they had hardly experienced this type of sailing on a razor’s edge. A first hierarchy had established itself by the time they reached the buoy at Tristan island, which marks the end of the coastal run.  Ahead of them unfolded a long stretch towards the west until they crossed the Seine current. The objective was to get around a light patch sitting directly in their path, and look for a faster route by using the winds from the northwest.

Lucky for some…unlucky for others

For the majority of the fleet, the positioning in the coastal race was an epiphany, to know who to look out for in the following week.  Tomorrow, when the first night is over, each one of them will have forgotten the little miserable moments they will have during these 5,000 miles of prelude to the main race.  Even Axel Tréhin (Aleph Racing), who tried to make too tight a turn around the first buoy, and was entangled for a long time in its moorings, will have forgotten about how many positions he dropped because of his greedy attempt.

It’s another story for Nacho Postigo.  He was violently slammed against the rocks of Tristran Island when he was being towed by an organiser’s boat, and saw his hopes for the Transat dashed as well. With his keel sail damaged and the bulb mashed up, the Spanish sailor could not go straight back to the race. However, he will be able to re-join the ranks in two stages, as the crash was not his responsibility. The international jury will need to decide under what criteria he can re-join the race.  The members already know that there will be the work cut out waiting for him to do in Lanzarote.