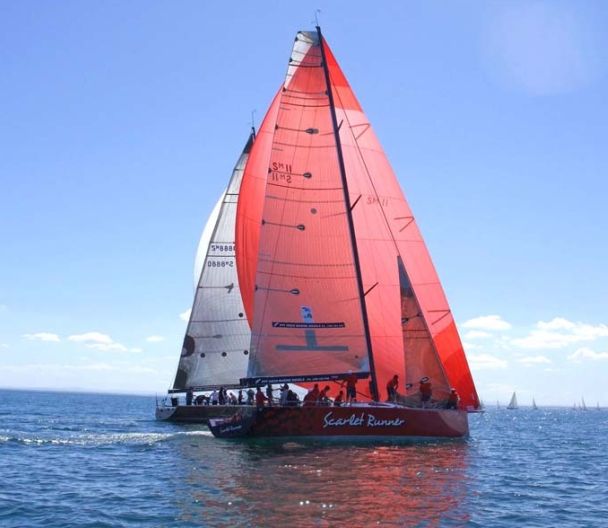 Saturday the 7th March at 4am will see a fleet of 14 yachts set sail from Queenscliff en route to Grassy Harbour, King Island.

A favourite race of the Ocean Racing Club's annual calendar, this race often delivers poor weather conditions. Not this year, with the forecast winds from the west at 20 to 25 knots it will be a beam reach all the way to King Island. Tonight’s forecast does show the winds strengthening with gusts increasing to 35 knots, consequently the race management team are maintaining a watch.

This race is much loved by skippers and crews not just for the joy of the sport but for the unfailingly hospitable reception in Grassy courtesy of the King Island Boat Club, the best steak sandwiches to be had anywhere and available no matter what time you anchor.

The 14 strong fleet this year looks competitive and with the ideal conditions handicap honours are difficult to predict. The Line Honours trophy though has the crew of Scarlet Runner excited. It’s not just the trophy itself that motivates but also the prospect of fighting for the race record which was set by sometime rival John Newbold on Primitive Cool in 2013. That time sits at a swift 09:50:21, Robert Date will need to drive his crew and his RP 52 hard but in these conditions the record  is doable.

Mornington based Adrian Lewis in his Warwick 67, Geomatic Allegro has waterline length over Date but with just three up would not normally worry him. The prospect of a beam reach does however make life marginally easier and will suit Lewis for the journey. Geomatic Allegro is new to the ORCV world having competed in the Sydney Hobart race last year and is something of an unknown quantity, we will all be watching with interest.

Skippers and crews are watching the weather as they sail down the bay tonight trusting that the BOM have got it right.

The start as always has been dictated by tides at The Heads and will be at 4am Saturday morning.  Race management are hoping to see that first finisher sometime after 13:00 and the rest of the fleet before midnight.

After a clean 4am start from Queenscliff the 14 strong Melbourne to King Island Fleet are carving up Bass Strait in the 20 – 25 knot westerlies.  As predicted the fleet has a beam reach to the finish line making for ideal sailing conditions.

Scarlet Runner skippered by Robert Date is on target for a Race record finish and for a win in the major handicap divisions.  The RP 52 is a well sailed and confident machine and they are doing the job  in today’s conditions.   King Island does have some tricky currents, depending on the tidal flows so without care the record could be won or lost in the last run to the line.

The performance handicap prize is being hotly contested by Ian Lewis’s Blue Chip and Laurie Ford’s Spirit of Downunder.

All crews will be enjoying the ideal conditions pushing their boats for top speeds. Race Management is hoping to see Scarlet Runner on the finish line before 2pm.