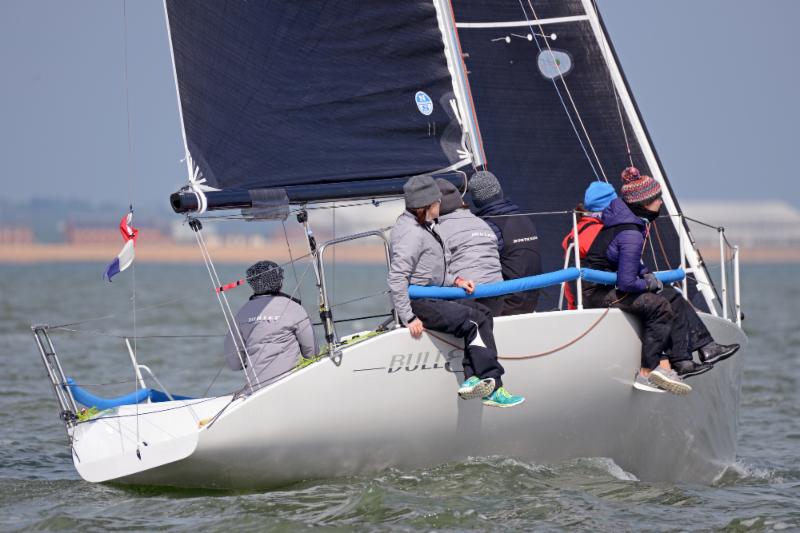 Day 2 of racing at the Vice Admiral's Cup delivered four short, sharp races that tested the 72 competing boats and hundreds of sailors over a wide range of conditions, on a day of intensely close racing in a very shifty 10-15 knot north-north/westerly breeze with gusts above 20 knots, amid a number of lighter spells.

“Today was really enjoyable with great racing and good courses set in tricky conditions,” said Christopher Daniel whose J/122e Juno is leading the Performance 40 class. “It was a big challenge to make sure we stayed in phase with the 20-25 degree wind shifts, but it was champagne sailing. We all came ashore with big smiles.”

In the first race of the day for the Quarter Ton class, Sam Laidlaw's Aguila, Louise Morton's Bullet and Tony Hayward's Blackfun lined up together at the start, but just before the gun Aguila and Blackfun bore away hard, leaving Bullet as a premature starter two lengths ahead.

At the finish, Julian Metherewell's Bullit held a lead of 18 seconds on yesterday's winner, Ian Southworth's Protis, although this reduced to just eight seconds after time correction. Morton finished seven seconds behind Southworth to take third on the water and on corrected time.

However, Metherewell was not able to repeat his early performance in the following races, where he took third, fifth and ninth places. By contrast, Morton notched up a pair of wins and a second place to take the overall lead one point ahead of Southworth, with a discard applied.

In the first three races today, Glyn Locke's Farr 280 Toucan asserted dominance in the HP30 class, with a 2, 1, 5 scoreline to take a slender overall lead. However, he started prematurely in the final race of the day, despite attempting to duck behind the line before the gun.

Locke hadn't recovered by the end of the first lap, rounding the leeward gate before even hoisting the jib. Nevertheless, he had an impressively fast second lap, finishing second on the water, a length ahead of Malcolm Wootton's Farr 30 Pegasus.

Toucan protested Pegasus for a windward/leeward boat infringement on the approach to the finish, which saw the latter disqualified.

Meanwhile, Tim Cunliffe's Farr 30 Insatiable had sailed a stunning race, having been first away at the pin end of the start line and finished with a lead of 59 seconds.

The J/70 class joined the action for the first time today, with the fleet enthusiastic to get away. Five boats – Andrew Barraclough's Jenga 8, David Atkinson's Rascal Racing, Patrick Liardet's Cosmic, Doug Streuth's DSP and Adam Munday's Ocean Rope – were all called over at the start of the first race.

This left the way open for Paul Ward's Eat, Sleep, J, Repeat to pull out an impressive 10 length lead by the end of the first beat. He was followed by Charlie Thompson's Brutus and Cosmic, even though the latter also lost out through over standing the first mark.

Ward finished more than a minute ahead of Clive Bush's Darcey, while Cosmic took third just four seconds later. DSP won the next race, but slipped down to 11th in the third. The final race of the day saw Darcey take a commanding win, ahead of Brutus. In the tightest of finishes, Philip Rees' Bryn took third place just three seconds later, and DSP fourth, seven seconds later.

In the SB20 fleet Charlie Whelan's Breaking Bod has so far sailed a superbly consistent series, with four second places, plus a win in today's third race. Christian Sutherland's Reach Around had started the regatta even more strongly, with three straight first places, before slipping to fifth and sixth in today's last two races.

With a discard applied, Whelan leads the fleet overall, one point ahead of Sutherland, while Rob Kirby's Carnage and Charles Sheppard's Sharc are tied four points further back.

The third race of the day saw fast-paced action in its closing stages as a shower swept across the race area. With the wind speed peaking beyond 20 knots the leaders powered to the finish in full planing mode.

Approaching the finish Arabella gybed onto starboard right ahead of Zephyr, who had to take avoiding action, and the on-water jury issued a penalty turn to Arabella. Meanwhile, Tokoloshe took first place three seconds ahead of Zephyr.

As the wind rose still further, Girls on Film crossed the line neck and neck with Arabella, with her spinnaker flogging after a late gybe. Ran was closing quickly, but with nowhere to go between Girls on Film and Arabella similarly had to dump her spinnaker sheet to avoid a collision, or missing the finish entirely, and had to settle for fifth place.

The final race for the class, held once the wind settled after bright sun returned to the central Solent, was around the cans. Ran and Girls on Film dominated the fleet, with the former taking victory by just five seconds, while Arabella took third almost four minutes later.

The Performance 40 class raced for the first time today, with two King 40s – Roger Bowden's Nifty and Michael Blair's Cobra – taking four of the nine podium positions in their first three races. However, neither could match Christopher Daniel's Juno, which rose to an early overall lead with a second place followed by two wins.

Ian Schenkel's Ker 39 Rumbleflurg also showed good promise, with podium places in two races, but fell to mid fleet in the other two. Meanwhile, a start line collision between Cobra and Nifty in race three saw the latter disqualified in the protest room. Juno is therefore leading the class on four points, with Cobra second on five and Nifty third on 10 points, having discarded the race in which she was disqualified.

Tony Mack's McFly asserted near dominance in the J/111 fleet, taking two decisive wins and two second places. The winner of yesterday's race Joerg Sigg's Lallekonig took a 30 percent points penalty for an infringement in race 3, and now lies one point behind McFly in the overall standings.

Competition further down the fleet is equally strong in this class, with Chris Jones' Journeymaker ll on 14 points, and both Jan Van Berne's Red Herring and Cornel Riklin's Jitterbug on 15 points going into the final day.

Chris Preston's J/109 Jubilee started the day with back to back race wins, and took second in the next two, but with a discard applied Simon Perry's Jiraffe retains a single point advantage in the overall rankings. Mike Yates' Jago also notched up three podium finishes today, but slipped to sixth in the penultimate race and is eight points adrift in third overall.

Racing will conclude tomorrow, when lighter winds are again expected.